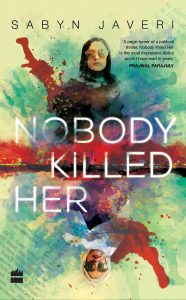 In Pakistan, truth can be stranger than fiction. Conspiracy theories can acquire the fervour of religious belief, particularly 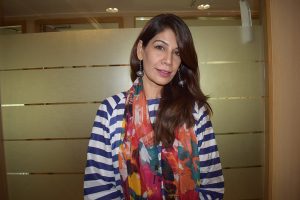 when political leaders die of unnatural causes. A work of fiction based on real events, can attain an uneasy and bizarre verisimilitude with what readers believe has actually happened.

An ambiguous interface between truth and fiction lies at the heart of Sabyn Javeri’s novel, Nobody Killed Her. The storyline is based on the relationship between two women who live in close association with one another. Rani Shah is political heir apparent to her late father’s legacy as leader of the nation. She is born into privilege. Nazo Khan works for Rani Shah. Her role varies from that of servant, personal assistant, confidante and sporadic lover.

The story traces the evolution of their relationship from the time Rani Shah is a young, idealistic and progressive-minded woman in exile from Pakistan and living in New York. She is awaiting the right moment to re-enter Pakistani politics in order to reverse the fundamentalism that has taken root under the tenure of a military dictator. Nazo also lives in New York. She introduces herself to Rani as a political refugee; the dictator had her family murdered and she had to run for her life.

Nazo’s apparent idolisation of Rani and her efficient management of political and personal matters earns her a special space in Rani’s life. She becomes part of the household and this arrangement continues even after their return to Pakistan. This allows Nazo a vantage position, from which she can keep a close watch on Rani and even manipulate her life. For under her hijab, Nazo is a supremely ambitious and calculating woman. Her wily manoeuvres place her in an increasingly complex web of circumstances that, more often than not, invite risk and reprisal on herself.

The novel is structured in short and unnumbered chapters. Each chapter opens with a segment of a dramatic court trial in which Nazo is the defendant, on trial for her alleged role in the assassination of Rani Shah, and for espionage. The prosecutor’s onslaught is chillingly robust. The main text of the novel is in the form of a narrative recounted by Nazo of her life from the time she encounters Rani, through the years of their convoluted and emotionally contaminated cohabitation, until the climactic assassination towards the end of the novel. Nazo’s own voice is a compelling one. Her recall is presented in the second person singular voice, as if she is addressing Rani.

The flashback, through Nazo’s account, shows the toxic trajectory of the relationship between the two female protagonists. The storyline succeeds in depicting devotion and betrayal as two sides of a passionate over-involvement with another individual’s life.

The novel is a biography of sorts of two women’s lives, but Rani Shah is known to the reader only through Nazo’s point of view. Her character, therefore, comes across as aloof and enigmatic.

The plethora of incidents Nazo encounters makes the narrative overly detailed at times. But as a character, she opens up an ambiguous space where the protagonists, along with the tangled situations they work their way through, acquire a shape-shifting quality. In one of the more philosophical passages in the novel, Nazo declaims: “Why is it that every time we think we have found the one thing that will make us complete, we change shape. The piece no longer fits or if it does, some other part dislodges. Perhaps we can never be whole.”

Sabyn Javeri has always emphasised the fictional aspect of her story despite the resemblances to Benazir Bhutto’s life. She has stated her intent to show how women can be victims and protagonists within patriarchal power structures in traditional societies, which grant no forgiveness to women who are perceived as transgressors of boundaries. Transgression is a pervasive theme in the novel; all characters in the book give in to varying degrees of expediency. And the author denies moral authority to all.

Nobody Killed Her is an easy book to read as a political thriller. However, it challenges the reader’s subjective assumptions of where truth ends and fiction begins. In our national psyche, so much of what is presumed to be true is at best presumption or hearsay. These tenuous constructs become the framework on which we construct our skewed vision of reality. Homegrown works of fiction become springboards for discussing uncertainties. Sabyn Javeri’s novel will play an important part in furthering this discussion.