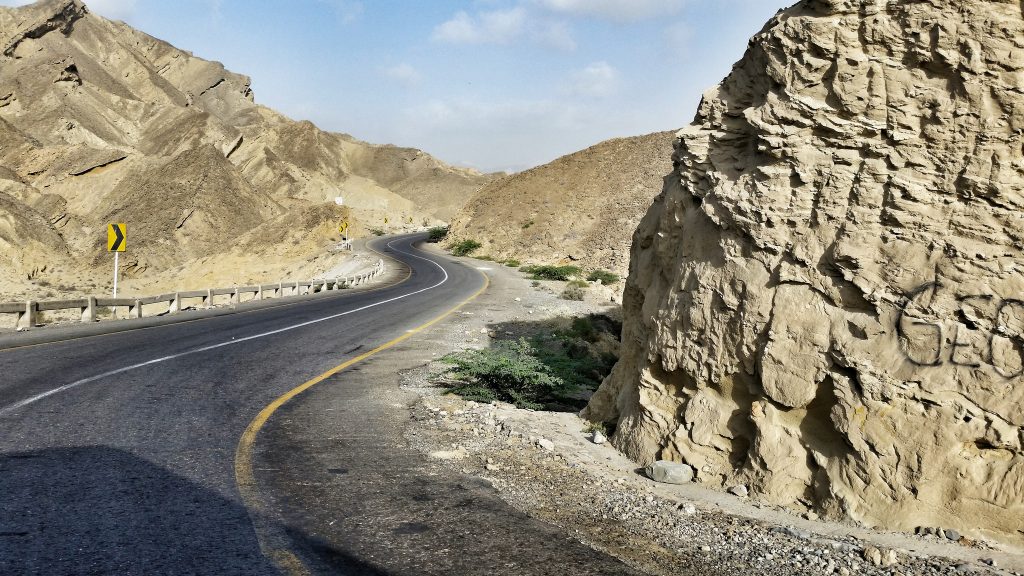 It was a bright but cold day of January last year, when five youngsters left Quetta for Bolan on a picnic. They were jubilant and enjoying the trip to the fullest when their vehicle collided with another one coming from the opposite direction, while overtaking. Since there was no emergency medical service facility available on the Quetta-to-Sibi Highway, all the five injured were transported by other commuters to Quetta. Among the five, Kamran Mengal, who was a Central Superior Services (CSS) candidate and among the brighter students in his family, died due to excessive bleeding near Hazar Gunji area before reaching Quetta.

This is not just a one-off incident; such mishaps happen on a routine basis on the Balochistan highway. But this case made it to the limelight because civil society in Balochistan used this as a test case to demand that the government establish life-saving medical units on highways. Presumably, this demand fell on deaf ears.

There are five main highways in Balochistan: the Regional Cooperation for Development (RCD) Highway, the Makran Coastal Highway, the Quetta-Jacobabad Highway, the Quetta-Zhob and the Quetta-Chaman Highway. Among these, the RCD Highway, which runs from Taftan, near the Iran Border, to Quetta and then to Karachi, is the place where the majority of the accidents take place. In the month of April alone, more than 15 people had died, in five accidents on this highway. The accident figures, and the casualties caused by them, speak volumes about the gravity of the problem. According to the data acquired by the Home and Tribal Affairs Department of Balochistan, in 2014, 240 perished in highway accidents in the province. In one particular accident on March 22, 2014, 40 people lost their lives when an oil tanker rammed into a passenger bus on the RCD Highway, near Gaddani.

It is never easy to get data on anything in Balochistan and this includes highway accidents. For the year 2016, data on highway accidents is available for districts Khuzdar and Lasbela — where the majority of the accidents occur. Around 57 people lost their lives in 51 accidents in Lasbela district, whereas 103 people lost their lives in 87 accidents in Khuzdar district. Among them were the son and brother of the current deputy commissioner of Lasbela, who were killed in an accident near Khuzdar, in December. In fact, on the very day this report was written, a local government representative of Kalat, Dhani Baksh Zehri, lost his life in an accident on the RCD Highway.

The loss of life in highway accidents is exacerbated by the poor healthcare facilities in Balochistan. In the case of accidents on the RCD Highway, victims have to be transported either to Quetta or to Karachi. This can take several hours and the majority of the deaths take place due to excessive bleeding and the lack of timely medical first aid. Despite the growing number of accidents on its highways, the Balochistan government has not established a single trauma center on any of the highways.

An investigation into the background of the accidents and conversations with survivors reveal that there are a multitude of reasons for the rampant highway accidents in the province, the first being that all the highways in Balochistan comprise single carriageways. This means that highways have two narrow lanes and there is no divider between them. A majority of the accidents are caused due to desperate attempts to overtake, which prove to be fatal on single carriageways. Secondly, the National Highway Authority (NHA) has not installed safety signboards and equipment on all the dangerous turns on highways in Balochistan. As a result, drivers often are not cautious at turns where they should be. Thirdly, the National Highways and Motorways Police (NH&MP) does not have a strong presence on the highways of Balochistan. According to the data acquired from the website of the NH&MP, while the total length of highways in Balochistan is 3,600 kilometres, the NH&MP has its apparatus on a 355-kilometre strip of the RCD Highway and a 160-kilometre portion of the Coastal Highway. This means that only 18 per cent of the highways of Balochistan are regulated by the NH&MP. As a result, there is no system of checks-and-balances on the drivers and the overall transport system on the highways. For light terrain vehicles, the speed limit is 100 kilometres per hour, but reckless drivers travel at speeds of up to 150 kilometres per hour, not only endangering their own lives, but also those of commuters travelling in the opposite direction. 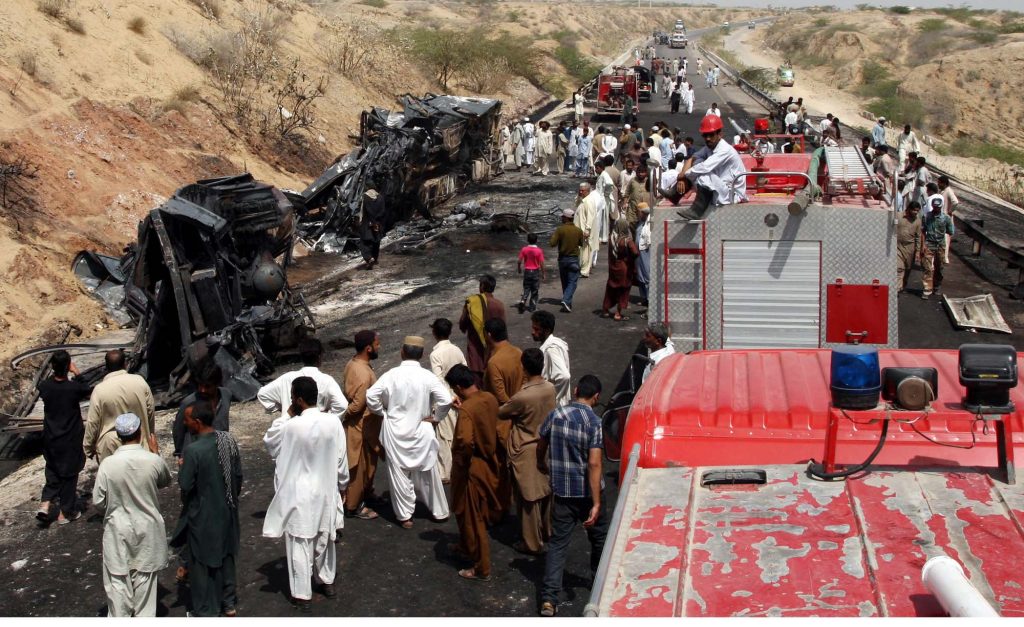 In addition to this, one can witness an unending flow of trucks carrying large stones on the RCD Highway. These large stones are transported from Khuzdar district to Marble City, in Hub. According to district administration officials, the trucks carrying gigantic stones are also a major cause of accidents, because vehicles can collide with these stones which tend to protrude from the sides of the trucks.

Haji Kabir Ahmed, a transporter who has spent more than 10 years in the industry, agrees that the narrow width of the roads is a major cause of accidents. “Sometimes, passenger buses running out of time, over-speed and while overtaking, collide with traffic coming from the opposite side,” explains Ahmed. “Accidents caused due to overtaking will cease to take place if these highways are turned into dual carriageways.”

Ahmed, whose buses transport passengers on the RCD Highway, also admits that careless driving by over-worked and underpaid drivers is also a cause of accidents. He, however, pleaded that such drivers are in a minority and it will not be fair to blame every highway accident on transporters and drivers.

The Provincial Transport Authority (PTA) is the provincial body responsible for issuing permits to passenger vehicles and regulating their conduct on highways. It is also responsible for inspecting passenger vehicles and renewing licenses. However, as is apparent from the number of rising accidents in Balochistan, the PTA does not seem to be doing its job properly. A senior government official who has served in PTA, told Newsline on condition of anonymity, that the PTA is almost entirely dysfunctional. “The PTA suffers from a lack of manpower and infrastructure to properly conduct its job,” shares the official. He further explains that under the present circumstances, no one should hope that PTA will play any role in mitigating highway accidents.

“We are doing our best with the available resources and we hope that we will be able to control highway accidents in Balochistan,” says SSP Farrukh Rashid of the NH&MP, while talking to Newsline. He maintains that the NH&MP is vigilantly measuring the speed of vehicles and issuing tickets for over speeding, overloading and other violations. Asked if the narrow roads are the leading cause of highway accidents, he replies, “They are indeed a cause, but now highways will be widened under the China-Pakistan Economic Corridor (CPEC) and the problem will be resolved.”

Moreover, the CPEC, a so-called ‘game changer,’ has over $10 billion allocated for infrastructure development. It is being hoped that due to the CPEC the province’s highways would be widened and converted into dual carriageways, like those in Sindh and Punjab. However, so far not a single highway has been upgraded to a dual carriageway in the province. Even the much-touted M8 which connects Gwadar to Ratodero via Khuzdar, is a single carriageway road, lending weight to the assertion that the CPEC will not make much of a difference in the life of the common man in Balochistan.