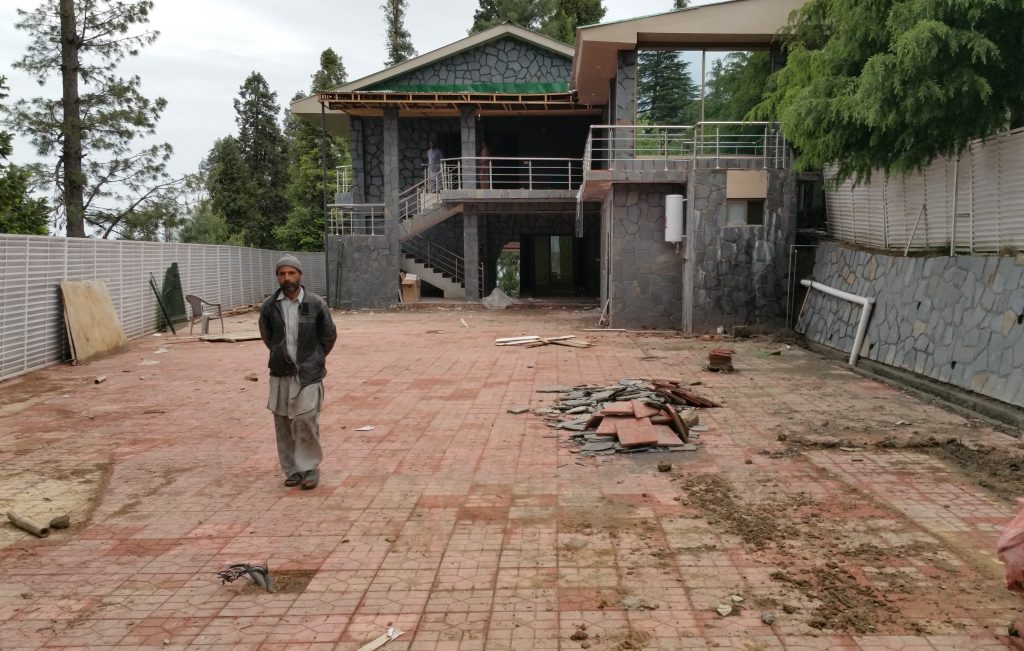 What was once a forest is now an annexe of the Khyber Pakhtunkhwa House. 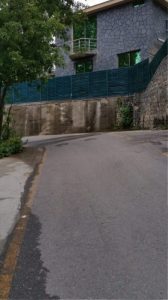 There are visible signs of improvement and order in the beautiful and cool valleys of Galiyat. A popular tourist destination extending on both sides of the Khyber Pakhtunkhwa-Punjab border, between Abbotabad and Murree, it comprises summer hotspots like Nathiagali, Dunga Gali, Changla Gali, Thandiani and Ayubia. The roads are broader, cleaner and well painted. Truants have given way to well-dressed children, who attend school even when it involves travelling long distances. Teachers and doctors are present at their places of duty even in the remote rural areas. The police appears alert, helpful and professional. The pineline track from Dunga Gali to Ayubia, a stunningly scenic mountain-hugging trail, is cleaner and better maintained than it ever was. In short, something right has begun to happen within the management of the Galiyat Development Authority (GDA). Optimism and appreciation would, therefore, not be altogether out of place.

However, there are several compelling reasons to ask the GDA to pause for a moment and reconsider its course of development. Cementing of natural trails, unending construction of palatial homes for the rich and the powerful, allowing of smoke-emitting vehicles to engage in endless motoring up and down the winding slopes, focusing on building food streets, hotels and homes that emit raw sewage down the slopes, and dumping of garbage on the sides of the slopes to keep them out of the view of the motorcades of the elite are not the best ways of building or preserving natural forests and hill stations.

Narrow, winding ‘katcha’ trails, naturally developed over hundreds of years, laden with fallen leaves, forage and roots, were always a great attraction for walkers and hikers who came up to the Galiyat forests. Many of these have now been needlessly paved with concrete tiles for miles at length, destroying their natural beauty, feel, flora and fauna. The only beneficiaries of all this are the contractors, the contract developers and the tile-manufacturers. Galiyat’s pristine forests are being urbanised with sand and cement. This practice ought to be stopped on an urgent basis. Every single brick amounts to chipping away a small piece of the forest. 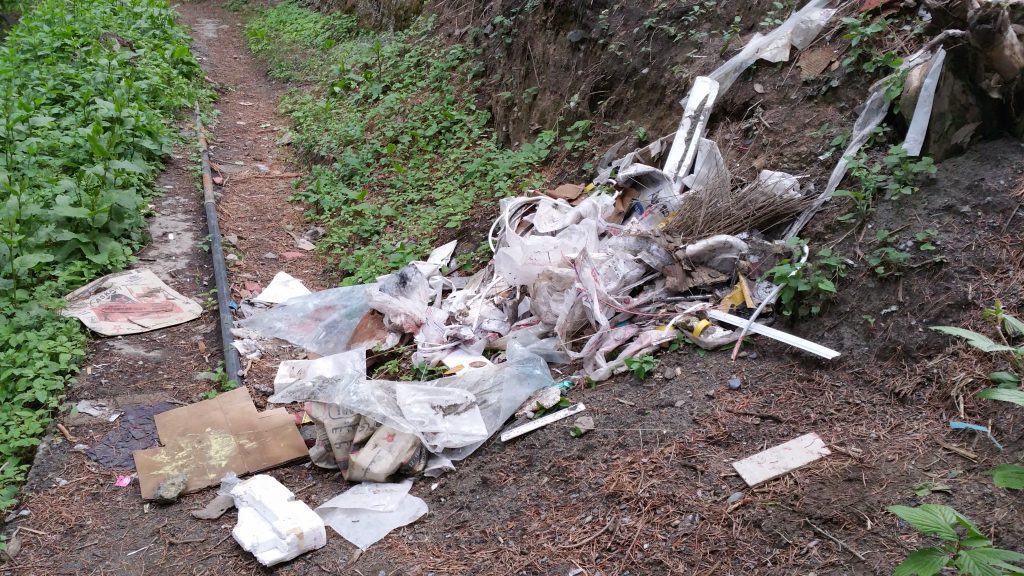 Garbage dumped on the side of the Khyber Pakhtunkhwa House 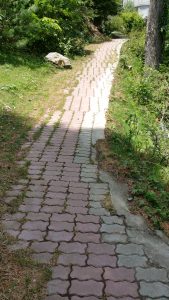 Unnecessary tiling of a natural pathway.

The prime land of Nathiagali and Dunga Gali, which belongs to Pakistan and its future generations, is being allotted (read gifted) to the rich and the powerful elite. And the contractors, or should I call them marauders, are working at a frenetic speed — as if in competition with Bahria Town — to rapidly transform these pristine forests into ostentatious homes that will serve as getaways for the elite for a few days every year. It is criminal of the GDA and the Khyber Pakhtunkhwa government to allow the country’s common heritage to be plundered in this fashion. And that’s not the end of their criminal neglect.

The GDA has made very little effort to discipline the houses and hotels that emit raw sewage down the trails and slopes of the mountains. This illegal and environmentally destructive practice has gone on for years, and some of the biggest hotels are the ones creating the biggest mess. Shouldn’t the GDA be clamping down on all such premises that do not have an approved septic-handling tank?

The 9,400-feet high Mukshpuri peak may well be considered a small extension of heaven on earth for its beauty and serenity. But unlike heaven, the path leading upto Mukshpuri is not paved with good intentions — rather plastic bags and bottles litter the beautiful landscape. There is no garbage disposal system in place.

Fortunately, the main roads appear cleaner than before and a substantial number of garbage drums are in place. However, the disposal of garbage by tossing it across the fence or the slope continues to remain a common practice. Unless heavy fines are imposed on the defaulters — tourists, residents, and mushrooming hoteliers, who dump any solid or liquid effluent in their surroundings — the area will soon turn into a junkyard. 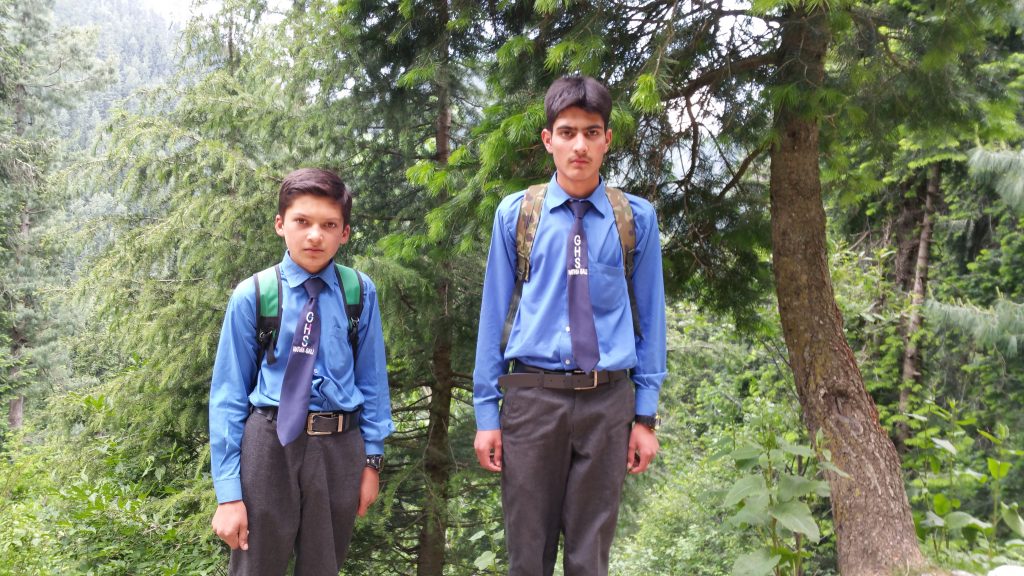 Schoolboys walk many miles from their village to their school in Nathiagali.

Interestingly, most of the motorists who visit Nathiagali daily, appear to do so only to practice for their impending driving tests. They hardly ever seem to stop revving up their already over-worked engines or step out of their vehicles for a walk. Emitting poisonous smoke and playing music full blast, these shrieking ‘metal containers’ jolt not just humans, but animals, birds, butterflies and insects as well. The GDA seems to have no clue of how to preserve the serenity of the forests so that people are encouraged to walk. Most areas, other than the bazaars situated on the main roads, ought to be declared ‘no-vehicle’ zones. This is possible only if there are sufficient car parks that operate as ‘Park and Walk’ places, similar to the the ‘Park and Ride’ locations in other countries.

The desire to destroy forests by transplanting an urban landscape is entirely inexplicable. The garbage, gluttony, crowding, noise, smells, smoke and commercialism associated with food streets all over the world is well known and despised. Nathiagali may prove to be the sole forest in the world that is trying to “improve” itself by building food streets. The organic and plastic waste generated by these food joints will only multiply the speed of environmental degradation. Clearly the GDA seems conceptually confused: Do its initials stand for “Galiyat” or “Greed” Development Authority?