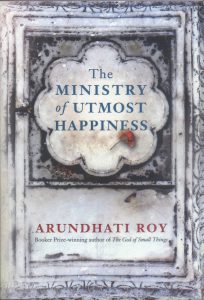 The road to The Ministry of Utmost Happiness is lined with garbage dumps, graveyards and impromptu squatter 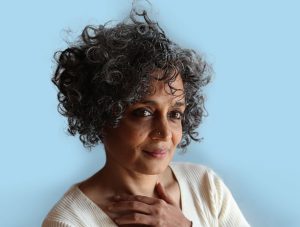 settlements. It lies beyond the tree-lined boulevards and lush green roundabouts of the posh localities of New Delhi; beyond the conventional notions of what is considered acceptable or respectable, in the social and cultural framework of South Asia. It is a space occupied by those who have been abandoned or rejected, either by their parents or by their communities, out of a sense of shame. The lives and times of these outsiders are the focus of Arundhati Roy’s second novel, which appears 20 years after her first, The God of Small Things.

Out of the vast ensemble of colourful characters encountered in the story, it is the lives of Anjum, a transvestite and Tilo, an architect, that carry the most weight. Anjum, a hermaphrodite born into a conservative lower-middle-class Delhi home, is torn between a dichotomy of desires (described by her transgender friends as “Indo-Pak tensions”), owing to her sexual orientation. On the one hand, she wants to extricate herself from the real world, the “Duniya,” where she is being raised as a boy, and live in the Khwabgah — a transgender commune — while on the other, she longs to fulfil her motherly instincts by rearing a child. Anjum is doubly rebellious: she challenges the conventions of the nuclear family as well as those of the transgender community.

Tilo, an artist and intellectual, was born into an aristocratic family, after her celebrated mother had a scandalous love affair with a man of “low caste.” As such, Tilo has been damned from birth, to rejection and dishonour. Under a rigid caste code, the mother could not keep offspring conceived in such a manner. And so, she creates the impression that the dark-skinned Tilo is not her biological child, but an adopted one. Whether she does so purely for practical reasons, or to avoid embarrassment, or both, remains a grey area. Similarly, Anjum’s mother was horrified to discover her unusual sexual anatomy after her birth and tried, at all costs, to cover it up and groom her as a boy.

Roy’s work contains what cannot be found elsewhere; not in the news, not on social media, not in conversations between people, not in academia — nor can it be found in “meditation classes” or “yoga practice.” It is the inconvenient and unglamorous underbelly of South Asian culture; the developments, events and feelings that lack templates of description and reference. The novel’s emphasis on the squalid surroundings and filthy details of everyday life are a metaphor for this. Could the acknowledgment of this ugliness, inherent in the environment and within us, be the first step towards the ministry of utmost happiness? Anjum, Tilo, Saddam Hussain, the Dalit butcher, and Dr Azad Bhartiya, the Marxist revolutionary, are some examples of characters who have broken free — whether by choice or not — from the pressures and expectations of the “Duniya,” and therefore are driven less by notions of shame, or pity, than those living within its confines.

The novel uses imagery to jog the reader’s memory. Descriptions of sights and sounds are repeated in the story, in diverse contexts, encouraging the reader to try and form connections or parallels, or try and spot similarities between distant situations. And through it all, the spectre of “Gujarat ka Lalla” (a reference to Narendra Modi), constantly lurks on the horizon and eventually comes to power.

The violence in Jammu and Kashmir is analysed from the perspective of those on the ground — the civilians, the militants, the intelligence bureau, the army — and not the newspapers, which “altered” reality, “to suit readers’ appetites and expectations.” It is not the first time that the media has been portrayed as a predatory and unethical creature. Musa, a likeable character to whom we can all relate, unexpectedly joins a militant outfit in Kashmir and does not appear to lose his humanity or integrity by doing so. We are shocked less by the person of Musa than by life’s ability to inflict transformational scenarios and also perhaps by the fact that the Indian military and intelligence have close ties with militant outfits in Kashmir.

The concept of time itself is played with. A large section of Anjum’s life —from birth to middle-age — is covered in the early part of the book, by the end of which one feels the novel could easily have ended. Thereafter, the narrative becomes non-linear and switches, at points, from third person to first person. We are provided with the full contents of Tilo’s scrapbook, consisting of personal notes as well as cuttings of newspaper reports on Kashmir. At the bottom of each report, she asks a series of questions — the kind of questions that come to the minds of many newspaper readers, and the answers to which lie beyond the narrative of mainstream media.

The daily lives of squatters are described in such detail that one wonders whether Roy closely watched and followed the neglected denizens of her hometown for several years. The art of setting up makeshift settlements, which then blossom into a new hope of sorts, is deliberately portrayed as somewhat absurd and comical. The novel’s dark, dystopian and, at times, surreal atmosphere is countered with scenarios of extreme hilarity, where readers will find themselves laughing out aloud.

The writer is an Assistant Editor at Newsline. He is on Twitter @aliHbhutto