In her show The Country of Last Things, Huma Mulji has stepped out of the taxidermist’s studio, leaving behind the voluminous forms of large animals previously sculpted by her into improbable positions as an expression of postmodern angst.

In an exhibition of what she calls “smaller, quieter works,” Huma has opted to use the medium of narrative photography to document realities she sees in the streets around her home in Lahore. The photographs are accompanied by section panels that provide an explanatory context for the images and also give clues for the sub-textual narrative that is more conceptual than visual.

The only concession to taxidermy in this show comes in the shape of a stuffed sparrow. Upright and seemingly alert, it perches on top of a grimy plastic chair which has a broken leg resting on flat stones in order to steady it. This hybrid composition of preserved and inanimate objects called ‘The Flight’ is the sole sculpture among several photographic documentaries printed in colour. The cobbled appearance of this sculpture reflects the idea ofjugaar or makeshift solutions, so ubiquitous in the country. 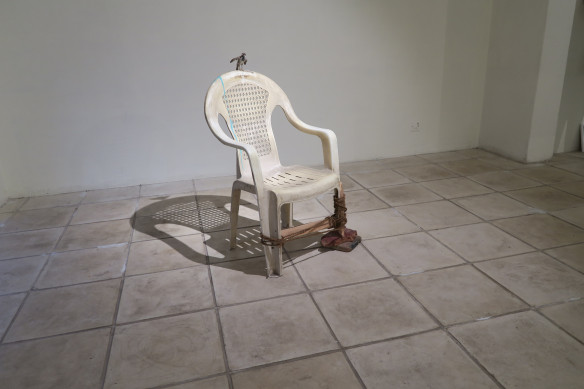 In each of the documentaries, Huma connects the people in the images to the social hierarchies within which they function. Therefore, she is constructing a visual narrative and linking it with a story that is non-visual. It is the art of truth-seeking or as Herbert Marcuse has said: “The truth of art lies in its power to break the monopoly of established reality to define what is real.”

The series, ‘Conversations with Karamutullah,’ showcases Karamat the baker from whom Huma used to buy bread. His blackened baking tins and shabby, sunless rooms nonetheless succeed in producing the most delicious bread — Huma attests — baked according to an old British Indian Army recipe that Karamat has learned from his father. The chair used to construct ‘The Flight’ has been acquired from Karamat. Additionally, there is a framed obituary notice for the death of Karamat’s father.

The sense of history, the passage of time, is palpable in this series as is the feeling of obsolescence. Processes continue but only just. The thrust of renewal lacks vigour and there is the ominous fear that continuity may terminate given the challenges that need to be surmounted. But at the heart of the matter is a human being who keeps processes alive, and is at the same time, vulnerable to the larger environment that can alter his ability to function.

In ‘A Study of Equilibrium,’ 21 sanitary workers are shown on their bicycles, balancing their long bamboo poles on one shoulder as they move through the streets of Lahore. The graceful arcs of the long poles are pleasing, unlike the messy purpose for which the poles are deployed to unclog the city’s sewers. Each image in the set is similar and yet nuances vary. The angle of the poles, their curves and the riders’ postures differ slightly as they maintain critical balance while in motion. Moreover, the group is comprised of individuals.

There is a small metal shield affixed to each image naming the specific worker. In this way, these stalwarts of the sewers are brought out of an anonymous state and given individual identities.

‘The Drycleaners’ is a whimsical series that features army batmen riding on bicycles and carrying starched and ironed uniforms. The inert uniforms in the process of being transported contrast humorously with the self-importance of the officers who will fill out these clothes. 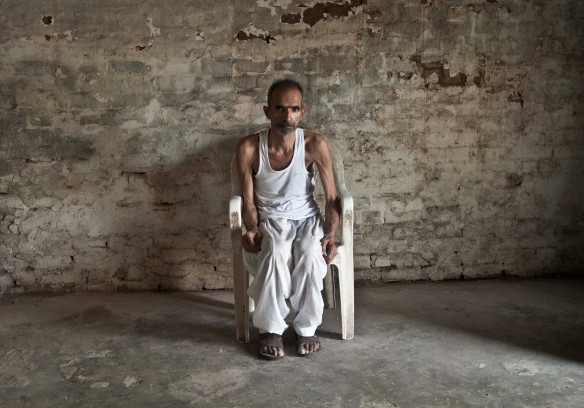 Huma is bringing up the matter of agency. What elements enable society to remain on track and what are the counter-forces that disrupt these elements from succeeding? Clearly the subaltern comes forward as the hero whose efforts keep entropy from engulfing balance and order.

The title of the show — In the Country of Last Things — is taken from Paul Auster’s novel in which a dystopian society has lost order, memories and words. Through photographic images accompanied by words, Huma has tried to document the persistence of these three essential attributes that a society needs to maintain equilibrium. The narratives may be presented on a “quieter” scale, but they draw attention to deep disquietude.

This review was originally published in Newsline’s March 2016 issue.