More than 20 months after the launching of the military operation Zarb-e-Azb against local and foreign militants in North Waziristan, its last phase was undertaken on February 24 when army chief General Raheel Sharif paid a visit to the militants’ last stronghold of Shawal valley.

Sharif, due to retire from service in November after his three-year stint, was quoted by the military’s mouthpiece, Inter-Services Public Relations (ISPR), as saying, “Commence forthwith the last phase of the operation which aims at clearing remnants of terrorists from their hideouts in deeply forested ravines, isolate them and indiscriminately sever their links with their abettors anywhere across the country.”

He led the battle cry while addressing the troops in the forward positions in Shawal, a long valley stretching from South Waziristan to North Waziristan and also into Afghanistan’s Paktika province. As the pictures showed, in the background was the mountainous terrain. The tall, well-built general was seen raising his fist while responding to patriotic slogans by the soldiers. Such displays of bravado during his frequent visits to the frontlines have been a hallmark of General Raheel Sharif’s command of the army. This has contributed to his popularity, which was witnessed when rallies in his support were organised and demands were made by certain politicians and sections of the media that he should withdraw his surprise announcement not to seek an extension in service.

No timeline was given when Zarb-e-Azb was launched on June 15, 2014 in North Waziristan and then followed by the military operations ‘Khyber 1’ in Bara and ‘Khyber 2’ in the Tirah valley of Khyber Agency in October 2014. Again, no timeframe has been given as to when the Shawal valley will be cleared of the militants to effectively bring to an end the major combat operations in the Federally Administered Tribal Areas (FATA) bordering Afghanistan. General Raheel Sharif has already announced that 2016 would be the year of conclusion of militancy in Pakistan and all efforts are geared toward achieving this rather difficult goal. He is keen to accomplish the mission before he retires so that he could end his long military career on a victorious note.

General Raheel Sharif has also timed the repatriation of all the internally displaced persons (IDPs) to their homes and villages in Fata to his retirement date by instructing his operational commanders to ensure that the task is completed by November. Earlier, the government had drawn up plans to send back the almost two million IDPs to FATA by December 2016. According to Sardar Mahtab Ahmad Khan, who resigned as the Khyber Pakhtunkhwa Governor on February 10 to revive his career in parliamentary politics after serving for 22 months, about 900,000 displaced persons have already been able to return home to Khyber, Orakzai, Kurram and South Waziristan and North Waziristan tribal agencies. There have been delays in repatriating the IDPs due to the wavering attention to their plight by the government, the delayed delivery of funds and general lack of resources.

Shawal valley is part of the Dattakhel sub-division and the whole area was a bastion of the militants, particularly those fighting under the command of Hafiz Gul Bahadur, who had signed a peace treaty with the government in September 2006 and then renewed it a few times as he focused his attention on fighting against the US-led foreign forces in neighbouring Afghanistan, refraining from attacking the Pakistani security forces. The peace accord fell apart when the Pakistan military undertook Zarb-e-Azb and forced Hafiz Gul Bahadur to flee across the border to Afghanistan. Most of his fighters reportedly shifted to Shawal and they would now be in the sights of the troops engaged in the air-cum-ground offensive in this remote and forested valley. Air strikes have been continuing in Shawal and the rest of Dattakhel for sometime now to degrade the capabilities of the well-entrenched militants before undertaking the ground offensive and delivering the final blow. 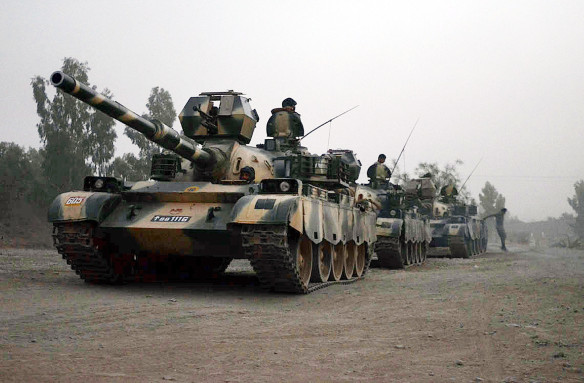 According to military sources, the troops have already occupied most of the mountain peaks and other vantage points in Shawal and now needed to advance to the northwest of the valley and clear the militants holding out. The troops would have to advance cautiously to avoid snipers and any improvised explosive devices (IEDs) that may have been laid by the militants. One of the major challenges would be to stop infiltration from Afghanistan, where the militants seem to be having a free run due to the unwillingness or inability of the thinly stretched and beleaguered Afghan security forces to monitor the long and porous Pak-Afghan border, also known as Durand Line.

Apart from Shawal, a few other small valleys, including Rajgal and Kachkol in Tirah, Khyber Agency, on the border with Afghanistan, are also infested with militants as there has been no ground offensive there yet. Airstrikes have continued in these valleys sited close to the Spinghar (White Mountain) that draws its name from its perennially snow-covered peaks and serves as a boundary between Afghanistan and Pakistan. The military has cleared most of the Tirah valley, once inaccessible and unadministered and now being linked to Bara, Peshawar and other places by new roads and bridges. The green and beautiful valley is waiting for its displaced population to return and resume life to benefit from some of the new infrastructural facilities. The recent re-opening of the iconic Bara Bazaar after remaining closed for almost seven years due to the military operations was also a happy occasion for the long-suffering tribespeople and an evidence of the return of normalcy in this part of Khyber Agency located uncomfortably close to Peshawar.

While the military action has dealt a major blow to the militants and evicted them from almost all their strongholds, their presence just across the border in Afghanistan continues to pose a threat to Pakistan. The ability of the Tehreek-i-Taliban Pakistan (TTP) and its splinter groups to send young men on suicide missions to strike at both hard and soft targets in Pakistan is a matter of concern and not easy to fully counter unless the Afghan government agrees to take action against them and gathers the strength to do this. For this to happen, Kabul would want Islamabad to either bring the Afghan Taliban leadership based in Pakistan to the negotiating table or initiate action against those refusing to join the peace talks.

Lately, there have been encouraging signs with regard to the fragile peace process as the Quadrilateral Coordination Group comprising Afghanistan, Pakistan, China and the US is hoping to facilitate talks between the Afghan government and the Taliban in the first week of March in Islamabad. Much will depend on the outcome of the efforts to move forward the uncertain peace process. The failure of these efforts would prompt the Taliban to launch their annual spring offensive and the resultant increase in bloodshed would not only reduce chances of restoration of peace but also widen the distrust between Afghanistan and Pakistan. The tit-for-tat policy being pursued by Kabul and Islamabad, the spoiler’s role played by India and the unclear US stance in the region certainly don’t augur well for restoration of peace in Afghanistan and, by extension, in Pakistan.