Ghulam Rasool Kalmati, popularly known as Mulla Kalmati, an author and Balochi language poet, serves as the custodian of the treasure trove of Balochi literature in Karachi: the Syed Hashmi Reference Library in Malir. He has authored an Urdu book Karachi: Qadamat, Waqiyaat, Riwayaat (Karachi: Past, Events and Traditions) and has penned a detailed account of the scattered settlements of Baloch tribes — most of them fishermen — on the coastal belt of Sindh and Balochistan and the drovers living on the banks of the Lyari river. Some of these settlements, established hundreds of years ago, were located in territories which constitute present-day Karachi. But while the jetties built along the coastal areas were used for trade purposes for centuries, until the British Raj, a developed town was never established there.

Kalmati says, “The reason these settlements were never developed into a proper city before the Raj was because they were seen as having few economic incentives for the Sindhi and Baloch ruling clans of the area, whose interests remained in keeping a check over the local tribal chieftains and the collection of various taxes from the locals through officials appointed there.

When the British took over, they developed the coast and jetties in the area and created a port fashioned to their strategic requirements. Military units were deployed there as there was always a fear of invasion from French and Portuguese forces, and the newly-built town was named Kurrachee, after one of the settlements there. This later became Karachi. Kalmati provides different accounts of the origins of the name which has been cited in works of history dating from the conquest of Alexander until the arrival of the British.

Lyari was one of those early settlements on the bank of the Lyari canal which became an integral part of Karachi. Its name owed to the large expanse of trees covering the area, which had, along with residential quarters, spaces allocated for graveyards and cemeteries for different communities separated by boundary walls.

In the past, Lyari was a predominantly Baloch area, but with the development of the port and business and trade centres, people from other communities, traders and businessmen, as well as labourers from Sindh, Punjab and Khyber Pakhtunkhwa also settled here.

However, the Baloch remained the dominant group in the area, as the political turmoil in the Baloch-majority province of Iran and the oppression by the Shah of Iran forced people to migrate from there. For many of those migrating families, Lyari became their destination. The arrival of various strands of Baloch people thus resulted in Lyari being established as the most prominent urban centre for their social and political activities, leading to the promotion of the Balochi language and literature and the development of the Balochi script. For this reason it was named the ‘Harlem of Karachi’ by the writer and anthropologist, Dr. Feroz Ahmed, in his essay on the Sheedis of Baloch ethnicity. 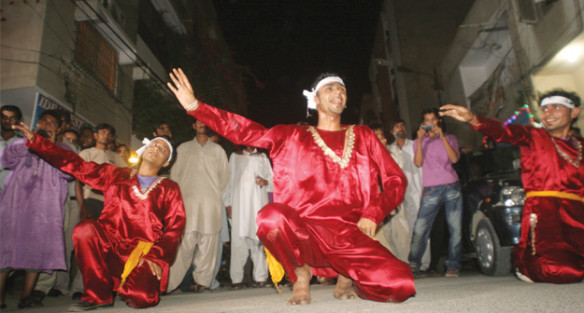 Dr. Feroz contends that the environment of Lyari was conducive to the growth of Balochi language and literature, the development of its script and the introduction of modern political ideas. He posits that it was that influence from Lyari which was extended to Balochistan and provided the ideological basis for the nationalist uprisings in that deeply divided tribal society.

In the 1930s, a political organisation, the Baloch League, was formed in Lyari by Waja Ghulam Muhammad Nooruddin, which acted as a platform for Baloch youth. Renowned Baloch leader Ghaus Baksh Bizenjo was among those who started his political career from there.

In the Ayub era, owing to the value of the land in Lyari, lying as it did in the neighbourhood of the old city’s business centres, a decision was made by the authorities to acquire Lyari land and a new development — KDA scheme 17 — was planned to relocate the settlers who had made their home there. In this process some families were forcefully removed. This led to a public outcry against the government and its allies from the Convention League, i.e. the Haroon family. It also paved the way for the emergence of other political parties: the National Awami Party (NAP), and the Awami League (AL) led by Hussain Shaheed Suhrawardy.

The issue of evacuation rendered a charged political environment, leading to the formation of an action committee, and protests and baton charges by the police echoing the army action in Balochistan. This time also saw the emergence of the NAP, with Attaullah Mengal, a popular face among Lyari youth. Finally, political pressure forced the authorities to reconsider the relocation plan and it was shelved.

It was not, however, entirely back to status quo. At that juncture the AL propped up Abdul Baqi Baloch, one of their supporters and a former lawmaker from the Makran region, who was a firebrand speaker. Baloch was asked by the AL to contest elections against Mahmoud Haroon, the ruling party candidate from Lyari.

In those days elections were not based on adult franchise. Candidates had to be voted in by the elected members of Basic Democracies (BD), Ayub Khan’s system of local bodies known as BD councils. The Haroon family had no popular support base, but thanks to their political manoeuvering skills and links with influential individuals, they were brought to the political forefront by the rulers of the day. 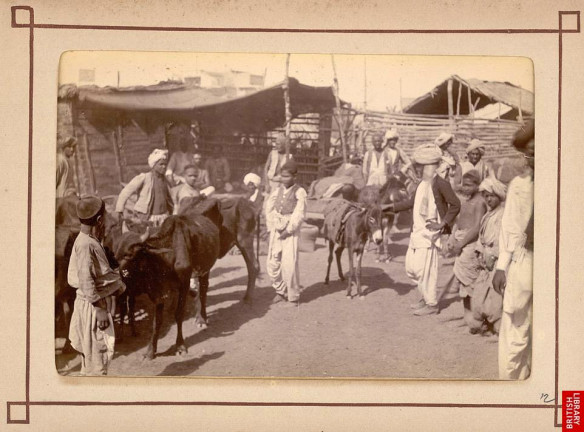 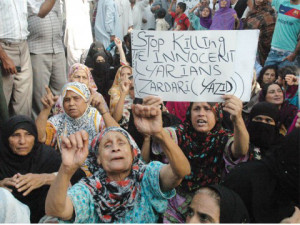 Mahmoud Haroon was successful in getting elected through their votes, while after his defeat in the elections, Abdul Baqi Baloch lost interest and gradually disappeared from the political scene.

“It was the hallmark of the politics of the Ayub era in Karachi, that whoever managed to control the people, regardless of the means he chose to do so, became a leader. Vandalism became an institution,” says a veteran political activist from those days. “It was Ayub Khan’s son who punished people from Liaquatabad for their support to Fatima Jinnah in the presidential elections, using hoodlums of Pashtun ethnicity to get the job done. This had a fallout in later years,” he adds.

Meanwhile, a fledgling student body named the Lyari Students Federation had joined hands with the left-leaning National Students Federation (NSF) during this time, and their activism had set the stage for the creation of the Pakistan People’s Party (PPP) and the emergence of its populist leader, Zulfikar Ali Bhutto, with many of the NSF members, who had started their careers in Lyari, by his side.

The emergence of the PPP and its popularity through the decades is a well-documented fact. With its bright, young, energetic leadership and an unarguably brilliant Bhutto at the helm, it changed the political scenario and ignited passions unseen before. The people believed the party was the herald of change and finally they could be masters of their own fate through the ballot.

But that too proved ephemeral. The forced exit of Zulfikar Ali Bhutto, and a brutal new dictatorship under Zia-ul-Haq, highly impacted the city. New political forces emerged, and violence became commonplace on Karachi’s streets. The new dynamics changed the city forever. But Lyari kept its romance with the PPP alive even during the darkest days of Zia’s rule, and in the ensuing elections, returned the PPP in its area to power with an overwhelming majority.

“When we were covering the 1988 elections, the whole city was buzzing with the arrival of Karachi’s new political player — the Mohajir Qaumi Movement (MQM). But when we visited Lyari, it portrayed a different picture. It was a heady atmosphere with loud music such as Dilan Teer Bijaa, a Balochi anthem of the PPP, reverberating in Lyari streets, accompanied by the traditional Sheedi trance dance,” reminisces Abbas Nasir, a senior journalist and former Dawn editor. 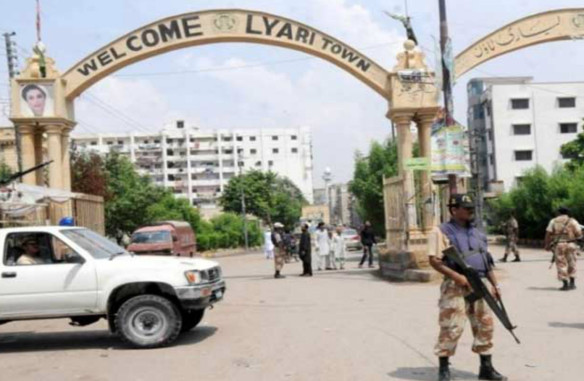 It was not to last. Slowly the passion for the PPP began to be eroded by discontent, as the PPP’s two stints in power did not even remotely address the woes of the people of Lyari. Enter the Nawaz Sharif-led Pakistan Muslim League and the MQM, who eagerly began trying to make inroads in the hitherto impenetrable PPP constituency.

The onset of the Musharraf era, and the introduction of the new administrative system of local bodies (LB) resulted in more changes, which deprived Lyari of some areas of commercial value. Under the new LB order, Hasan Lashkari village, Usmanabad, the Old Haji Camp and commercial and residential blocks around Lea Market — all sources of revenue for Lyari Town — were separated from Lyari and annexed by Saddar Town.

Meanwhile, the criminal gangs of Lyari started emerging once again, with the backing of the ruling party. The MQM for its part, lent its support to one of the PPP’s rival gangs, and the PPP’s local leadership resorted to backing another out of fear of losing the constituency in the upcoming 2002 elections. 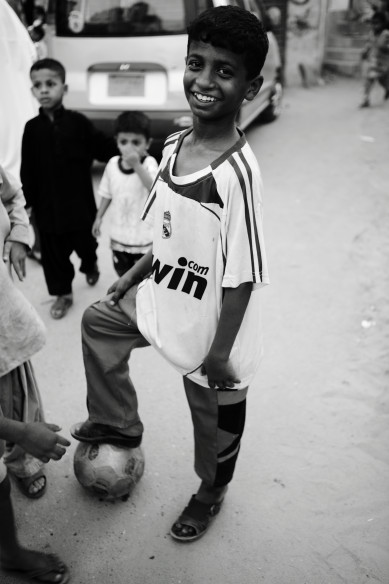 “For the PPP leadership this was a Faustian bargain. The MQM meanwhile, had little to lose if the violence between the warring gangs of Arshad Pappu and Rehman Dacoit continued,” disclosed a veteran PPP activist.

When the PPP leadership returned from exile in 2007, the political environment got a new fillip and the frenzy could be felt in the air. But what was disappointing for the people of Lyari, was the presence of some PPP leaders who had, in the Musharraf era, turned Lyari into a hell for the residents, with 800 people having lost their lives in those years.

Politics in Lyari were back to square one — it was the bad old ’60s once again. Characters from Mansoor Usmani’s popular poem of that time Ye waja waderay, Ye ghunday looteray were centrestage once again and gang warfare became the order of the day.

Today, many longtime residents have fled Lyari for safer havens and it remains a deeply divided area, with assorted criminal gangs holding sway in various areas and the residents of the area held hostage to their violence and barbarism.