The army chief, General Ashfaq Pervaiz Kayani, recently invited a team of journalists for a briefing, ostensibly to dispel rumours about the military standing in the way of the next elections. But alongside, he took the opportunity to seriously question the capacity of the politicians to handle affairs of the state, particularly their inability to resettle Swat after the army operation, the Hazara killings in Balochistan and the issue of terrorism in the country. The general also took a dig at the Chief Election Commissioner, Fakhruddin G. Ibrahim for failing to recognise the COAS after a two-hour-long meeting with him. The incident was clearly intended as a comment on the mental capacity of the CEC.

The meeting generated a lot of excitement. Some prominent journalists immediately eulogised the military commander’s sincerity in letting democracy thrive in the country. How serious the general is about democracy, however, remains to be seen. What this dialogue portends for the future of politics and the security of Pakistanis is a moot point.

If it were another country, the meeting would not even have taken place, let alone been reported on. One would like to remind the good general that in decent states, people usually do not remember the face or even the name of the army chief. And more importantly, the army chief calling journalists for a private, ‘chamber orchestra’ kind of meeting is a fairly sinister tool for intervention in politics. This is one of the many methods for derailing the democratic process. It started with General Musharraf, who was extremely fond of talking and would very often invite journalists and academics to “enlighten” them with his perspective on various national issues. General Kayani operates differently. He invites journalists and, reportedly, he sits there strategically dropping pearls of wisdom to set the tone for a debate. He launches an idea and then goes quiet. The moments of silence are filled allegedly by some of the “planted” minions in the meetings who then give interpretations of what they believe are Kayani’s thoughts. He offers no comments; he only runs rings of cigarette smoke around his captive audience.

Interestingly, he is not the only one who meets with journalists. The ISPR and the ISI have always had their own lines of communication with the media. This is not to trade any secrets, but to create a certain discourse that helps boost the army’s image vis-Ã -vis the politicians.’

A popular topic these days, for instance, is the lack of capacity and credibility of politicians. Our youth is growing up with the firm belief that all politicians are bad. While promising to support democracy, General Kayani was doing exactly what ISI pays some people to do — create doubts in the minds of ordinary citizens regarding the efficacy of democracy as a system. He spent the bulk of his time criticising politicians for not doing enough in Balochistan and Swat, despite the army creating space for further political and economic development. These views echoed those of another general, the former DG ISPR, Major General (retd) Athar Abbas, who in a recent TV programme spoke about how the army had launched an operation in Swat against the will of the ANP. As far as terrorism or the War on Terror is concerned, the Pakistani politicians find themselves in a ‘damned if I do and damned if I don’t’ kind of a situation. The War on Terror was never the politicians’ project, so pinning the blame of signing the peace accord with Sufi Muhammad of TSNM in Swat on the ANP’s shoulders alone is hardly fair. In fact, some members of the party had complained about hidden pressures on them to sign the accord. In fact, speaking to some senior army generals later, one got the distinct sense that the army may not have opposed the idea of imposing the TNSM brand of Sharia in Swat, a territory tucked away up north. The claim that it was politicians who opposed the military operation does not hold any water. 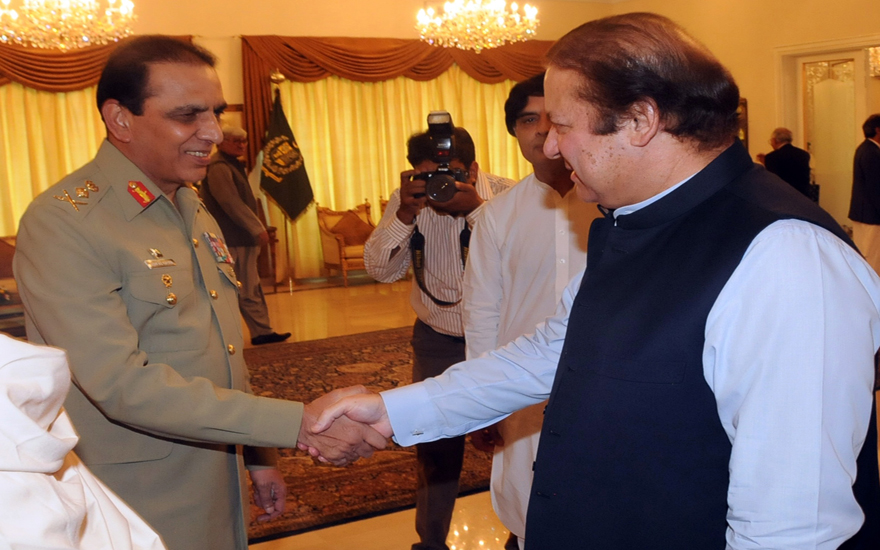 Appearances can be deceptive: The general with Nawaz Sharif

A couple of years ago, the army organised an anti-radicalism seminar in Swat that was addressed by then Prime Minister Yusuf Raza Gillani and the army chief, Ashfaq Pervaiz Kayani. The impression given was that it was the military’s initiative, when it was actually paid for entirely by the provincial government. Although there can be no excuse for the inertia and laziness of political decision-makers in framing an independent development agenda after the military operation, the fact is that a weak democratic set-up treads with nimble feet in areas and on issues in which the armed forces have greater control.

As for Balochistan, a question worth asking the general is, when did the politicians actually have space to manoeuvre in that province, especially after the military got engaged in it during the mid-2000s? Withdrawing the army does not mean the ISI has ceased operations in Balochistan. It can achieve the same objectives through other means in an insurgency-ridden territory.

Private meetings of the COAS with journalists are indicative of the fact that an army chief in Pakistan is never in the mood to take a backseat and create space for the democratic process. Read the text between his lines: Kayani seems to be saying that the politicians are so inept that they cannot be given control of national security, policy-making or other critical issues. And that the generals are the ones with the vision and sagacity to run the country. This clearly amounts to intervention and setting the tone of future politics. What these briefings do is create doubts in the minds of people, who would then, at some future date and time, be more accepting of military rule in the country.

Notwithstanding the problems with the present democratic setup, it is also true that a lot of damage is wrought by such propaganda. There is no denying that the current PPP government and its functionaries have engaged in corruption, but by focusing the entire debate one just party and one individual, one is strengthening the general perception that democracy is a bane for the country, and additionally raising doubts about whether the democratic process should be allowed to continue.

One cannot also rule out the possibility of General Kayani using this meeting to pitch the case for his extension, even though it may only be for a year. There are commentators out there who argue that Kayani is not interested in an extension. However, given that he continues to do such aggressive public relationing, one may be forgiven for assuming that he is serious about the extension. After all, if a general allegedly supports the democratic process, ensures holding elections on time and helps the US in sorting out a deal with the Taliban to aid troop withdrawal in 2014, he may be worth an extension. Sources close to the military argue that this idea may not take off as many generals are vying for the position of next COAS.

Kayani or not, one thing is blatantly clear: whoever occupies that post is not likely to bring a drastic change in the army’s basic attitude towards democracy or civilian control. It is worth reiterating that the military takes over every time it is threatened directly and personally. The organisation is happy to remain in the backseat so long as its interests are secured. The minute the military commanders and even junior officers feel that the civilians are trying to poach on their territory, the mood changes and they step out of the barracks and into the streets. For those who believe that the time for military interventions is over, it is worth reminding them that one had felt the same way during the 1990s — and then Musharraf struck and ousted Nawaz Sharif.

More importantly, a democratic transition does not mean the army is ready to surrender its control over security and foreign policies. Afghanistan (by extension Iran as well), India, the US and China are critical to the GHQ’s interests. These are non-negotiable areas as far as ceding control of them to political decision-makers is concerned. The Afghan policy, in particular, is tied up with other issues such as the Taliban and other militant groups in Pakistan, which will also be dealt with by the armed forces. The next army chief, like Kayani and his predecessor, will inevitably just want politicians to concentrate on good governance, which at times, is not possible without having control over strategic issues. The lines of control are clearly not clear and the fear of another military intervention will hang over the politicians’ head like the proverbial sword of Damocles.