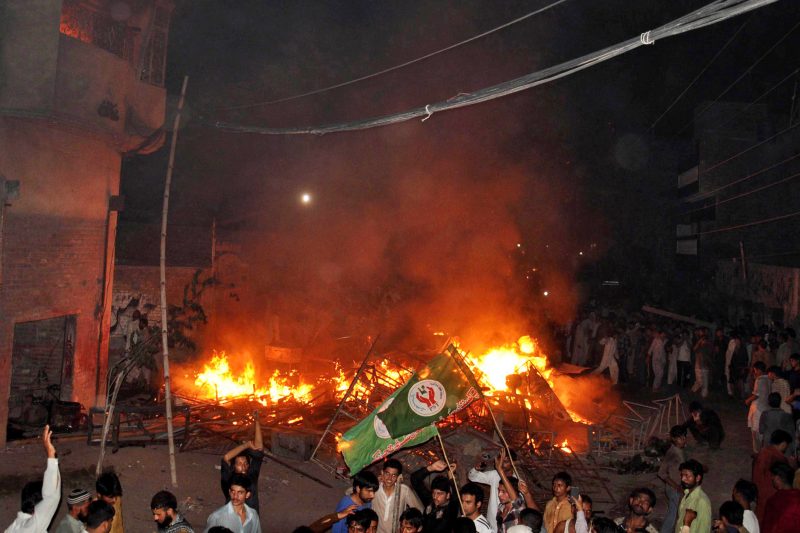 The white strip in the national flag remains constant but it is no longer an acknowledgement of the presence of non-Muslims in Pakistan. Shrinking numbers. Shrinking space. Shrinking visibility. And, above all, shrinking rights. This, in a nutshell, is the status of religious minorities in Pakistan.

At the time of Independence, Pakistan’s religious minority constituted over 20 per cent of the population. Even allowing for the separation of East Pakistan in 1971, where most of the Hindus were settled, the decrease in numbers is alarming. The 1998 census reported the decline to be a little over 3 per cent. While the recent census data has not yet been made public, it is expected that the proportion of religious minorities will show a further decline. It should be noted that official figures have been disputed by members of minority communities, who believe they are deliberately under-counted during census. 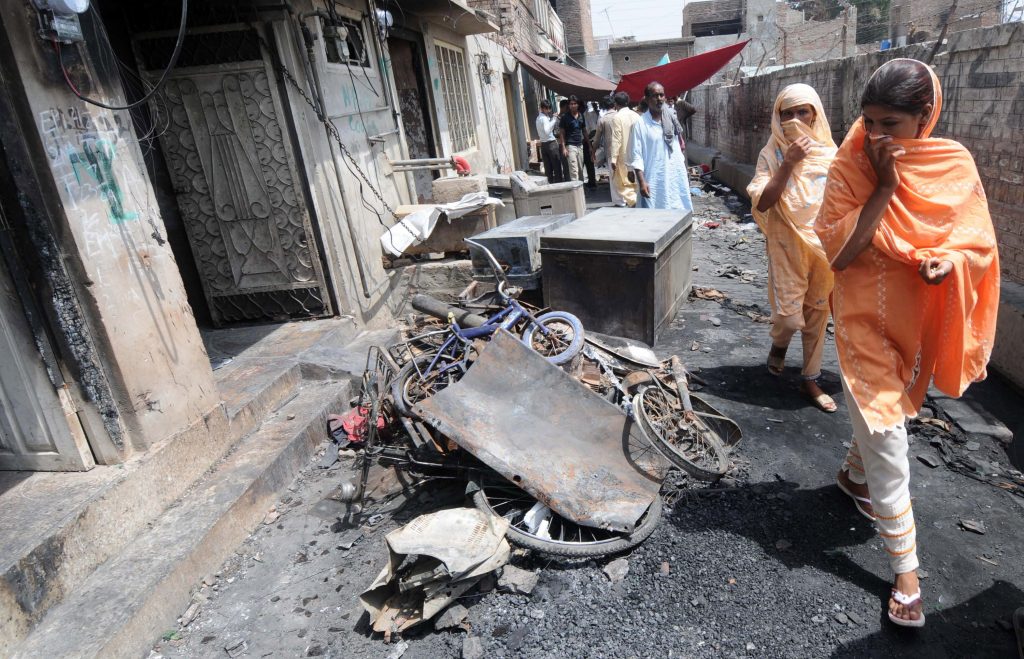 Pakistani Christian women walk beside a burnt out a house.

Migration is believed to be the major reason for the diminishing numbers. However, behind this exodus lies a narrative of persecution and discrimination. Liberals and minority groups continue to cling to the Quaid-i-Azam’s address to the country’s first Constituent Assembly on August 11, 1947, where he assured non-Muslims of freedom of worship in the new state of Pakistan, a state whose business would have nothing to do with religion.

The shift towards an exclusive Islamic identity began soon after Independence. The Islamic nature of the state was determined by the Objectives Resolution, a preamble to the Constitution of 1956. Again, in another of history’s ironies, when a Hindu member of parliament from East Pakistan expressed his reservations on the Objectives Resolution, it was Zafarullah Khan, an Ahmadi, who rose to defend it. Little did he realise that, decades later, the professed Islamic identity for the state of Pakistan would ultimately lead to his own community being declared non-Muslims through a constitutional amendment in 1974.

The religious parties, led by the Jamaat-e-Islami, began to demand the imposition of Sharia as a logical development for a state that had come into being on the basis of Islam. The other demand, suppressed at the time, was to declare Ahmadis ‘non-Muslims’. It is important to note that while the government of the day cracked down heavily on the Jamaat-e-Islami, imposing curfew in Lahore, and passing the death sentence on its leader, Maulana Maudoodi, today the persecution of Ahmadis goes unchecked and ostensibly has the support of the administration.

From targeting their congregations to attacking their graveyards, the Ahmadis have seen the worst face of intolerance in Pakistan. Among the most serious attacks was in May 2010, when Ahmadi mosques in Garhi Shahu and in Model Town, Lahore, were targeted killing 86 people and injuring over 120. In another condemnable incident, over 100 Ahmadi graves were desecrated in Lahore in December 2012. In July 2015, four members of the Ahmadi community were killed in Gujranwala when their home was attacked by a mob on the pretext of a member having committed blasphemy.

While all rulers of Pakistan played the religion card for purposes of expediency, it was General Zia-ul-Haq who institutionalised discrimination and opened the doors to persecution of non-Muslims. Apart from making amendments to ensure severe punishment for Ahmadis calling themselves Muslims, the additions and amendments he introduced to laws pertaining to blasphemy suddenly led to a sharp spike in alleged incidents of blasphemy, both in the number of cases registered as well as vigilante justice. It should be noted that while no one (in spite of the death penalty) has been executed after being convicted of blasphemy, over 65 people have been killed — either by enraged mobs or individuals (including policemen) in prisons. 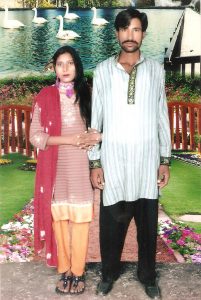 A Christian couple who were killed by a Muslim mob in Kot Radha Kishan.

The first case to come to public attention was that of Naimat Ahmar in 1992, a 45-year-old Christian school teacher in Faisalabad who was stabbed to death by a student. According to subsequent reports, he was targeted for refusing to be transferred to another town; his position in the government school was desired by a Muslim teacher. Following wall chalking accusing Ahmar of blasphemy, a 20-year-old student, Farooq, killed him.

Since then the toll has risen. Manzoor Masih, accused of blasphemy, was killed at a bus stop in Lahore in April 1994. Samuel Masih was killed by a policeman assigned to guard him in hospital in 2003. In April 2008, a factory worker in Karachi, Jagdish Kumar, was lynched to death by fellow workers. For the record, many Muslims have also been subjected to mob justice, including Mashal Khan, a Mardan student in April this year.

Shantinagar in 1997, Gojra in 2009, and Joseph Colony (Lahore) and Francis Colony (Gujranwala) in 2013 are examples where crowds have been instigated to attack entire neighbourhoods of Christians allegedly by property grabbers. In all these cases, no one was convicted. The course of ‘justice’ in each case reveals the painful reality that non-Muslims cannot place hope in either the administrative or legal system. In the case of Joseph Colony, those arrested for destroying over 160 Christian homes were quickly released on bail with no further progress reported on their trial. The sole Christian charged, Sawan Masih, whose alleged blasphemy had been used to instigate mobs, was given the death sentence in a rare display of speedy justice.

Another horrific incident took place on November 4, 2014, when a young couple, Shama and Sajjad, were lynched by a mob in Kot Radha Krishan, Punjab. They were beaten to death and then burned by an angry mob that heard announcements from mosques that they had desecrated a copy of the Holy Quran. They were working as bonded labourers at a brick kiln and this is where they met their violent death.

Asia Bibi, a Christian woman, was convicted for making blasphemous remarks over seven years ago. Her death sentence was upheld by the Lahore High Court. She filed an appeal in the Supreme Court; however, when her case finally came up for hearing, a judge recused himself and the case was adjourned indefinitely. 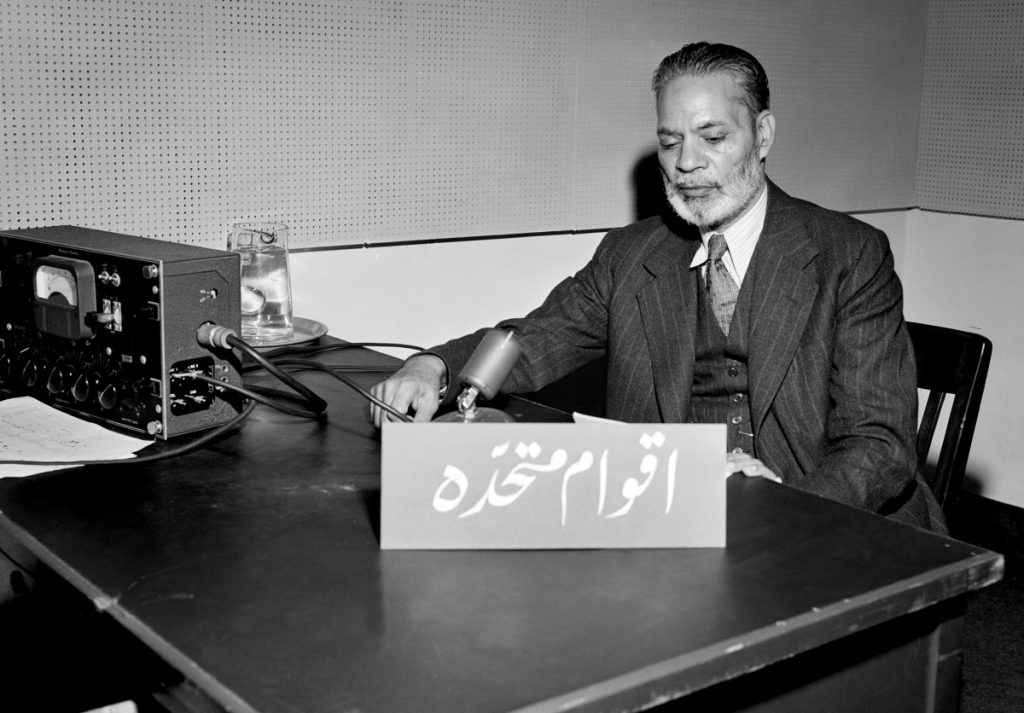 Hindus, concentrated mostly in Sindh, carry the burden of historical prejudice as well as association with India. According to their representatives, the greatest issue of concern to the community is that of forced conversions, the majority of these being young women. In most cases the girls, many of whom are minors, are abducted, forcibly converted to Islam and then married to Muslim men. The Sindh Assembly’s bill to check forced conversions, passed last year, was put on the back-burner after protests by religious parties. Several politico-religious figures in Sindh have taken it upon themselves to convert Hindus and, though one leader openly bragged in parliament about his conversion activities, no action was taken against him. 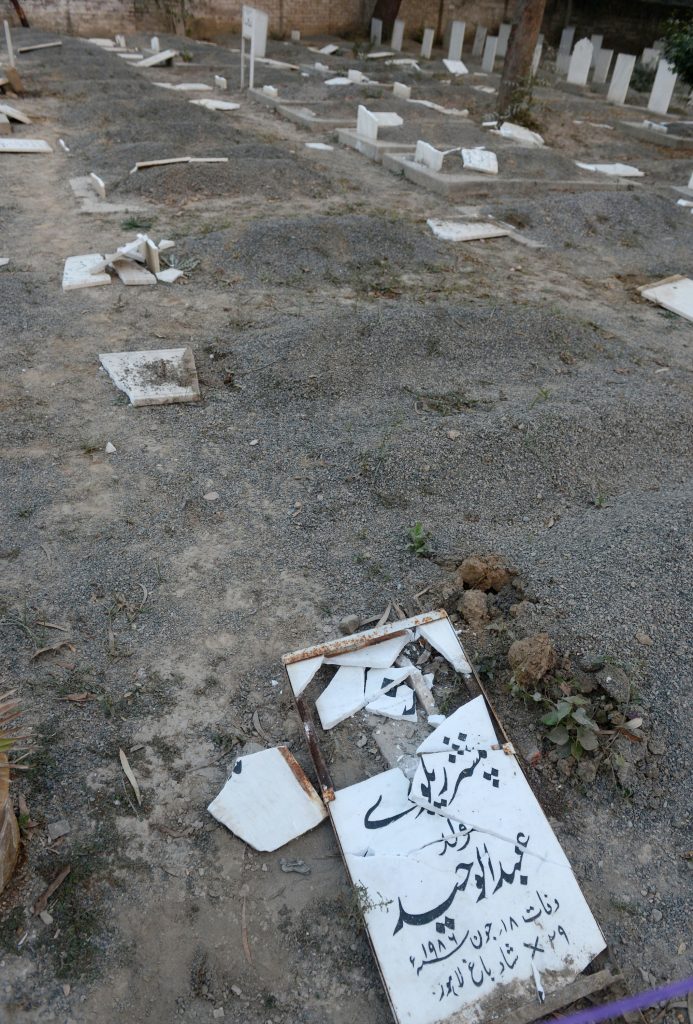 Recently, the Indian government has announced its willingness to accept those suffering from religious persecution in neighbouring countries. The migration of Hindus to India may soon turn into an exodus if they continue to be treated as unequal citizens.

The Sikhs have been somewhat better treated by official quarters — perhaps to demonstrate to India that Pakistan is willing to embrace a religious minority that has not been treated too well across the border.

A few years ago, the Supreme Court directed the government to take steps to ensure the rights of minorities and protection of their places of worship. Apart from tokenism such as the Prime Minister celebrating Diwali with the Hindu community, the minorities have seen little serious commitment from the government.

(The data used in this article is from various reports of the Human Rights Commission of Pakistan).