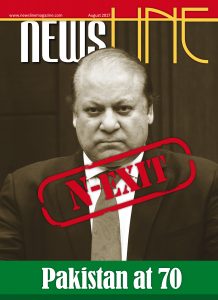 It’s not over, till it is finally over. Those who were hoping to hear the last word on Panamagate on July 28 and put it to rest forever, were in for yet another disappointment. The verdict has opened up a can of worms, as all shades of opinion continue to sound off on the judgement, mostly with scepticism.

The major point of contention is the articles under which Prime Minister Nawaz Sharif was dismissed: Articles 62 and 63, which were added to the Constitution as amendments by Sharif’s benefactor, General Zia-ul-Haq.

In an ironic twist of fate, Sharif, who had refused to remove the two controversial articles, despite the PPP pleas when they were moving the 18th Amendment, is its latest victim. And he will probably not be the last. A clear and present danger exists that more heads will roll for failing to meet Gen Zia’s criteria of sadiq and ameen. But the former PM is not unduly concerned. Why, he may want to see his “sworn enemy” Imran Khan go down with him under the same clauses.

His only expression for now is one of relief — for not being shown the door on corruption charges. But the Sharif family’s troubles are far from over. A NAB court will soon begin hearings on the references filed against the Sharif family on assorted charges, from failing to provide the money trail for the London properties, to perjury, to forging documents, to intimidating state institutions, to falsifying documents, and so forth. If these charges were indeed proven to be true, the Panamagate inquiry should serve as a good case study on how governments circumvent, subvert, corrupt and beat the system.

When the Supreme Court set the accountability process in motion, there were howls of protest. The exercise was seen as a conspiracy against Nawaz by the Jewish lobby/the Americans/the Arabs — for the nuclear blasts/CPEC/failure to send troops to Yemen. Worse, it was seen as a threat to derail democracy. Why should accountability pose a threat to democracy? Seventy years down the road of Independence, Pakistan’s parliamentarians seem to have forgotten the classic definition of democracy — the rule of the people, by the people, for the people. Unfortunately, the power-brokers and power-wielders of this country have conducted themselves abysmally. The recurring themes of 2017 have been corruption and misgovernance. And yet accountability is equated with conspiracy, and seen as a threat to democracy.

It’s time the rulers of this country were held accountable for their sins of omission and commission.

With them, it’s only been about winning an election — and raking in the moolah. The next general elections are 10 months away, but the game of thrones has already begun.