Kamila Shamsie is a Pakistani author of six novels, including Burnt Shadows, which was shortlisted for the Orange Prize for Fiction. Her seventh novel, Home Fire, which has been longlisted for the Man Booker Prize for 2017 will be released on August 15, 2017. 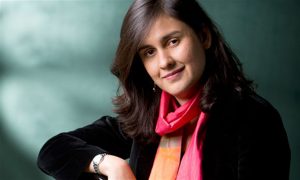 In Pakistan, and among Pakistanis around the world, the words ‘Pakistan’ and ‘Western press’ can seldom be found together in a sentence without the word ‘misrepresentation’ linking them. As a novelist, I often find fellow Pakistanis asking me what my novels do to correct this misrepresentation, as though a novelist’s task is not to do their own work but to chase after Western journalists with an editing pen, adding footnotes here, deleting sentences there. But equally, as a novelist I often find myself answering questions about Pakistan — by non-Pakistanis — that reveal the way Pakistan looks to those who’ve never looked directly at it, and only know what they read in the newspapers. And then I share the irritation, even anger, at the way Pakistan is viewed — this complex, contradictory, rich and varied nation is reduced to violence, persecution of minorities, see-sawing democracy, blasphemy laws and misogyny. Even when the stories seem to veer away, they move towards such things as fashion shows and literary festivals which, if the world’s press is to be believed, draw their value from ‘defying’ terrorism by the mere fact of existing. In other words, nothing can be viewed on its own terms; everything has to be seen in the context of a failed state, the world’s most dangerous country etc.

That, in fact, is the problem: the pervasiveness of a single lens through which the country’s myriad stories must be viewed. But if we are to be honest, it would be a misrepresentation to talk about international news stories about Pakistan as misrepresentations. The violence, the persecution of minorities, see-sawing democracy, blasphemy laws and misogyny are all too real, all too prevalent. There is, also, the nature of the news itself. A bomb blast is a news story. A Pakistani family treating visitors with great hospitality is not. I mention this particularly because when foreign visitors to Pakistan are asked their impressions of the country, this is always among the first things they mention. The hospitality. But it is not the fault of journalists that this hospitality does not make headline news in papers around the world; it’s merely the nature of headline news.

Let me say something that not everyone would like to hear: it is all absolutely true, even the worst things that are written about us. Pakistan is a nation with many reasons to feel a sense of shame. And for a nation that lets down the most vulnerable of its citizens, time and time again, it’s simply absurd to say that this is something that no outsider should be allowed to mention, and no Pakistani should mention it beyond the borders of Pakistan. We appear self-defensive, paranoid and insecure when we try to stifle conversations about our failings.

Sometimes, of course, the misrepresentation is really a misrepresentation. Facts are mangled, half-truths are told, something small is magnified into something large. All professions include those who do their jobs well and those who don’t, and journalism is no exception. While there are those international correspondents who have been very biased in their coverage of Pakistan, there are many others whose reports on Pakistan have been very nuanced and thoughtful. Among them, names of Declan Walsh, Lyse Doucet, Owen-Bennett Jones immediately spring to mind. Would we ask them not to report on Aasia Bibi? Not to cover the horrors of civilian deaths from a myriad of causes? Not to discuss civil-military relations in the country? As it becomes more and more dangerous for local journalists to cover certain ‘sensitive’ topics in Pakistan, the burden falls increasingly on foreign journalists to keep those stories alive, or else those who want those stories hidden from public view would win entirely, and the victims (or surviving relatives of the victims) would find themselves alone, screaming into the void. If anything, the times we live in places an even greater burden on international journalists to uncover certain distressing stories about Pakistan.

Yes, that’s right. I’ve just asked for more articles to shine a light on some of the darkest corners of Pakistan. However, to talk about the reach of an article in terms of a ‘foreign audience’ alone, ignores the fact that in an increasingly connected world, the audience for foreign news stories is also locally based. There are things about ourselves we might get to hear only if they’re relayed from the outside. It’s been this way for much of Pakistan’s history — certainly when I was growing up, the BBC World Service was a way to hear news about Pakistan that didn’t make its way to Khabarnama, PTV’s news broadcast. 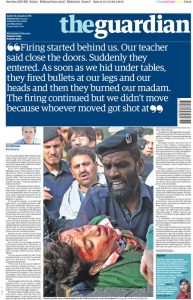 A nation of 180 million people reduced to stories of ‘victim’ and ‘perpetrator’ is a grotesque situation. Yes, something does need to be done to broaden the world’s image of Pakistan. But why do we look to the journalists to do that? Think, for a moment, of the news stories about America that have been reported around the world this year — they’re almost entirely about the awfulness of Donald Trump and his team, and the Republican Party that continues to back him. The coverage about all the protests against Trump have faded away, even though those in America will tell you that anti-Trump resistance is still a powerful and a daily occurrence. But the protests aren’t new anymore, and they aren’t news anymore. Even so, the misrepresentation of America is not a subject I expect to find most Americans too exercised about. And it’s for this basic reason: America does not rely on the world’s journalists to represent it to the world.

Let’s think for a moment about Pakistan’s cricket team. Aren’t there reasons, other than cricketing ones, why it feels like such a relief when the team achieves something wonderful? When it does so, the words ‘inspirational’, ‘talented’, ‘brilliant’, ‘delightful’ become attached to Pakistan in the international press. The writing about Pakistan cricket is instructive because — despite the terrorist attacks on the Sri Lankan cricket team in Pakistan in 2009 — there is such a strong narrative to be written about our cricket team and so many cricket writers informed enough to write it, that the story doesn’t have to be filtered through the lens of terrorism.

Pakistan doesn’t need the world’s press to tell different news stories about it. It needs to be known in the world through something other than news stories. More books, more films, more comedians, more musicians, more cricketers (women and men), more world-class institutions, more museums, more archaeological digs, more progress in combating climate change, more tourism. All this will deepen and vary the way people think about Pakistan. But if anyone says, ‘why should all those other stories matter, if a nation persecutes its minorities, and the most vulnerable are undefended?’ Well, that isn’t a question to which I have a positive answer.