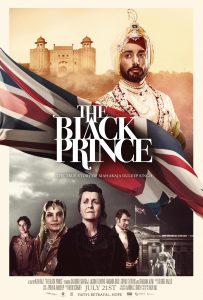 When Maharajah Duleep Singh of Punjab entered a ballroom in mid-nineteenth century Britain, murmuring heads would turn and longing glares would be cast. Always in the presence of Queen Victoria — of whom he was a favorite — the exotic ‘oriental’ prince was a prize fixture on the social circuit, and at royal gatherings. This in itself, along with its political, social and cultural implications, is enough to make for a riveting few scenes in a Hollywood film. Yet Kavi Raz’s The Black Prince fails to deliver. Its biggest crime is that it wastes an opportunity to effectively explore a theme that has yet to receive substantial coverage in western cinema: the identity of the Indian maharajah in British India.

Based on historical events, The Black Prince is the story of Duleep Singh, the last maharajah of Punjab and son of legendary Sikh ruler Ranjit Singh. Directed by Kavi Raz and produced by Los Angeles-based Brillstein Entertainment Partners, the low-budget production is more like a made-for-TV movie. This is fitting, since Brillstein Entertainment is prolific in TV productions, as opposed to big-screen features. And while Raz may be known as one of the first South Asians to be cast in a prominent role in a Hollywood TV series, this does not guarantee that he can direct quality films, as is apparent in his latest venture.

The tragedy of Duleep Singh is a classic example of the harsh treatment meted out to those who dared to challenge the supremacy of the Raj. In 1849, 10 years after the death of Maharajah Ranjit Singh, Punjab was annexed by the British Empire. Young Duleep was removed from his throne, forcibly separated from his mother and raised in British hands so as to extinguish in him any potential threat. As he came of age and grew increasingly aware of his Sikh heritage, he resented the Empire’s unjust treatment of his family. Gradually, Duleep embraced the struggle to reclaim his kingdom and identity — a quest that drove him underground.

Real-life events of such a nature present filmmakers with an opportunity to tell a story that departs from the conventional revenge fantasy or the standard happy ending that rouses in the audience a fixed set of emotions. This is a story best told with a sense of realism and existential irony. That the king’s lifelong struggle fades away into the humdrum of colonial life, despite hope constantly being visible on the horizon, is in itself unpredictable and dramatic.

Instead, Raz resorts to melodrama of the kind found in South Asian soap operas and Bollywood productions, attempting to rouse in the audience a cheap emotional fervour of Sikh nationalism. Moments that could have been memorable, such as the opening sequence, or time when Duleep confronts Queen Victoria, or his interaction with the underground resistance in Paris, or his return to India, are instead found lacking, leaving the audience dissatisfied. Similarly, a ballroom scene at the start of the film is robbed of its potential due to poor direction and set design. While the obstacle of a low budget can be overcome by skillful direction, this is too much to ask for in this film. The physical get-up of the aged and bald Duleep Singh conjures up memories of Klingons from Star Trek.

While Shabana Azmi demonstrates her talents in a witty depiction of Duleep’s mother, Maharani Jind Kaur, she too falls hostage to the director’s lack of vision and insight.

The imagination plays a central role in the appreciation of history, and history lovers in particular will be disappointed with the film, since it is nowhere near the rich sequence of images that play out in their minds in reference to various events of the past. One hopes that there will be more Hollywood depictions of the subcontinent in the future, by better directors.