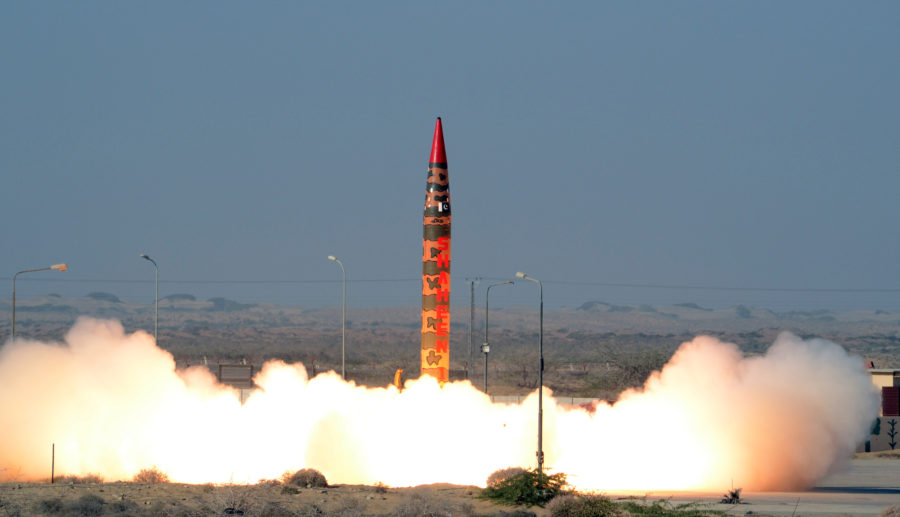 On May 28, Pakistan celebrated Youm-e-Takbir amidst longstanding ambitions of joining the Nuclear Suppliers Group (NSG) which had come under jeapordy after the US imposed sanctions on seven Pakistani companies over suspected links to nuclear trade.

Pakistan’s nuclear programme has been the topic of discussion every time the US has expressed its reservations regarding militant groups functioning in the country, accusing Islamabad of harbouring them like strategic assets. With the next NSG meeting in Geneva scheduled this month, the US — which singlehandedly took up the case against Pakistan in February’s Financial Action Task Force (FATF) meeting in Paris — is unlikely to give Islamabad any leverage in its membership bid.

Officials of the sanctioned companies confirm that they have been penalised over dual-use items — ones that can be used either commercially, or as weapons. It is through undercover traders that Pakistan managed to acquire nuclear technology, as A. Q. Khan managed to squeeze home centrifuge designs from the West to make Pakistan the nuclear power that it is today.

While Pakistan has over a hundred nuclear weapons, the power shortfall touched 7,000MW last month, raising questions about whether the country is wasting its nuclear energy potential. “No country has the legitimate right to possess nuclear weapons, but every country that does so eventually gets accepted — after initial condemnations,” says nuclear scientist and political analyst, Pervez Hoodbhoy. “While India and Pakistan do not belong to the group of five nuclear-weapon states specified in the Non-Proliferation Treaty (NPT), for most practical purposes they are treated as such.”

Physicist and nuclear activist, Abdul Hameed Nayyar, maintains that despite US concerns over weapons getting into the wrong hands, the legitimacy of Pakistan’s nuclear programme is not being challenged. “Perhaps, it is in some Indian quarters,” he says, “but those are inconsequential. So Pakistan’s nuclear status is already established,” he continues. “In fact, it is a strange characteristic of the nuclear club that once a country succeeds in gatecrashing, it is accepted sooner or later. The effort is usually spent in preventing a gatecrash.”

This means that Pakistan has its work cut out in getting a NSG membership, for which both Hoodbhoy and Nayyar maintain, Islamabad would have to rely on Beijing.

“Pakistan’s sole effort is now concentrated in using China to curb India’s pursuit of the NSG, knowing full well that once India becomes a member, Pakistan would never be allowed in,” says Nayyar. “Pakistan’s own membership would desperately depend on compromises made in allowing Indian membership.”

Hoodbhoy doesn’t think Pakistan can do much in its bid for the NSG. “More assurances are unlikely to work. The final outcome will depend on the extent of China’s support and its calculation of how much it would like to annoy India.”

Analysts, however, believe that Pakistan would still need to convince the US if it wants NSG membership. “What keeps Pakistan out of the NSG is America’s veto,” says Michael Kugelman, senior associate for South Asia at the Woodrow Wilson International Center for Scholars in Washington. “There are very strong, entrenched concerns in Washington about Pakistan’s proliferation record, and those concerns are likely to keep the Pakistanis on the outside looking in.” And while the US has repeatedly raised question marks over Pakistan’s nuclear proliferation and its support for jihadist groups, these allegations have increased multiple times under the Trump regime, beginning with the US president announcing his South Asia policy in August last year, where he called out Islamabad for “providing safe havens to terrorists.”

President Trump’s speeches reflect the widespread belief within the policy community in the US, that Pakistan has been playing with fire for many decades and that it needs to change its policies regarding terrorism. Hillary Clinton in 2010 had remarked, that “you cannot keep snakes in your backyard and expect them to only bite your neighbours.”

With the Trump regime pulling out of the 2015 nuclear deal with Iran, there are concerns that it might be hard on Pakistan’s nuclear programme as well. However, neither Hoodbhoy nor Nayyar see direct implications for Islamabad. “There’s [no impact] that I can see, apart from more caches of banned export items being seized in the US,” says Hoodbhoy. “Nuclear warhead production in Pakistan entered into a kind of industrial mode decades ago. I doubt that the US has the ability to affect it in any significant way.”

According to Nayyar, Pakistan’s nuclear programme has prospered in spite of harsh US sanctions. “There are global interests like, say, China’s, which continue to defy sanctions for their own national interests, increasingly making unilateral American actions less effective. In fact, the whimsical actions of the American right-wing may lead to a remote possibility of the formation of a block that finds itself compelled to resist its unilateral actions,” he says.

Pakistan plans to increase the contribution of nuclear energy from the present level of 1,300 MW to 8,800 MW by 2030 — a massive leap. Chinese defiance of NSG regulations and their power plants have increased Pakistan’s confidence.

“In its haste to not forego this opportunity, the Pakistani nuclear establishment is not adhering to all the internationally recommended safety precautions,” says Nayyar. “For example, the world has learnt from recent experiences that nuclear power plants, however safe, must not be put within 30 kilometres of major population centres. But the ones in Karachi are only 15 kilometres away,” he continues. “The new guidelines require evacuation plans and drills in nearby cities. Nothing of the kind is being done in Karachi. This is in spite of the fact that the Chinese reactor Pakistan is buying is a new model that has not even been tried in China. These things expose the Karachi population to grave dangers in case of an unforeseen nuclear accident.”

“Making nuclear weapons is fairly simple technology, but making nuclear reactors for energy production requires engineering expertise well beyond Pakistan’s capabilities,” he says. “Pakistan will have to rely on external providers, which pretty much means China, for the foreseeable future. As for safety, even the Chinese government is seriously worried about reactors being produced by private Chinese companies. Pakistan, however, does not allow considerations of nuclear safety to get in the way of its plan to have more Chinese reactors, even if they are based near or inside its cities.”