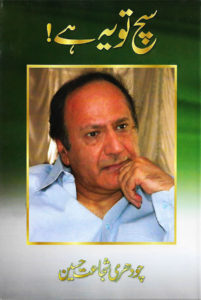 Chaudhry Shujaat Hussain is one of Pakistan’s frontline politicians, who remained on the right side of the “powers that be” through almost his entire political career spanning nearly five decades. As a young scion of a political family, he witnessed from close quarters, the major ups and downs of the country’s often traumatic history since the late 1960s. However, he started dabbling directly in politics from the early 1970s, under the tutelage of his father. He became a political player in his own right in 1983, when the then military ruler, General Zia-ul-Haq, nominated him to the Majlis-e-Shura — almost two years after the assassination of his father, Chaudhry Zahoor Elahi.

Hussain, who himself has remained mired in controversies and was often accused of wheeling and dealing during his long and eventful political career, has a huge number of stories to tell about the major turning points in our history, as well as offer insights into the good, the bad and the seamy side of Pakistan’s politics.

His recently-published memoirs, Succh Tu Yeh Hai (Truth Is This), include some carefully selected “facts” and give a glimpse of the intriguing world of the country’s politics in which kingmakers often lose control of their own creations. While the book provides some interesting background about the political players and the games they play, the reader is left craving for more detail, retrospection and analysis, which are unfortunately missing from this otherwise fairly readable book.

These appear to have been left out deliberately. In the foreword, the narrator writes that he has tried to present “the truth” without any exaggeration or ambiguity. But in this simple narration of “truth,” the author paints a one-sided and incomplete picture.

However, the book effectively highlights some important details about Nawaz Sharif’s advent and ascent in politics under the patronage of General Zia-ul-Haq and his close military aides. The writer also points out the important role the then Inter-Services Intelligence (ISI) Chief, General Hameed Gul, played at crucial make-or-break points of Sharif’s political career.

The book depicts Nawaz Sharif as a man who failed to honour the promises he made to his allies and hurt those who were good to him. Hussain also pinpoints Sharif’s inability to tolerate dissent, his utter disregard for institutions and his dictatorial mindset.

Chapter 7 of the book titled, ‘Nawaz Sharif’s repeated breaking of pledges,’ provides interesting details of the time his name was first floated for the Punjab Chief Minister’s post in 1985, and of how the military bigwigs requested Chaudhry Shujaat to ensure that his group of Punjab Assembly members supported this relatively new face from urban Punjab, who was a stranger to the landed political elite. In a show of gratitude, Sharif made promises, under oath, to take all decisions in consultation with his backers. But soon after he assumed power with the support of Chaudhry Shujaat and his group, Sharif started to undermine their leadership by buying out their provincial assembly members in a bid “to cut (them) down to size.”

The aforesaid chapter claims that Sharif’s negative attitude forced Hussain’s group to move a no-confidence motion against the chief minister in Parliament, but the then ISI Chief, Hameed Gul, stepped in and convinced General Zia-ul-Haq to help foil this attempt which, ironically, was undertaken with the military ruler’s blessings. This chapter also gives details of a meeting held at the residence of one Brigadier Qayyum, and also attended by General Jillani along with Nawaz and Shahbaz Sharif, in which the two rival factions of the party were asked to bury their differences and shake hands. The writer claims that the Sharif brothers tendered an apology and asked the Chaudhrys of Gujrat (as Hussain’s family is known in political circles) to forgive and forget.

But the writer says that the truce was violated by Nawaz Sharif yet again. This was the point, he claims, at which General Zia-ul-Haq intervened and sternly told Nawaz Sharif in a meeting to take back Pervaiz Elahi and his team in the cabinet.

In the chapters that follow, the author keeps giving examples of how Nawaz Sharif betrayed and ditched allies and party leaders, including then prime minister, Mohammed Khan Junejo, and managed to secure the support of the army to make it to the country’s top slot. While these details shed light on Nawaz Sharif’s nature and character, they also highlight the murky side of our politics and the manner in which political developments are orchestrated and the peoples’ mandate manipulated. The author, unintentionally, also reveals that he and his family remained loyal to the kingmakers despite being undermined by them many times, from the days of General Zia-ul Haq to those of General Pervez Musharraf.

However, it was under Musharraf’s rule that the Chaudhrys of Gujrat reached their zenith of power and glory. Pervaiz Elahi became Punjab Chief Minister, while the author himself led the ruling Pakistan Muslim League Quaid-e-Azam (PML-Q) faction and became caretaker prime minister after Zafarullah Jamali was shown the door by the military ruler.

The book throws light on Sharif’s second stint as prime minister and how he opened fronts against institutions, including the armed forces and the judiciary. The author writes that Nawaz Sharif was briefed twice about the Kargil Operation in advance — first on January 29, 1999 in Skardu, and then again on February 5, 1999 in Keil, AJK. There was another meeting in Lahore on March 12, 1999 about which General (R.) Abdul Majeed Malik told the author that Nawaz Sharif prayed for the success of the Kargil Operation at the end of a huddle of civil and military leaders. But when tensions with India escalated and Nawaz Sharif planned a trip to the United States, he expressed ignorance about the operation in front of the civil and military leadership, upon which General Musharraf took out a notebook and read out details of the briefings made to the prime minister on the issue.

In chapter 13 of the book, the author argues that if Sharif had not tried to sack the army chief and divert his aircraft, the army would not have overthrown the government in October 1999. This chapter reveals some interesting details about Shahbaz Sharif’s nervousness on the day his elder brother tried to remove Musharraf and get him arrested, but failed.

This chapter and the one following also tell readers about how, without taking his jail mates into confidence, Sharif suddenly struck a deal with the military and fled to Saudi Arabia from the Chaklala Air Base, in the dark of the night. Sharif had signed an agreement that he would not take part in politics for the next 10 years, which he showed to his lawyer, Ejaz Hussain Batalvi, in the Attock Jail, says the book.

A significant portion of the book also focuses on the PML-Q government and its “achievements” and “record of services” between 2002-07, including how the author got Mir Zafarullah Jamali elected as the prime minister, why Musharraf decided to remove him and how he was subsequently elevated to the post.

Hussain sounds bitter about the last days of Musharraf’s rule, especially the developments of the pre-2008 election days in which the military ruler struck a deal with Benazir Bhutto and passed the infamous National Reconciliation Ordinance (NRO), paving the way for her return to the country and giving a lease of political life to many others accused of corruption and wrongdoing. The author claims that the 2008 elections were manipulated to ensure that the PML-Q did not emerge as a major parliamentary force as it had already been decided to bring back the PPP to power. He also accuses the United States of playing a role in this arrangement.

The initial portion of the book is dedicated to Chaudhry Shujaat’s family history, its business ventures and details of his father, Chaudhry Zahoor Elahi’s, rivalry with Zulfikar Ali Bhutto in the 1970s.

All in all, Succh Tu Yeh Hai is an interesting study of how a traditional political family climbs the ropes of power by building the right connections, coopting the conservative and orthodox religio-political forces, and remaining on the right side of the establishment.

Chaudhry Shujaat’s memoirs may appear shallow and superficial because of the absence of details and analysis and, above all, his one-sided views, but for those interested in Pakistan’s politics, they do shed a light on what’s wrong with the country’s politics and its ruling elite. n