It’s been a long time coming, but now that it is here, Islamabad International Airport seems to have been worth the wait. The mega project that was conceived over a decade ago was finally inaugurated in May.

CPG Singapore were appointed design consultants for the airport and ARCOP Associates were their Joint Venture partners in Pakistan.

The modern structure with natural light streaming through walls of glass, spacious passages and dedicated departure gates could be anywhere in the world. And yet it houses a quintessential aspect of Pakistan: its arts and crafts.

Syed Yawar Abbas Gilani and Mahboob Khan, partners at ARCOP, travel widely. While designing the terminal building, they were struck by the way many international airports had become a repository of their nations’ artistic genius. They incorporated the artistic showcase into design plans for the terminal building at Islamabad International Airport.

Noorjehan Bilgrami was approached by ARCOP to take on the curator’s role for the art project. She came up with the idea of integrating Pakistani crafts into the project and drew upon her experience of the traditional crafts to identify master craftsmen from different regions of Pakistan. She says, “We looked at reaching those who excelled in the arts and crafts and placed the traditional and contemporary together under one roof, giving them equal space and respect.”

Bilgrami took on the challenge of using traditional methods, depending on the craftsman’s hand and eye alone, and taking them to a scale that has seldom been attempted for work of this nature. The aim was to achieve a high level of craftsmanship while staying true to the authentic design vocabulary of the craft. The work took over a year to complete and install, and the end result is quite spectacular.

The craftsmen utilised different mediums, including stone, metal and ceramic tiles, to produce eye-catching panels, 12’x24′ in size, as varied in treatment as they are true to their place of origin. The panels are placed at the departure gates, while the State Lounge has a resplendent wall of naqqashi (fresco). The wall was prepared on location by Ustad Rafaqat Ali and his team. Ustad Rafaqat has worked on the restoration of the Wazir Khan Mosque in Lahore and is well versed in the art form favoured by the Mughals.

In Multan, ceramist Sadia Salim worked with Ustad Mohammad Wajid, a sixth generation kashigar in Multan, to produce a 3,500 piece terracotta panel in hues of turquoise and blue. In Nassarpur, Ghulam Hyder Daudpota’s workshop produced a kashikari doorway inspired by the tile work at the tomb of Shah Rukn-e-Alam.

Engraving on schist or slate has been practiced for centuries in the Gangar mountain range, and was used to make elaborately carved gravestones that would endure the test of time, weathering wind and rain. Ustad Aurangzeb and his son, Mohammad Rustam, meticulously carved the huge schist panel for a gate lounge at International Departures.

A glowing, hand-beaten metal panel, engraved with floral patterns and arabesque, was produced by skilled metalworkers in the villlages of Khyber Pakhtunkhwa and assembled in Peshawar.

Truck art, a relatively recent addition to the realm of Pakistani craft, greets  passengers at Domestic and International Arrivals with all the cheer of chamakpatti, folk motifs and glowing colour. Munawar Ali, a member of Noorjehan’s curatorial team, put this segment together, working with well-known truck artists and artisans all the way from Karachi to Mingora.

Naazish Ataullah curated work by artists in Lahore. Imran Qureshi and Aisha Khalid were among the artists commissioned to produce work for the Airport Arts Project.  Imran’s painting, titled Pages of Perfection, is inspired by Surah Al-Qadar. Its layout is based on the unfolded pages of a manuscript and it is the largest work ever completed by the artist.

Aisha Khalid’s work, on a similar scale, employs Kufic calligraphy in gold to render verses selected from the Quran. Ali Kazim’s mural is inspired by the ruins of Harappa while Irfan Hakim sculpts a flock of the mythical ababeel to float above an atrium. 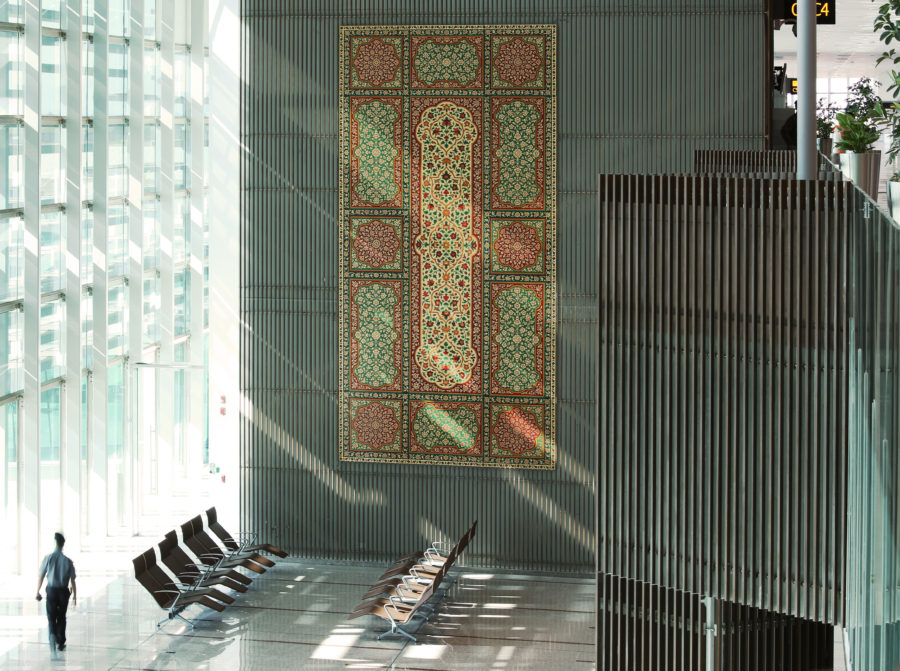 The transportation and installation of the large-scale works was a huge task in itself and was handled by Interwood, in coordination with the architects.

Ustad Abdul Rahman Naqqash, who produced a panel using oil paints on wood in the distinctive style of Multan, says such a representative sample of Pakistan’s traditional crafts has rarely been assembled under one roof. He says one could look upon the collection as a museum of the crafts and hopes that it will inspire other such efforts.

Given the requirements of aviation security, it is hard to see how it could happen, but the sheer scale and quality of the work needs to be shared with a wider audience. Noorjehan hopes that it will inspire work of a similar nature in other public buildings, open to all.