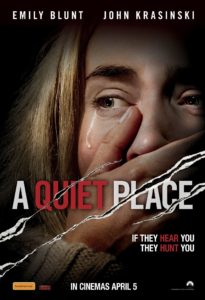 Lee Abbot (John Krasinski) and his family — wife Evelyn (Emily Blunt) and kids Regan (Millicent Simmonds), Marcus (Noah Jupe) and Beau (Cade Woodward) — live in a perilous world where staying quiet is necessary for survival. The faintest sound can lead to sudden, horrific death in this post-apocalyptic world, where ferocious blind creatures, with extraordinary auditory powers use sound to hunt their prey. The members of the family have modified their lives, using intelligence and ingenuity, to remove nearly all sound from their upstate New York farmhouse but calamity, as viewers discover in the ferocious final scene of a rousing prologue, is a careless whisper away.

John Krasinski comes into his own with A Quiet Place, his third feature film as director, establishing himself as a filmmaker of tremendous merit. Emotionally ravaging, but enormously gripping, A Quiet Place is not your run-of-the-mill horror film, which is content with merely scaring viewers. It is an ambitious film, with both a heart and a mind, that works at many levels: it is a brilliant family drama, an effective thriller and, of course, a very scary horror film.

The construction of the characters in A Quiet Place is, perhaps, the film’s greatest strength. Realistic, but nuanced, he characters are easy to like. Their love for each other, expressed mostly without words, is palpable and touching. Lee is a survivalist trying to keep things together for his family using all of his faculties and the resources available to him in a terrifyingly desolate and scary world. Evelyn is a loving mother, keeping hope and optimism alive, while dealing with an ill-timed pregnancy and life in a chillingly quiet world. Regan is the family’s deaf daughter dealing with her impairment, feelings of guilt, resentment and anger, and the fear that she would not be able to hear the monsters coming to attack her. Marcus is sensitive and timid, fully aware of the tragedy that has befallen him and his family, and struggling to summon the strength needed to handle it. The very endearing and young Beau is unable to understand the dangers that surround him and, in a particularly heart-wrenching scene, pays a very high price for a small mistake.

The Abbots are genuinely nice people — lovable, real and relatable. The scares in the film will be scarier and the fate of the family personal, for viewers who will, undoubtedly, come to care for Beau, Marcus, Regan, Evelyn and Lee Abbot. And it will be easy for them to ignore the lapses of logic — and there are quiet a few of those — in the story while being simultaneously engaged and scared.

All five actors — particularly the hearing-impaired, 14-year-old Millicent Simmonds — are in top form. In an understated film with virtually no dialogue, they have little, other than facial expressions and body language, at their disposal, to convey their emotions. This they do with remarkable facility. Watching the skilled actors bringing their characters to life and exploiting the film’s intricately-written story arcs, for immense emotional effect, is a veritable pleasure.

A Quiet Place is a particularly austere film that tells its story with economy and efficiency. Each and every scene is vital to the narrative, but four poignant scenes stand out for their effectiveness and emotional richness. The first takes place when a concerned Lee takes the batteries out of a toy that Beau has picked up in a store. The second is a sadly romantic scene in which he tells wife Evelyn that she looks beautiful. The third — one of the few that features dialogue — takes place near a waterfall where he has a father-and-son talk with Marcus. And the fourth — and the most effective — is the one that takes place towards the end of the film, when Lee tells Regan that he loves her. The film would be worth watching for those four scenes alone but, fortunately, it has a great deal more to offer: a taut screenplay, excellent direction, great sound design, a lovely score, wonderful cinematography, and stringent editing. Its genre notwithstanding, the film is, at heart, a celebration of the human spirit and resilience — and one of the finest releases of 2018.