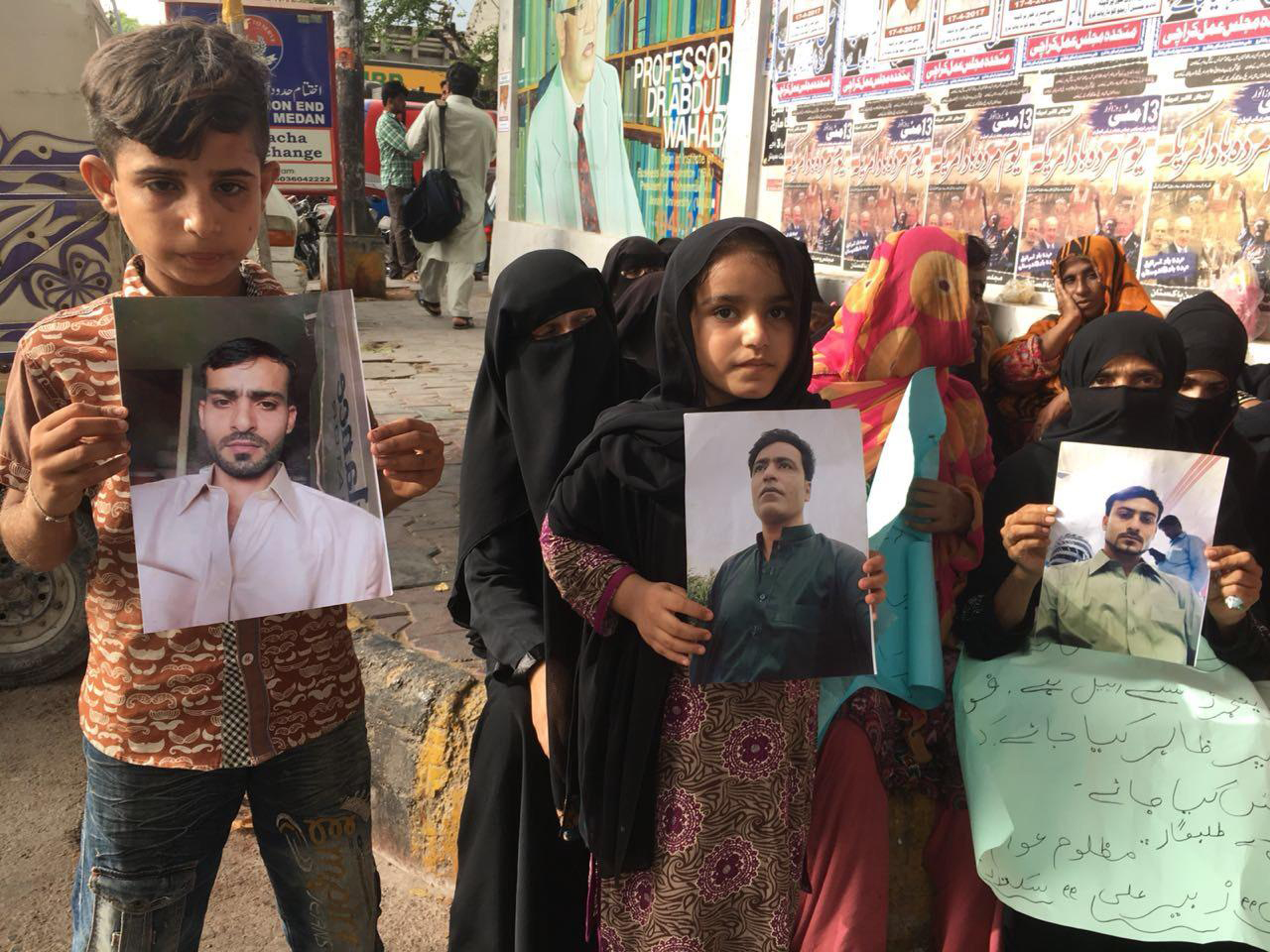 For observing Christians, Good Friday, which fell on March 30 this Easter, is one of the holiest days of the entire year. It marks the day of the crucifixion of Jesus Christ and is a very solemn occasion. But, for the Christians of the working class settlement of Youhanabad, 13-G Gulshan-e-Iqbal, Karachi, the solemnity of the day turned into something more grim when the locality was surrounded by personnel of the law enforcement agencies (LEAs) in a pre-dawn raid. They broke into homes, terrorised the inhabitants and then took away four youngsters — Shiraz, Morris, Shahzad, and Yoshua.

“We were busy making arrangements for Good Friday and Easter, which was on Sunday, till late into the night.  At 4 am, we woke up to noises and shouts of men in plain clothes and a few wearing police uniforms. They arrived in private vehicles bearing no number plates; some of them had masks over their faces,” recalls one elderly resident. “Initially, I thought, there might be a valid reason for the arrests, but the way they surrounded the locality, mistreated people, especially the women, and the threatening language they used was disturbing for all of us. We were even more worried when we subsequently  approached the local police stations and they said they had no information about the raid and the arrests. One policeman said, ‘They might have been  picked up by the agencies, and will return in a couple of days if they have not committed any crime.’”

The four missing youngsters didn’t return, but the abductors came back again on April 15 at the same time — 4 am. This time they entered the houses by cutting locks and grills with cutters. They rounded up the male members of the families, took their photos, showed it to a person who had his face covered. Then they took away six more youngsters — Harrison, Sunny, Waqar, Akash, Wasim and Mill John.

According to Nasreen, mother of the two abducted youngsters, Waqar Yunas and Akash Yunas, “On April 15 men in plain clothes broke into our homes and misbehaved with the women, touching them and using abusive language. Then they separated the male members, tortured them in front of us, and took away two of my sons. One of them, Waqar, is an employee at the local government, union council-18 Sharafabad, and my younger son Akash is only 17 years old.

“We went to the Gulshan-e-Iqbal police station the next morning but they expressed ignorance about the raids and the arrests. We wrote letters to the IG Sindh, the DIG and SSP East about these abductions, but no one took notice. Later, after a week, we came to know that they were in jail and an FIR under ATA 23-A (Possession of illegal weapons) had been lodged against them on April 20 in SITE-A police station.”

The four others were implicated in armed robbery and possession of illegal weapons and were being held at Saeedabad police station. 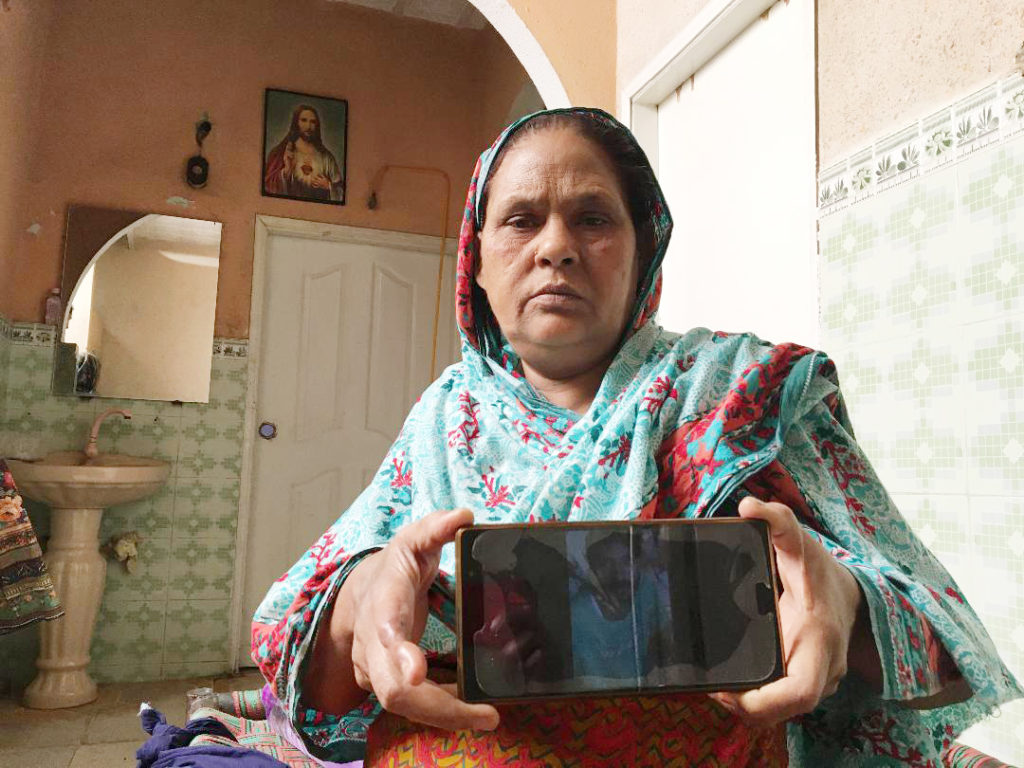 A mother holds up a picture of her missing son.

The third raid occurred on May 8. This time, 14 more youngsters — Faisal, Kaleem, Sumeet, Khurram, Kashif, Imran, Simon, Aamir, Robin, Tanveer, Aman, Shaheryar, Salman, and Sikandar — were taken away. The number of the missing/abducted boys from Youhanabad now stands at 24.

The whereabouts of the first four detainees is still unknown; one of them is, allegedly, working for the LEA as an informer and had assisted them in implicating the rest of the boys. The remaining 20 boys, picked up on April 15 and May 8, are implicated in armed robbery, possession of illegal weapons and unlicensed motorcycles.

Interestingly, the FIRs are lodged in six different police stations of district west: Saeedabad, Baldia Town, Shershah, Mominabad, Orangi Town, Surjani Town. The accused in these cases were sent to jail. SP West Asif Bhugio, however, denies having conducted any raid in Youhanabad which falls in district East. Similarly, the SHO Gulshan-e-Iqbal police station has also expressed ignorance about the raids in Youhanabad. The police officers refuse to unravel the mystery behind who conducted the raids, who kept the boys in custody for almost a week, who tortured them and later handed them over to these police stations, asking them to lodge FIRs, and who sent them to jail. One official on condition of anonymity, revealed that the boys were picked up by a civilian intelligence agency with the assistance of local police officials, but without bringing the matter to the knowledge of senior police officials.

Meanwhile, on May 11, the families of the detained boys approached the Human Rights Commission of Pakistan (HRCP) for help. The HRCP constituted a fact-finding team to investigate the whole issue. They met the families at Youhanabad as well as the concerned police officials and shared the details in a press conference.

Some people see a conspiracy behind the sudden intimidation of the residents of this locality. They think that this Christian locality is being targeted at the behest of influential local builders who are eyeing the land occupied by Youhanabad. Since the law and order situation has improved in the last few years, property prices have risen in the area and any residential project will generate huge profits. However, since Youhanabad is a formal settlement it would not have been so easy to evacuate the residents, as has been done in many informal settlements most notably Bahria Town.

One of the residents elaborates, “A three-storey building built on a 240-yard plot could be sold for 60 million rupees, and if given on rent could earn around two million rupees a year.”

Lawyer and human rights activist, Jibran Nasir, has approached the IG Sindh on behalf of the family of one of the detained boys, demanding an inquiry into the motive behind these abductions and the raids on Christian residences in Youhanabad.  If a proper inquiry is not conducted, he has vowed to take the matter to the High Court.