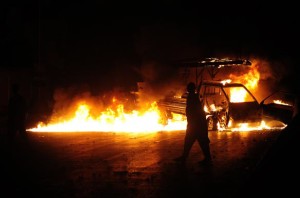 We played this parlour game on the second day of Eid, at a lunch-time gathering of friends and relatives. Every new arrival was greeted with this question: “Can you guess what exactly we are talking about?” One after another, they all had the right and ready answer: Zulfikar Mirza. What else could it have been, particularly in a Karachi get-together?

But that solitary theme had naturally become the fount of numerous interpretations of how a hurricane named Mirza could change the already volatile situation in Karachi. Even before Mirza’s volcanic eruption on August 28, Karachi was the focus of the nation’s attention with its latest round of killings and disorder. July and August were the cruellest months in the city’s recent history and this time, the barbarity that was displayed in the killing fields of Karachi was exceptional.

Suddenly, the endemic anxiety about the state of law and order in Karachi that is echoed across the country was transformed into a panic-stricken apprehension about its economic and political implications in a national context. An element of desperation crept into published analyses of the abiding malaise of a city that, in spite of being a ‘mini-Pakistan,’ has remained out of step with the rest of the country.

Understanding Karachi, for that matter, has forever been an intellectual challenge. The most credible exercise in this respect was the fact-finding mission of the Human Rights Commission of Pakistan to ascertain the recent wave of violence. After three hectic days (July 29-31) of detailed discussions with almost all stakeholders and visits to the affected areas, the respected members of the mission are still engaged in the onerous task of collating the information and impressions they have collected.

However, in an interim report issued on August 1, the mission did make this perceptive observation that “while gangs of land-grabbers and mafias have tried to exploit the breakdown of law and order, they do not appear to be the main directors of the horrible game of death and destruction; that distinction belongs to more powerful political groups and it is they who hold the key to peace.”

In some ways, Zulfikar Mirza’s flaming disclosures have vindicated this observation. Yet those who hold the key to peace are somewhat in a state of disarray and Mirza’s spirited sortie, with guns firing in different directions, could create some new possibilities. We do not have to delve into all the conspiracy theories that are doing the rounds, some more plausible than others, but some revelations are surely at hand. We do not have to lean on that tired expression that the more things change, the more they remain the same. After Mirza, the more things change, the more they cannot remain the same.

One problem in understanding Karachi and unravelling its reality is the prevalence of fear and intimidation that has existed for many years. The media has remained under siege. When speaking on record, the interlocutors are not truly candid about what they know or feel. At the same time, what is said between the lines usually carries its message like a couplet of Urdu poetry.

Perhaps the real problem is not that the media commentators cannot be forthright in their observations. Karachi’s tragedy is that its administration is politicised, corrupt and inefficient. For long, the MQM has exercised its veto power in the governance of the province and the PPP, in the present context, is constrained to work in partnership with it. Hence the taunt that in addition to other mafias, we now have a ‘mufahimat mafia’. 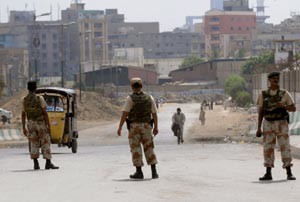 But, against this backdrop, isn’t Zulfikar Mirza a game-changer? This, with all the mystifications that the outbursts of the former home minister of Sindh have instigated, is the big question. To a considerable extent, the recent spell of violence indicated a shift in the power structure of Karachi, in terms of politics as well as crime. New turf wars are being fought in the domains of land-grabbing and bhatta collection. There has been a lot of talk about a surgical operation to be conducted with the help of the Rangers in all areas of the city, without any political discrimination and some moves have apparently been made in that direction.

Nevertheless, there is this ominous feeling that the plot is about to thicken and some fireworks are in the offing. It is the timing of Mirza’s highly-charged oratory that breeds a lot of suspense. After all, Mirza had previously ventured into his tirade against the MQM on a number of occasions with vastly different consequences. In July, his impromptu remarks had immediately sparked city-wide violence and killings and a call from Altaf Hussain was needed to end the agitation. This time, the MQM had no immediate response and no rumblings were heard from within its vast constituency.

Indeed, the spectacle that was staged live on all news channels was unprecedented. It was a thunderstorm that inundated the media. Mirza’s vicious attack on Interior Minister Rehman Malik may have served as a comic relief but it actually raised some serious questions, particularly in the context of his assertion that he was in touch with the ISI.

We may identify at least two other developments that may have some bearing on Mirza’s seemingly solo flight. One, the Supreme Court hearing on the Karachi situation is continuing and there are high expectations that the proceedings will touch upon some matters highlighted by Zulfikar Mirza. Two, the Pakistan army has repeatedly expressed its concern over the Karachi situation in the wake of impassioned pleas for the army’s induction in Karachi from certain quarters. Some observers are also watching with interest the Scotland Yard’s investigations into Dr Imran Farooq’s murder in London last year.

Finally, many conspiracy theorists are convinced that Mirza’s role has been scripted by President Asif Ali Zardari to blackmail the MQM and to regain the Sindh card. Irrespective of how incredulous it would be, given the vitriolic approach that was adopted by Mirza, there is ample evidence that times they are a-changing. And Zardari perhaps knows about the logic of unintended consequences.