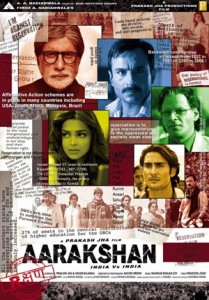 Prakash Jha’s last film Rajneeti, a critical box-office success, dealt with the murky world of politics. His recent release Aarakshan [Reservation], a social drama based in the world’s largest democracy, is about the policy of caste-based ‘reservation’ [quota] in Indian academia.

Leading the vanguard is Dr Prabhakar Anand (Amitabh Bachchan), the crusading principal of a private college in Bhopal, who believes that the ‘reservation’ policy is beneficial to the underprivileged, for performance is not dependent on background. Representing the Dalits (the Untouchables) is Deepak Kumar (Saif Ali Khan), a cleaning woman’s son and Professor Anand’s most loyal pupil, who is the love interest of the professor’s daughter Poorbi (Deepika Paudokone). Saif Ali Khan is not very believable as a low-caste Dalit — he looks more like an upper-caste playboy than a slum boy. The other characters include Mithilesh Singh (Manoj Bajpai) the scheming vice principal who runs a tuition centre as a side business, and Sushanth Seth (Prateik Babbar) the upper-caste son of a college trustee who challenges the “reservation” policy and demands a meritocracy in the college.

Today, as Anna Hazare evokes a pure Gandhian simplicity, Jha’s Aarakshan is imbued with a similar sensibility of bygone times, replete with Ambassador cars, dialogue in heavy Sanskrit, and a khaddi-wearing, checked-scarf toting Bachchan. Like Anna, Professor Anand (Bachchan) takes a stand, teaches for free, and generates popular outpouring from grateful ‘have-nots’ who come to his cowshed for math coaching. The continuous scene-stealer is Big B who pontificates at regular intervals on all that is righteous, in crisp, deep, stern tones, reminding lesser mortals of their shortcomings.

The bad guys in Aarakhshan are the politicians and the greedy tuition centre owner Singh (Manoj Bajpai), who symbolise the ‘new’ India and centre their life on money and status; they demand a change in the “reservation” policy and recruit students to expensive tuition centres, when actually the task of a good education should be accomplished at college. Besides the policy of quotas in education for Indian castes, the film highlights the commercialisation of the education system in India, where parents bleed their rupees into high-cost coaching. The two themes are divided between the two halves of the movie and don’t really come together to flow jointly in the narrative.

Because of its contentious themes, the film was banned in U.P. and two other provinces in India; the ban was subsequently lifted by the Indian Supreme Court. The Deepak Kumar and Poorbi Anand love story remains watery and incomplete, as indeed it must, for if the caste-system is alive and well in India, then can a poor Dalit marry an upper-caste Brahmin girl?

The denouement is the arrival of retired college founder, Shakunthala Thakral (Hema Malini), who, like the Good Witch of the North, sprinkles Professor Anand with lashings of approval while the bad guys wither on the sidelines. This is the final feel-good factor when good triumphs over bad.

So if you’re in the mood for some ‘socially conscious’ Bachchan melodrama about an issue that leaves you perplexed, about people whose social relations you simply cannot comprehend, with heavy dialogue in a language you can’t understand, then maybe Aarakhshan is the film to watch.

This movie review originally appeared in the September 2011 issue of Newsline under the headline “Black and White.”