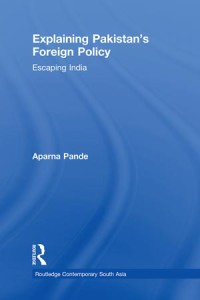 A talk show anchor at a leading TV channel cut out a portion of the speech, juxtaposed it with the speeches of political leaders, and invited a guest to comment on the cowardly behaviour of the country’s leaders. Why would they speak of commonalities with Pakistan’s rival state? asked the anchor. And as was expected, condemnations followed — some against Sharif, others against the TV anchor.

For Aparna Pande, nothing in present times could have strengthened the argument of her dissertation more than the diatribe that followed Sharif’s speech. Her book Explaining Pakistan’s Foreign Policy is subtitled Escaping India.

By “escape,” Pande refers to Pakistan’s “repelling” and even “repulsive” behaviour toward India. Many other scholars, including Pakistani ones, have written on the subject; words like “identity crisis,” “dichotomy,” or “divide within” are commonly used for Pakistan.

Pande espouses that the country has been living in a “virtual location” discarding its shared cultural, linguistic, ethnic and historic ties with India. However, on the flip side, it can be argued that it is the disputes over these ties, both historic and cultural, that made “escape” a policy choice. For Sharif, there is room for shared ties; he even candidly quoted this in the context of the Punjab. For the anchor and her guest, no bond has ever existed between the two countries.

The question that needs to be asked is: Why would Pakistan “escape?” Pande traces it to Pakistan’s justification of being the “other” in the subcontinent from which it was carved out in 1947. Thus, being a mirror-image of India would have put a question mark over Pakistan’s genesis, and hence, for Pande, the elite “consciously” titled Pakistan’s foreign policy as anti-India. This injected ideology is a key — Pande calls it the “third” — determinant of Pakistan’s foreign policy.

Throughout the book, Pakistan can be sensed as having insecurity issues vis-a-vis India. Pande would argue that such feelings explain Pakistan’s foreign policy relations; whether Pakistan allied with the US in the Cold War or after 9/11 — India was the only variable. China, which has border disputes with India, is a more natural ally to Pakistan. Even if Pakistan were to reach out to Papua New Guinea, chances are that India would be supporting the western half of the Oceania Island.

However, there has been a context that fed this insecurity. Even Pande acknowledges that immediately after Partition, statements attributed to the top leadership of Congress and its allies in Pakistani-incorporated areas made the Pakistani elite sceptical of India. India’s desire to re-annex Pakistan, the fear of “Akhand Bharat,” India’s blockade of Pakistan’s water supply — all ignited fears in Pakistani minds.

While Pande may agree with the above observation, what she finds odd is the continued presence of insecurity. For one, all the statements or acts in the initial days are time-bound. She shares examples of how, for instance, even immediately after Partition, Pakistan’s Pashtun nationalist leader expressed his desire to remain with Pakistan contrary to the fear that India would play her cards.

Moreover, being a foreign policy specialist, presently based in the Hudson Institute in Washington DC, Pande may also understand that in many post-colonial states, border disputes have dangled countries on the wall of an insecure pit. Like Pakistan, India too has problems with its neighbours. Many a time, the same fear of encirclement by neighbouring countries is voiced in India as it is in Pakistan. Likewise, how could India’s deployment of troops along the Pakistani border and a bitter history of conflict with Pakistan be justified?

Again, tracing back to the partition of India, Pande asserts that “in the eyes of [Muslim] leaders, the pursuit of parity transformed from that between two political parties, the Indian National Congress and the All Indian Muslim League, into that between two countries, Hindustan and Pakistan.” It is this parity which, she argues, forces Pakistan to see India on equal footing.

While the link from pre- to post-Partition can be followed, her pre-Partition explanation of the parity demand of the Muslim elite in that era would have further strengthened had she added some thoughts on “why” such a demand was voiced. Can “political Islam” be traced back to this? Pande, a Fellow at the Hudson Institute’s Centre on Islam, Democracy and the Future of the Muslim World, knows the subject well. It is possible that she wanted to retain her exclusive focus on the foreign policy domain.

Overall, the book is easy to follow in style and content; it may mollify the angers of those who are fed up of excessive labelling from every side by TV commentators. However, discarding the book because of the writer’s birth country — India — would compromise one’s intellectual ability to respond fairly. Like it or not, such an approach will also validate Pande’s assertion of Pakistan “escaping India.”

This book review was originally published in the September 2011 issue of Newsline under the headline “Inescapable India.”