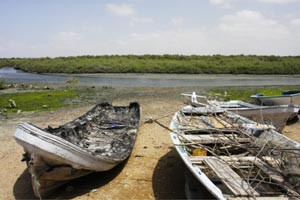 Abdul Ghani, 40, and Abubakar Mirbahar, 50, were the leaders of the fishermen’s community, comprising 300 houses in Kakapir village located on the east coast of Karachi. The two were kidnapped and killed on May 5, 2011, allegedly by a land mafia group led by Younus Mirbahar, a local bigwig with political connections, who wanted to occupy the mangrove land. Mirbahar made sure the local police did not register an FIR for several days and even when they did, he managed to secure bail by producing a fake medical certificate testifying that he was under treatment in a hospital on the day the two fishermen were murdered.

The bereaved family and the villagers have been protesting on the roads and crying for justice for the past three months — but to no avail. In fact, they live in perpetual fear as many among them have been tortured by Mirbahar’s gang of goons. “Every day fully armed persons in vehicles patrol the area, warning the villagers to withdraw the case and vacate the land. I am spending my nights in the forests because they are threatening to kill me,” reveals Akbar, the local leader of the Pakistan Fisherfolk Forum.

Village Kakapir lies in the arch formed by Mauripur Road as it bifurcates to go west towards Hawke’s Bay and east towards Sandspit. Sheltered from the sea by a naturally raised mound of sand with a row of beach huts to the south, the village is surrounded by mangrove forests and sea creeks to the north and west. To the east, the strip of land on which the village is situated runs into more mangroves punctuated by land formations that make for a small sheltered harbour.

Nearly a 100 years old, village Kakapir was established by fishermen hailing from Lyari, which, at that time, was itself a fishing village. They settled in both Kakapir and Shamspir, now known as Hawke’s Bay. The residents of Shamspir usually migrate to Kakapir during the hottest months of the year when dangerously high tides bring all fishing activity to a halt. The fishing community have now chosen Kakapir as their permanent residence and have constructed houses and schools there. With the availability of a natural harbour, it is considered to be a prime location.

Very close to Kakapir village is Younusabad, a comparatively well-developed residential area that was established by Younus Mirbahar in the 1970s. Younus was once a fisherman; now he is a multimillionaire and owner of a vast track of land located near the sea. It is alleged that he is involved in the business of land grabbing near the seaside and has sold more than 27 acres of land in Kakapir village and the surrounding area. Haji Younus is reputed to be adept at turning forest land into private holdings by using his well-established connections with revenue department officials and ministers.

“I have owned this land for the last 20 years and it is my right to clear the mangroves to pave the way for construction,” says Haji Younus angrily, as he pushes some ostensibly very recently acquired documents before me to prove his point. He rejects all claims of the villagers.

The coastal mangrove ecosystem in Pakistan has been seriously damaged over the last 50 years. Existing estimates show that mangroves cover approximately 129,000 hectares in the Indus Delta and nearly 3,000 hectares on the Balochistan coast.

Over the last decade, there has been increasing concern over the manner in which human activities have altered the mangrove ecosystems of Pakistan. Paucity of freshwater due to upstream diversions of river flows for agriculture, water pollution, overgrazing, logging to use timber as fuel, unsustainable fishing levels and deforestation for construction and development are seen as the main factors associated with biodiversity loss in the mangrove forests on the coasts of Sindh and Balochistan. The level of degradation of forests in the Indus Delta was estimated at 6% between 1980 and 1995. At present, only 15% of existing mangroves are considered healthy.

Considering the significance of the mangrove swamps in nurturing shrimps and prawns, in addition to protecting the land from sea tides and erosion, the local community of Kakapir village turned their attention towards protecting the environment by promoting the cultivation of mangroves and taking other initiatives to preserve endangered species. In fact Jannat’s son, Abdul Ghani, a local fisherman, had learned the importance of conserving mangroves during his employment as a social mobiliser for the World Wide Fund for Nature (WWF), who had started a mangrove protection project in 1999 in Kakapir village. He subsequently established the Fisherman Development Organisation (FDO) and started working for environment development, including the provision of educational and health services for the villagers.

Keeping in view the environment protection initiatives undertaken by fishermen in Kakapir village, the Global Environment Fund (GEF), an auxiliary of the United Nations Development Programme (UNDP), engaged with FDO in an ecotourism project. Funded to the tune of Rs4 million, the initiative included a fully equipped information centre and a pier for three fibreglass outboard-fitted boats. The purpose of the project was to raise awareness among fishermen about the importance of mangroves and to provide them with alternative sources of income during the off-season in the hot summers when they stop fishing as it is peak season for fish breeding. The project was unique in nature; the floating boat houses not only provided citizens with the facility of mangrove safaris in their leisure time, but also created awareness regarding the country’s ecosystem and the importance of mangroves. Moreover, the fishermen’s community also found in it an opportunity to supplement their incomes in the off-season.

Meanwhile, Haji Younus continued to encroach on more land by chopping down the mangroves and converting the swamps into plots for sale. He has his sights on Kakapir village, which is surrounded by mangrove forests. So, initially he tried taking over the school building and the ecotourism office, as well as other facilities that were funded by UNDP for FDO. The villagers resisted it and started campaigning against the encroachment. Consequently, Haji Younus started threatening Abdul Ghani and the villagers, and occupied the school building with the support of armed thugs.

The Pakistan Fisherfolk Forum, an organisation that works for the betterment of the fishing community, in addition to protecting the environment around the coastal areas of Sindh, raised their voice against the illegal cutting of mangroves and started initiatives to protect the land and the fishermen’s community from the threats by the land mafia. Abubakar Mirbahar, the president of Fisherfolk Forum of Kakapir village, joined hands with Abdul Ghani to wage a combined struggle against the land mafia. 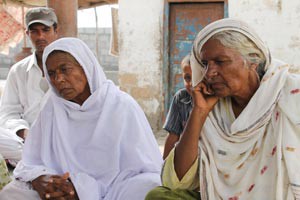 Subsequently, in order to enforce implementation of the law, the peaceful fishermen’s community approached the courts to stop illegal cutting and encroachment on forest land at Kakapir village. The court subsequently issued a stay order, making it incumbent upon the police to take proactive action against anyone involved in any illegal cutting of mangroves and occupation of forest land. But the illegal activity continued nevertheless and the police did not intervene, neither did they fulfil the court order by registering any cases against the violators. “Though we have sent several letters and reminders to the Minister of Forests, Zulfikar Mirza, pointing out that Haji Younus is involved in the illegal cutting down of mangroves and the occupation of forest land, the minister has paid no heed. Instead, he attended a tea party hosted by the culprit at Younusabad. Moreover, Qader Patel, the PPP MNA from Keamari town, is a close friend of Haji Younus and has always stood by him. Consequently, the local police have still not arrested Haji Younus and his son despite their involvement in the murder of the two fishermen,” says Muhammad Ali Shah, chairman of Pakistan Fisherfolk Forum.

Additionally, Kakapir village has been under siege since May, when Abdul Ghani and Abubakar were murdered. Armed goons of Haji Younus have set up camp at the entry and exit points of the village and have kidnapped and tortured several activists. Among them was Latif Dorai, who nurses a broken leg and two broken ribs. “I was in their illegal detention for 10 hours. More than 15 people kidnapped me on the way to Kakapir village and severely tortured me in the autaq (guest house) of Haji Younus,” says Dorai. “During my detention, Younus and his son, Zulfiqar, repeatedly threatened to burn me alive. However, when they learnt that Muhammad Ali Shah was arriving with a large number of fisherman to rescue me with the support of police, they left me unconscious by the roadside.”

In spite of their brutality, Haji Younus and his gang continue to move around freely and enjoy the patronage of officials and the police. The Human Rights Commission of Pakistan, in its investigative report on the murder of the two fishermen, clearly states that Haji Younus and his son are involved in the two murders and the usurpation of the mangrove forests land. But the report has fallen on deaf ears.

The peaceful villagers meanwhile, are being forced to spend days and nights hiding in the forests in the face of death threats from the culprits.