By Leena | Society | Published 10 years ago 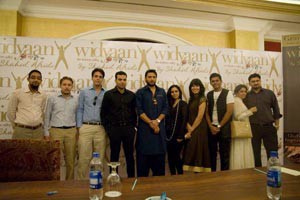 After creating a buzz with numerous billboards and advertising campaigns all over Karachi, Widyaan: The Fashion Valley was finally launched through a grand exhibition at Imperial Lawn Clifton, in August.

The anticipation for Widyaan was no doubt heightened by the fact that Pakistani cricket sensation Shahid Afridi, who was also actively involved in the collection’s designing and manufacturing process, was endorsing it. Shahzad Miannoor, the owner of Madni Textiles, is the main person behind the operative scheme of the brand.

The exotic opulence of the Mughals served as an inspiration for the collection, which consists of 21 hand-embroidered outfits set off with intricate motifs, embellishments and trappings. Sadia Murtaza and her team of six assistant designers took pains in crafting each piece of the collection. The grand ambience, the stylish display of the elaborate designs and the draping on the mannequins served as a reflection of the creative stature of the exhibition’s organisers.

Despite the presence of numerous celebrities from the world of fashion, film and television, excitement levels only reached fever pitch at the arrival of Shahid Afridi. The media was eager to learn more about the successful cricketer’s latest business endeavour.

Mobbed by journalists, photographers and adoring fans, Afridi brought attention to his desire to make Widyaan an international name that could be recognised on a global level, just like his “Boom Boom” sixes.

We have no doubt that the beautiful and affordable collection will be particularly well received by Afridi’s younger fans. As anyone who has seen him on the cricket field will testify, when Shahid Afridi sets his sights on achieving something, he always ends up seeing it through to the end.

This article was originally published in the September 2011 issue of Newsline under the headline “The Ultimate All-rounder.”