The underground music scene in Karachi is bursting at its seams with talented young musicians who want to make it big, or at the very least get their music out among the general public. However, the perennial problem remains: they have no real platform where their voices can be heard.

Still, some underground bands are starting to get their music out there and are playing in as many gigs as they can in order to create a fan base and get some recognition. And while the journey to success is a long and difficult one, there are certain bands that are on that path and want to make it big.

Spoonful is one of those exceptions. A rock quartet, Spoonful comprises Hamad Khan (vocals, lead guitarist), Aziz Kazi (drums), Ali Haider Habib (bass, guitar) and Jasir Abro (bass, guitar). The band was formed in October 2006 when the four musicians met at SZABIST where they were enrolled in the media sciences programme. Each being inspired by blues, funk and rock, including artists such as The Beatles, Pink Floyd, Jimi Hendrix and Derek Trucks, they discovered a common meeting ground in terms of music. Khan explains, “Soon afterwards there was a small college event and they wanted a live band to perform. The four of us decided to get together and jam. The show went really well, so we decided to do this more often.” The rest, as they say, is history.

Since then, Spoonful has performed several times, always before captive audiences that long to hear even more. Such fascination is not unfounded. Watching them play is an experience because of how raw and explosive their music sounds. The intricate guitar riffs, smooth bass and beat of the drums all have impeccable timing, and you can’t help but bob your head and move your body to the rhythm of their music.

While Spoonful play more bluesy music that most are familiar with, there are also bands that are introducing a sound that is more experimental and psychedelic in nature. One such group is //orangenoise.

In case you’re wondering why “//” is included in the name of the band, Danny P offers an explantion: “It looks nice aesthetically. Plus URLs of websites begin with //.” For example: http: ‘//’www.youtube.com. Welcome to 2011: it seems even band names are now rolling with the times!

Despite being just a little over a year old, the band is an extremely talented bunch. //orangenoise was formed when Wynne and Danny P (who were previously together in a band called Look Busy Do Nothing) met up with Hyatt and Riedinger (who are also a part of Mole, another experimental underground band). Wynne says that “they hooked up with us for a few jams and we ended up making some noise.” And boy do they make noise all right, and just the right kind!

Inspired by artists such as Pink Floyd, Godspeed You!, The Verve, My Bloody Valentine, Porcupine Tree and several others, //orangenoise has a distinctive sound and music sense. They held their first concert at the PACC for the World Music Day Festival, but have since performed at the Base Rock CafÃ©, the Arts Council, The Second Floor (T2F) and The MAD School. For //orangenoise, performing in front of an audience is “a trip!”

“We love to feed off of the crowd’s energy and throw it right back at them. It’s an insane trading of the senses,” reveals Wynne. The audience at //orangenoise concerts is caught up in a whirlwind of different sounds and powerful music. When the show is over and the dust settles, the crowd is left in sheer awe and delight.

Both //orangenoise and Spoonful are completely dedicated to producing new, fresh sounds and it seems like their efforts are not going to waste. Having had successful performances at different venues such as the PACC, Base Rock CafÃ©, The Second Floor (T2F), The Elbow Room Lounge and SZABIST, it was only a matter of time before Spoonful caught the notice of Aamir Zaki, one of the most talented and influential guitarists in the country.

Spoonful and Zaki were introduced to each other by Faisal Malik (the owner of Base Rock CafÃ©). “We exchanged numbers, jammed and it just clicked! We sounded really good together,” says Khan. According to Zaki, “The Spoonful members are focused musicians and are very tasteful. They are way ahead of the other alternative bands and not totally underground.” The band has two original songs called “Sue’lee” and “Tulle” and is currently writing and composing more music with Zaki as they prepare to go into the studio and record their album. For Spoonful, playing alongside Aamir Zaki is, to put it lightly, “an honour.” “Playing with your childhood guitar influence is out of this world. Playing under his guidance is like going to music school,” says Khan. 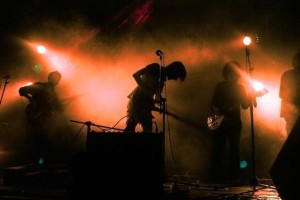 Meanwhile, //orangenoise have already released a five-track album titled “//veracious” (which is free to download on their Facebook page). Their music has a trippy and echo-ey sound to it; it is distinctive and unique and definitely an interesting listen. They even have a video for their song “On The Run,” shot by Nadir Shehzad Khan (from the underground band Sikander Ka Mandar, also worth checking out). While “On The Run” is an upbeat and fast-paced song, “Trust” has an almost hypnotic feel to it — starting off slow, it puts you in a sort of dream-like state until the heavy guitars kick in. It is Wynne’s favourite song to play live as “Danny P does most of the singing in the track and all I’m left with is making noise.”

In //orangenoise’s case, one cannot define their genre of music as they are an experimental band. “We’ll wait for other people to categorise it,” says Wynne. They have managed to create an entirely new and different spectrum of music, it’s modern and current, and yet it has a classical touch to it.

Mole is yet another upcoming band that is passionate about music and is certainly making strides in that direction. After an appearance on Coke Studio this season, they showcased a new wave of music that is taking over the younger generation. Inspired by musicians like Radiohead, Tame Impala, Flying Lotus and Boards of Canada, among others, it is difficult to label their genre of music as they try to incorporate different kinds of sounds. Explains band member Danial Hyatt (who is also part of //orangenoise and is Rohail Hyatt’s son), “In a nutshell, it can be called experimental/electronic/dance.”

Their recent performance on Coke Studio was a fusion of East and West for the instrumental version of “Baageshri.” “We have always been really interested in eastern music. Performing on Coke Studio was great!” says Hyatt. The track they played on Coke Studio was a foot-tapping melody infused with the eastern sound of the tablas and effects of more modern and western instruments such as the synthesiser. Hyatt adds, “We got a really good response and the track is something that stuck in people’s heads.”

Mole has already released two EP’s (“We’re Always Home” and “Visiting”) and would like to work on new material for their third EP. After appearing on Coke Studio they have definitely broadened their horizons in the process.

The music scene in Karachi is slowly evolving. The best part is that these youngsters are charting different directions in music and are not limiting themselves or their audiences. With their eclectic sounds, they are striving to make a name for themselves and share their music with the rest of the world.

Click play below to watch a short video on Mole and their Coke Studio performance:

A version of this article originally appeared in the September 2011 issue of Newsline under the headline “Almost Famous.”