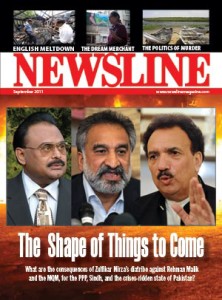 Had he had enough of the MQM’s list of demands and Malik’s unilateral decision to conduct the surgical operation in Lyari, a PPP stronghold, first, against his wishes?

Where did his boss and best friend Asif Zardari figure in this whole scheme of things? Did he give Mirza carte blanche to put the MQM on the back foot so as to force them to return to the cabinet on the PPP’s terms and, alongside, secure the nationalist vote by wielding the whip on the MQM — or was the doctor acting on his own?

The truth may never be known, but Mirza’s accusations against the MQM are of a grave nature and need to be investigated, as do allegations against Lyari’s Amn Committee and the ANP, both of whom Mirza has conveniently left out of the loop.

Certain quarters are demanding to know why Zulfiqar Mirza, who was the former home minister of Sindh, as well as the IB, the ISI and the MI, which were the authors of some of the incriminating reports, failed to take any action against the extortionists, land-grabbers and target-killers named in them. Why was this city, which is said to be the country’s economic lifeline, allowed to descend into anarchy?

Does an economically crippled Karachi serve the interests of any of the stakeholders who are fighting to wrest control of the city? Or is it only about bhatta, land grabbing and ethnic cleansing?

As it is, the law enforcement agencies have been rendered toothless and redundant by the coalition partners, who make constant demands on them to release any criminals they may have apprehended because they belong to one party or other. Shockingly, the parties even demand quotas in the police force, in order to protect their own criminal outfits, who are armed to the teeth.

The deweaponisaton programme is doomed to fail because no party is willing to give up its cache of arms. Why, Mirza proudly confessed to giving licences for arms to 300,000 men of honour. Very honourable, indeed!

Karachi has continued to bleed because those who are responsible for its present dismal state have been allowed to go scot free at the behest of their collaborators. Unless this lawless brigade is brought to justice, Karachi will continue to bleed — to death.

Of course, there is the Supreme Court’s suo moto hearing on target killings being held in Islamabad. But whether that yields any substantive results remains to be seen.

Vote in our poll

Newsline‘s September 2011 issue will be on newsstands soon.