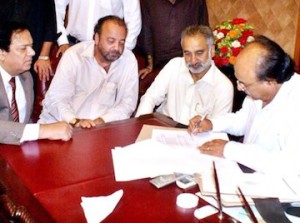 The U-turn that the Pakistan Peoples Party (PPP) took was swift. It left its erstwhile partner, the Muttahida Qaumi Movement’s (MQM) leaders scratching their heads and fanned tension on the streets of Karachi. Who would have thought that the local government system, so important for the MQM’s role in urban Sindh, would turn topsy-turvy overnight?

For months, the PPP sent mixed messages to the MQM on the question of the Sindh Local Government Ordinance (SLGO) 2001. Then as the MQM broke away from the coalition government in late June this year over a row on two seats in the Azad Kashmir elections, the situation turned suddenly and the MQM was caught off guard.

Prime Minister Yousuf Raza Gilani wasted no time in completing the devolution of more authority to the provinces via a special meeting of the federal cabinet. The SLGO 2001 was repealed, and in the days that followed, bureaucrats were appointed to manage the finances of local governments.

But after hundreds of people were killed on the streets of Karachi in the past few weeks, the government agreed to revert back to the local government system and the commissioners were removed. But right now elections are far off and Sindhi nationalist parties are up in arms against what they consider the MQM’s hegemony over the urban centres of the province.

The way the PPP has reintroduced the commissionerate system has raised many eyebrows. Bureaucrats go back to being in charge in all Pakistani cities, except for Karachi and Hyderabad. However, only time will tell if this unusual approach towards local governance can actually work.

“Democracy is all about giving representation to people at the grassroots level,” says the MQM’s Nasreen Jalil, a former naib nazim of Karachi. “A bureaucrat will never be as responsible towards the people as an elected representative.”

The hallmark of the three-tier local government system introduced by President Pervez Musharraf in 2001 was the election of councillors to the union councils, which comprise a few thousand homes and commercial establishments. Supervision of matters related to civic life devolved from the provinces to the cities, the towns, and further down to the union councils. Various departments including education, health, works and services were handed over to the local governments. The bureaucracy started reporting to the elected representatives and each town had its own funds to spend at will.

Jalil says it is ironic that while on the one hand the PPP government claims to be the custodian of democracy, it enforces a repressive system, which most modern nations have discarded. “It seems we are going back in time. All the progress, that we made on various projects will be lost.”

While the local government system was in force, city council meetings were lively and result-oriented. The transfer of power from the elite to the masses meant more public participation in decision-making. “When your sewerage line is choked or rain water has accumulated outside your house, it is always easy to go and knock at the door of your union councillor who happens to live in the same area,” contends Jalil.

Under the local government system, the town administrations had their own development budgets and the resources of the city governments were always at their disposal.

A former city nazim Naimatullah Khan of the Jamaat-e-Islami seconds Jalil on the matter. “I will sum up the transition in one sentence: A day before I took over as mayor, Shafeeq Paracha was the commissioner of Karachi and a day later he was a DCO (district coordination officer) reporting to me. That is how huge the change was.”

The argument that local governments had become too politicised to address issues of public interest without political considerations is unfounded, he says. “The commissioner or the bureaucrats running the show now will always take their orders from the chief minister. They will never go out to see the problems people face on the streets.” The local government system consisted of representatives from across the gender, ethnic, political and sectarian divide. This made corruption difficult, if not impossible.

Khan recalls a case involving the Karachi Water and Sewerage Board (KWSB). “A building contract was being awarded at an estimated budget of Rs250 million. Only one bid came and it was exactly for Rs250 million. That was a strange coincidence. We annulled the tender and got the work done for Rs 60 million.” According to Naimatullah Khan, there were many watchful eyes always ready to pinpoint loopholes in governance; it was difficult for anyone to embezzle funds in the local government system.

The space available for the local government to spend money in accordance with its own needs made the city administration financially independent as well. In the four years starting from the system’s installation in 2001, the City District Government Karachi (CDGK) jacked up its revenues to Rs53 billion from Rs6 billion, a staggering increase.

Karachi underwent unprecedented development in the past decade as the development budget was directly transferred to districts and towns. Bridges, underpasses, public parks, an expanded road network, and a better water and sewage system were built.

However, it was not the same in other parts of the province. Imtiaz Shaikh, a former civil servant and now a politician, maintains that some parts of interior Sindh suffered as local governments were used to undermine political opponents. “In Sheikhupura, for example, the Jatoi and Mehar tribes have been opposed to each other for several decades. If a member of one tribe became a district nazim, it would spell disaster for the other tribe.” He also cites lack of capacity on the part of the local government to handle the workload. “The transfer of functions of 17 departments was too much. School and health facilities run by towns are in tatters. Moreover, powers have been used to recruit political favourites.” In parts of Sindh, some town nazims were illiterate and mistreated their subordinates. “This affected the working of different departments as there was far too much political interference,” says Shaikh.

Karachi, which has witnessed an increase in ethnic clashes in past few months, also faced several problems on this account. Even though the Awami National Party (ANP) supports the appointment of commissioners, “Pashtun-dominated areas received little attention in the days of Mustafa Kamal,” says an ANP leader. “They were excluded from development projects. Visit any place near Benaras and Sohrab Goth and you will see the abysmal condition of civic life.”

Meanwhile, Taj Haider, a PPP leader from Karachi, argues that the Sindh Local Government Ordinance runs contrary to the constitution since the city mayor is indirectly elected. “The first issue that arises is that financial matters are handed over to a person who is not elected by the people,” he points out. “Then the concept of provincial autonomy also gets undermined.”

But as Dr Ishrat Hussain recently pointed out in a column for The News, Pakistan cannot afford to further alienate different segments of society. If there are any drawbacks in the local government system, they should be removed but the process of devolution must continue.

This article was originally published in the September 2011 issue of Newsline under the headline “To Be or Not To Be.”