The Red Bull Tum Tum Pa World Finals for freestyle drumming was held in Rio de Janeiro on June 11, 2011. Pakistan’s finalists, a quartet who go by the name “Chaar Payee” comprising of Talha Jamil, Ahmer Mubashar, Usman Qureshi and Raja Nabeel Banwa, came in fourth place (tied with Peru and the US) and were the only Asian country in the top five. Not only did Chaar Payee win the hearts of the Brazilians and other foreigners taking part in the event but they also managed to capture the essence of Pakistan as they performed a cover of the single “Cursed” by Pakistani band Overload (they even got to meet Farhad Humayun, the drummer and vocalist for Overload).

In Rio, Chaar Payee presented Pakistani talent to the world and showcased Pakistan in a positive light. In this interview, the percussive quartet talks about their journey to Brazil and the overwhelming response they received there. 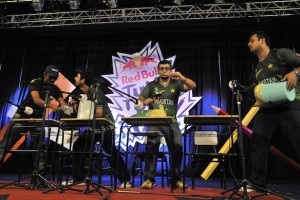 You guys probably had to go through a rigorous series of tryouts and practice sessions before being chosen to go to Rio de Janeiro for the Red Bull Tum Tum Pa World Finals 2011. What were the tryouts like? How was the competition?

Well it was tough, that is for sure. We went through three rounds starting from the college round, then the Lahore finals and then the final round in Islamabad that would decide who the national champion would be. During all this, because of the tough competition, we had to come up with new and improved stuff through hours and hours of creative practice sessions. However, at the end of the day it all paid off: we came out on top after the three rounds.

What made you decide to go for the Red Bull Tum Tum Pa national tryouts? How did you all come together for it?

We actually didn’t know about this competition until we got a call from our friend who works at Red Bull. Since we all are part-time musicians, he thought he should tell us about the competition. Hence Ahmer and Nabeel were approached by Riyan (from Red Bull) to try out for the first round. As far as knowing each other is concerned, the three of us (Talha, Ahmer and Usman) are actually spearheading a band called “2o0o” [Do-Hazaar] and Nabeel is the lead vocalist of a progressive metal underground band called Odyssey. Ahmer and Nabeel went to the same university and were part of the institution’s music society, and so they were already well acquainted.

What was it like to use objects such as pens, pencils and rulers as opposed to the standard musical instruments? Was making music more difficult?

It was a bit of a quandary for us since we did not have the use of any harmonic sounds (any string instruments, if you wish), but we were all pretty aware of how we wanted to go about this right from the start.

Secondly, since we all are musicians, we didn’t have any problem sticking to the rhythm and making sure that everyone carries his part off flawlessly. And it was fun to actually show our talent in a unique way in front of an audience.

The four of you go by the name “Chaar Payee.” Why did you choose this name?

It was quite random yet creative. We had to come up with a name on the last day of registration for the competition. Red Bull had been contacting us over and over again for a name. Out of nowhere, in complete spontaneity, Ahmer said, “Okay, you can call us ‘Chaar Payee.’” At first we all thought he was talking about the traditional “manji” but it soon dawned upon us that the wordplay was in fact tied to Punjabi and that the concept of “Four Brothers” was being instated. It’s simple, yet catchy.

“Arif Gondal” is your self-created instrument. What exactly is it? What inspired you to make it? And why did you choose to name it “Arif Gondal?”

We knew that creativity mattered a lot in the competition, and so we put our heads together to make something really different that would definitely give us an edge. So we decided to make a customised drum kit (bearing in mind that Red Bull Tum Tum Pa was a freestyle drumming competition). Arif Gondal is basically an amalgamation of things, such as a box of paper ream (used as the base), a steel geometry box, a stationary holder, a paper stacker, some Red Bull cans, a lot of tape and paint brushes. Just like “Chaar Payee” the naming of our instrument was also very random. We wanted to give it a name and a separate identity and make sure that people would remember Arif Jee, if not us. So, one of us said, “Let’s name it Arif,” and another voice piped in, “Okay, call it Arif Gondal.” Then the final christening commenced when we said, “It’s Chaudhry Arif Gondal.”

You guys decided to cover Overload’s single “Cursed.” Why did you choose this song? What was it like to do a cover of it in Rio? How do you think the audience responded?

This is just something that both Ahmer and Nabeel had thought of when they each first found out about the competition. So when Chaar Payee met for its first jam session, they both had the same idea. From then on we decided to just go with it. We had a really good feeling that we could pull it off with great finesse. As the competition was all about freestyle drumming, picking a song by Overload, a percussion-based band, was the perfect choice. As far as the audience was concerned, it was indeed an overwhelming moment for us to see them enjoy the song as if it was a local tune. The biggest surprise we got from the crowd was when they actually cheered us on while chanting a chorus of “PA-QUIS-TAOOOO” (“Pakistan” in Portuguese). They kept on cheering us on throughout the evening whether we were onstage or off. We were the only team other than the local Brazilian team that the crowd took a clear liking to.

Usman cut his finger four hours prior to the performance and you guys still came in fourth place! How did he cut his finger? Do you think it affected the overall performance? What was everyone’s reaction to the injury?

That’s one thing we’ll never forget. We were already facing a problem pertaining to Talha’s health as he was down with a bout of the flu and had a fever. The icing on the cake was Usman’s injury.

We had to make this shaker out of pencil leads, so Usman was slicing open pencils with a cutter. Unfortunately, the cutter slipped and carved his left thumb open. Obviously, it gave everyone the jitters since it was happening right at the last moment, but credit goes to Usman for sticking with our purpose and not wimping out. In fact, he was adamant that because we’d come all the way for just these two minutes, we’d better make them count. Sure, we had to forego some last minute Usman-antics that may just have perfected our overall performance, but then again, the rest of us were content. It was good enough that our teammate wasn’t being sidelined, and due to the excellent co-ordination that all of us had developed over the course of the last three months, it all went smoothly. It was after the first round performance that he couldn’t take it any longer, and we had to rush him up to the clinic for stitches. Red Bull was quite cooperative and everyone checked up on Usman, even long after the competition was over.

You guys represented Pakistan in Rio. How did it feel to be up there performing as Pakistanis to a Pakistani band’s song?

It was the best feeling. Firstly, we all are quite patriotic. (Okay, maybe we don’t give off the vibe, but we are). When you’re representing your country on an international platform you have to tread carefully. We were quite nervous but at the same time quite confident that whatever happened we would make sure that Pakistan received the respect and dignity that it truly deserved. Suffice to say, we think we succeeded. It was quite an achievement for all four of us as we pulled off the Overload cover quite well. We were concerned that people wouldn’t understand our culture and beats in the land of Samba. But then again, music has no boundaries and it speaks a universal language. 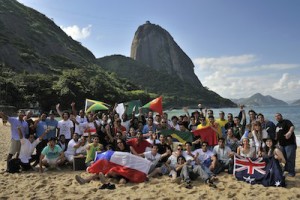 What was the highlight of the entire trip?

For us, this entire journey has been an experience. And it was certainly a beautiful one. Travelling across the globe to a place we’d only seen in movies and (let’s be honest now) Google Earth, not knowing anyone and then, in the space of four days, making amazing acquaintances, we gathered fantastic everlasting memories. Meeting each and every one of the contestants was amazing. We might not speak the same language, but we all were on the same frequency. Sharing our culture with them and getting to know theirs was quite exciting. It was surely a learning experience for all of us, musically as well as personally. We thank Red Bull wholeheartedly for giving us the chance to explore our abilities and we hope to see more of these events in the future.