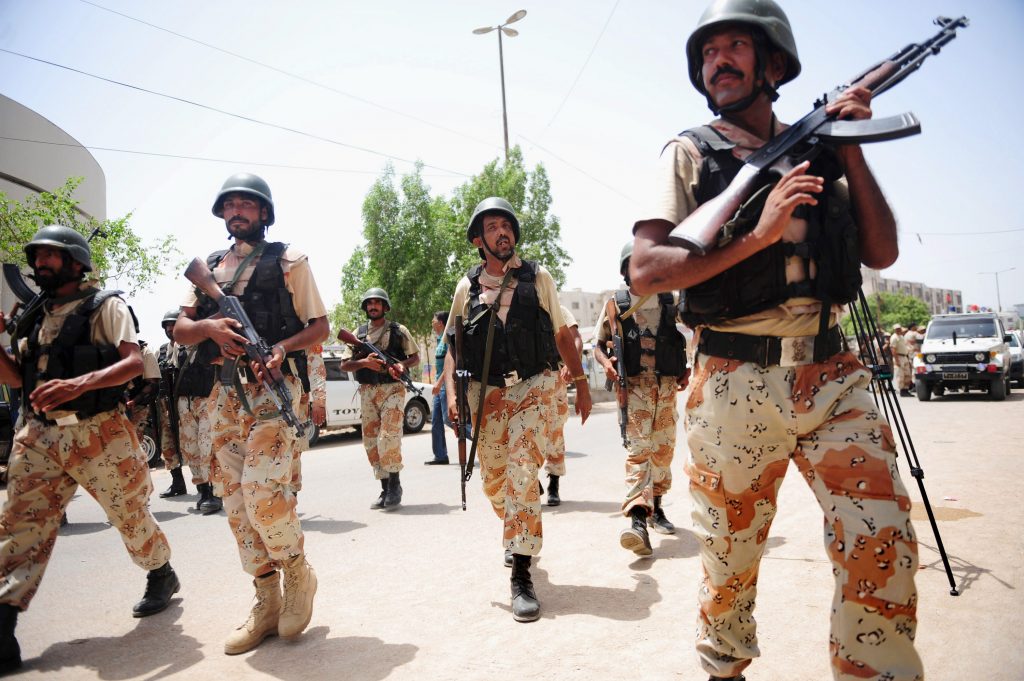 September marks the third year of the surgical operation in Karachi. The operation has been led by the paramilitary force, the Rangers, and aided by the Karachi Police. At the end of August, the Rangers issued a statement giving details of the arrests made in the last three years. According to the statement, 848 target killers were arrested in targeted raids conducted from September 2013 onwards. Among the 848 arrested, 654 belonged to the militant wing of a political party and 95 were afiliated to the criminal gangs of Lyari, while 99 target killers belonged to assorted banned organisations. “Those arrested have confessed to their involvement in the target killings,” the statement claims.

Prior to this, in a briefing to the Senate committee at the end of July, the Rangers provided details of the operation. Colonel Qaiser Ajmal Khattak, spokesperson for the Sindh Rangers, shared that 7,950 operations were conducted in the city and around 6,500 people were arrested. After the arrests, 6,361 of them were handed to the police and 221 to the Federal Investigation Agency (FIA) and other law enforcement agencies. Among those arrested by the Rangers, 1,236 were terrorists, including 848 target killers, 403 of them were extortionists and 143 were involved in kidnappings for ransom. Providing further details on the targeted raids, Colonel Qaiser said that 1,313 raids were conducted against the Muttahida Qaumi Movement (MQM), 1,035 against the banned People’s Aman Committee (PAC) and 28 against the Awami National Party (ANP). Incidentally 478 of the arrests were made from other parts of Sindh.

Among those arrested, 5,518 were released without registration of any First Information Report (FIR) against them, whereas 1,313 were released on bail and 188 were sentenced by the courts.

Talking about the end result of the surgical operation, the Rangers spokesperson claimed that the operation had helped improve the law and order situation significantly in Karachi. Terrorist activities, he said, had gone down by 80 per cent, target killings by 75 per cent, extortion complaints by 85 per cent and reports of kidnapping for ransom by 83 per cent.

Colonel Qaiser did not forget to mention that as a consequence of the improved law and order situation, economic activity in the city had risen, and the people of Karachi had, in fact, spent around Rs 5 billion on purchasing flags and buntings to celebrate Independence Day this year. 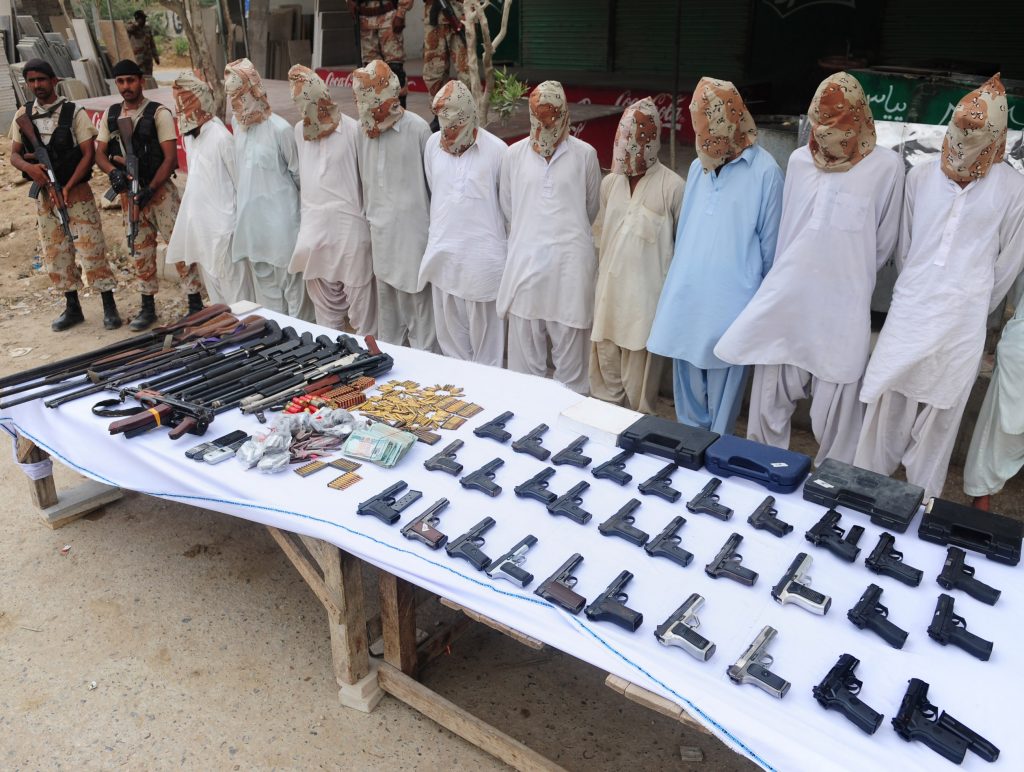 Traders and members of the business community are extremely vocal in endorsing the claims made by the Rangers spokesperson. They credit the Rangers for the drastic fall in extortion demands and the frequent calls for shutter-downs.

Traders and businessmen have borne the brunt of the years of mayhem and chaos in the country’s economic lifeline. The city has been in the throes of increasing levels of violence and crime. The situation was compounded by the sheer complexity of the causes, which include political rivalries, gang wars, religious and ethnicity-based target killings, as well as the presence of multiple factions of banned terrorist groups, including the Tehrik-e-Taliban Pakistan (TTP) and its affiliates like Jundullah and Lashkar-e-Jhangvi (LeJ).

Sultan Ali, owner of a shop in a market adjacent to Kharadar, an area which was one of the worst affected areas recalls those turbulent days: “Criminal gangs were let loose to intimidate traders and businessmen and extort hefty amounts from them.”

Gangs of the PAC had pushed out the MQM from the old city areas’ market places. The PAC were collecting the extortion money and settling disputes between the traders, most likely in favour of those who had approached them or had offered the highest share to them in case of settlement of the dispute. As for the inhabitants of the old city’s residential localities, they were not safe even in their own homes.

“Eid-ul-Azha is round the corner and people have already started buying sacrificial animals. I am reminded of those days, when we would receive calls from members of the PAC gangs, demanding bhatta that was equivalent to the amount we had paid for a sacrificial animal. Those of us who refused to pay were attacked or the animals that we had bought were shot dead,” revealed Sultan Ali. “But now that the Rangers are in charge, the fear seems to have somewhat abated.”

Earlier, people living on the outskirts of the city, in the informal settlements, sought the help of political parties or religious groups in the event of trouble. Not so anymore. Last year, I visited the home of an acid attack survivor, a single mother of a five-year-old, living in a poor slum in Karachi’s Baldia Town locality, with her widowed mother and sisters. 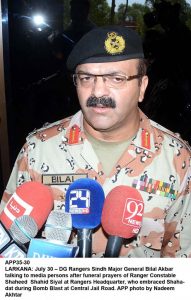 The man who had assaulted her was behind bars, but his family was threatening and pressurising her to reach a compromise. In fact, late one night, when they were out for a family gathering, someone broke into their house. They believe it was an attempt to scare them. People in the neighbourhood were wondering if she should seek the help of the local MQM unit office. “Talk to someone from the Rangers instead,” suggested one of them. “A single round of a Rangers patrol vehicle will make everything okay.”

Rangers are increasingly being seen as a quick-fix solution to the problems of intimidation and illegal use of force. Their help is being sought by the public in other problem areas as well.

Maulana Zainuddin, a local leader of the JUI-F and a contestant in the recent local bodies elections, spoke to a Rangers official about the water shortage in his locality — the Ghaus Nagar neighbourhood in Baldia Town — and asked for water tankers. “The PPP and the MQM wield considerable influence on the Karachi Water Board, and consequently it discriminates against localities based on their ethnicity,” he alleged. “The Rangers knew I was asking for water for the people, and not because I wanted to sell it. Their commandant assured me of his support and soon we started getting 12,000 gallons of water every day.”

Interestingly, the Rangers are being expected to perform miracles — and not just by the common man. Last year in August, when Amir Haider Shah, former joint secretary of the Karachi Bar Association (KBA), was killed by unknown assailants, the lawyers did not approach the PPP government, but instead chose to demonstrate outside the Rangers headquarters, and continued with their protests until they were allowed to meet the Rangers’ director-general. According to reports appearing in the media, the delegation that met the DG assured him that lawyers would not defend any target-killing suspects arrested by the Rangers. KBA President Naeem Qureshi, though, later clarified that the assurance pertained only to cases related to the assassination of lawyers.

The traders, the business community, the lawyers and the common citizen may view the Rangers as the go-to force for assorted law and order problems, but Sindh’s two leading parties would like to see the back of them.

The MQM had welcomed the arrival of the Rangers in Karachi initially, but when the paramilitary force came down with a heavy hand on them and proceeded to arrest several party workers, the MQM cried “foul” against what it saw as a one-sided operation against them.

The PPP too turned against them following the arrest of Asif Zardari’s crony Dr. Asim Hussain, the raids on the offices of the Karachi Building Control Authority and the seizure of files to investigate the land grabbing mafia allegedly linked to PPP stalwarts.

Of late, the PPP leadership has been extremely reticent to grant the Rangers any further extensions in their power or tenure. It has only been due to extreme pressure from the GHQ that they agreed to this latest extension — and that too is limited only to Karachi, and excludes Sindh from their mandate, much to the army’s displeasure. What lies in store when the next deadline for the Rangers’ presence in Karachi expires, remain to be seen.

But Karachi’s common citizens and its business community are not complaining.