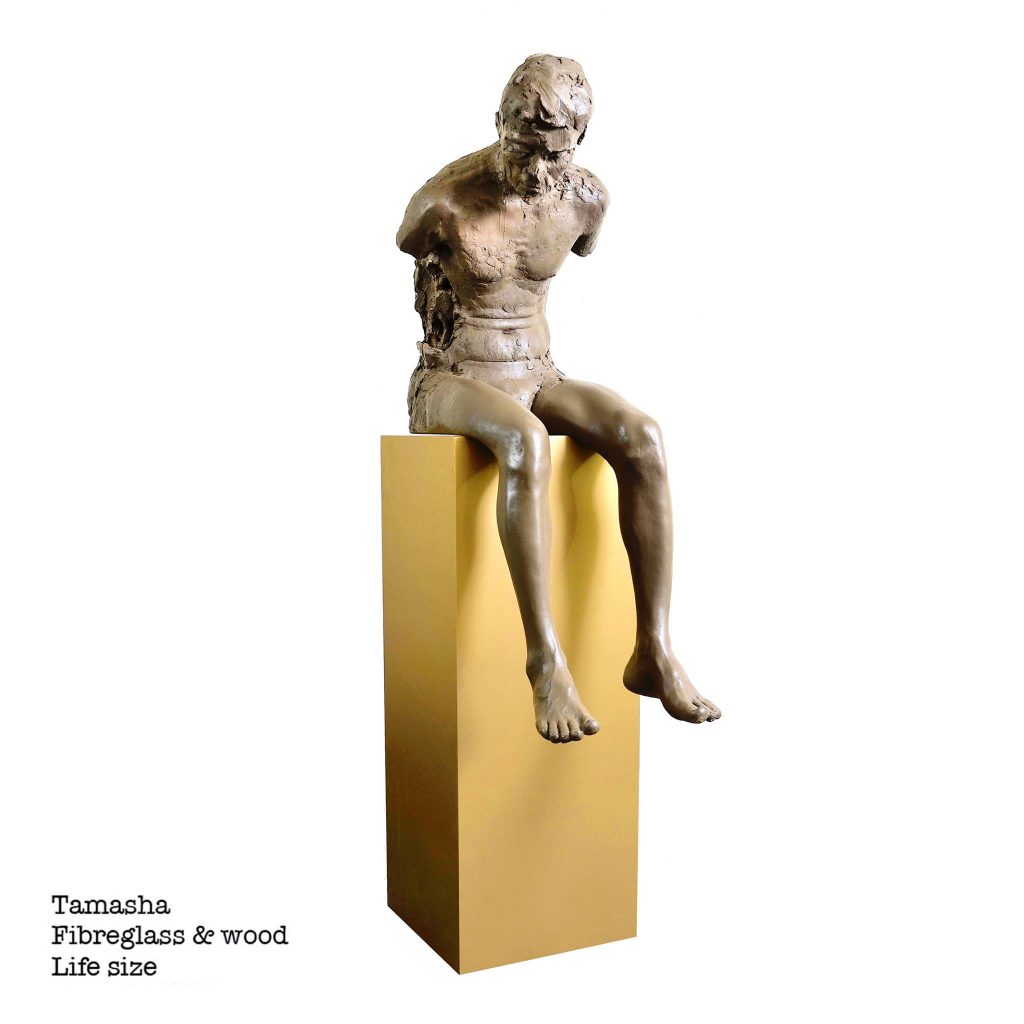 This is art empowered with energy from the dark side. It invokes subterranean forces that reach into the depths of a Hadean underworld, and re-emerge into the light crafted as art that is infused with the chill of post-mortal recollection.

Saud Baloch is from Balochistan. He received his training at the National College of Arts in Lahore. This is his second show in two years at Sanat Gallery, which has done well to showcase his talent once again. The title of the show — `Under the Dust’ — is a phrase he borrows from Habib Jalib’s poem Tum se Pehle. The sentiment within the poem, remonstrating loss, also features strongly in Saud’s sculptures and drawings included in this show which has been curated by Madeline Amelia Clements. 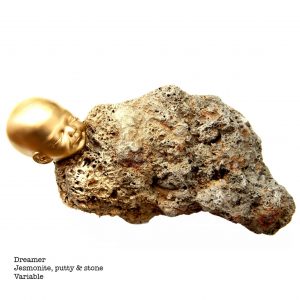 The human body is paramount in Saud’s work, as a vehicle for life and subsequent decay. Saud has created a series of drawings with archival ink on paper called ‘Life Masks.’ These drawings are meticulous creations that take approximately three weeks to finish. Tiny spheres are used as building blocks to create the image. From this intricate assemblage, emerge sepulchral portraits of skulls and torsos that have lost corporeality. The images float on a white background. Their perforated surfaces resemble the chainmail armour worn by medieval soldiers but the texture is more like fabric than metal. The “fabric” holds the shape of the body, but is a ghostly shell from which inner solidity has disappeared. The drawings in ‘Life Masks’ are paradoxically about the absence of the body (and therefore life), whose shape they hold onto in tattered shreds. 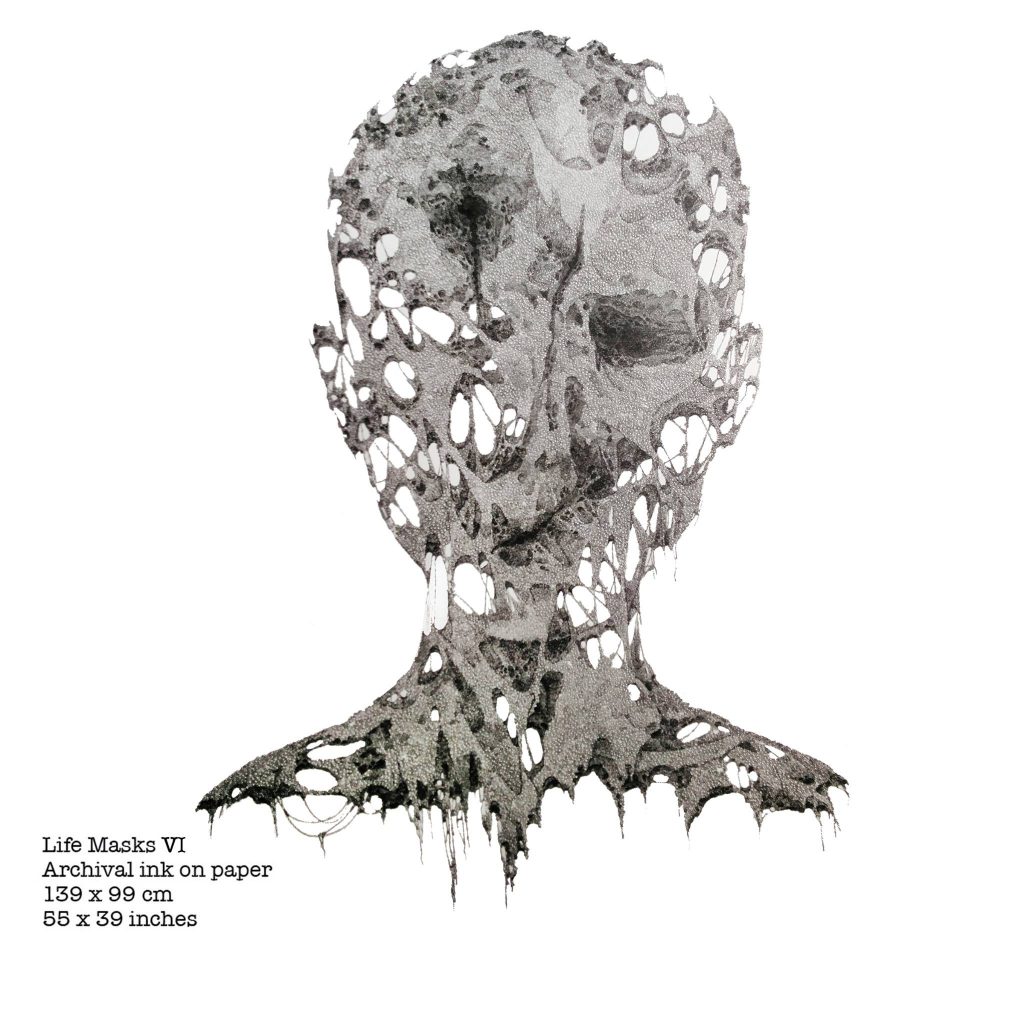 The spherical shape with which Saud creates his body fabric drawings is a recurring element in his expression. It bears reference to the loose weave of the jute bag which is used to dump bodies. Saud’s predisposition towards biomorphic forms links his drawings to his sculpture of the human body. There are two kinds of sculpture on view in `Under the Dust’ — stone and fiberglass. They differ in size but have thematic connections with one another and with the drawings. 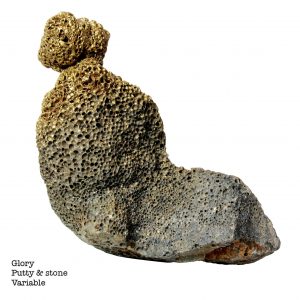 Saud has selected stones with circular perforated surfaces that correspond to his hand-drawn spheres. These are exhibited on pedestals in order to be viewed from several sides. The stones are treated with putty, jesmonite and gold paint to extract the biomorphic shape from the mineral mass. There are a couple of infants. One titled ‘Dreamer’ smiles in sleep, swaddled in its stony blanket. The other infant seems dead. There is such pathos in the shape of his distended lip. One mourns the lost potential of an individual life that has been terminated. In ‘Glory,’ a head cranes upwards in hope or despair. There is ambiguity and mystery suggested here. The value of glory is by no means certain.

In contrast to the small-scale stone pieces, the fiberglass figures are life-sized and life-like in detail. They resemble ancient Greek sculpture in their muscular monumentality. Their surface is finished in resin which resembles mud. These figures could equally have arisen from the earth just as they will be interred within it. The sculpture titled ‘Badshah’ shows an upright child with bowed head wearing a gilt crown that looks tawdry in contrast to the muddy skin. There are sections on the boy’s body which look unfinished and rough, as if to suggest necrotic skin and decay. 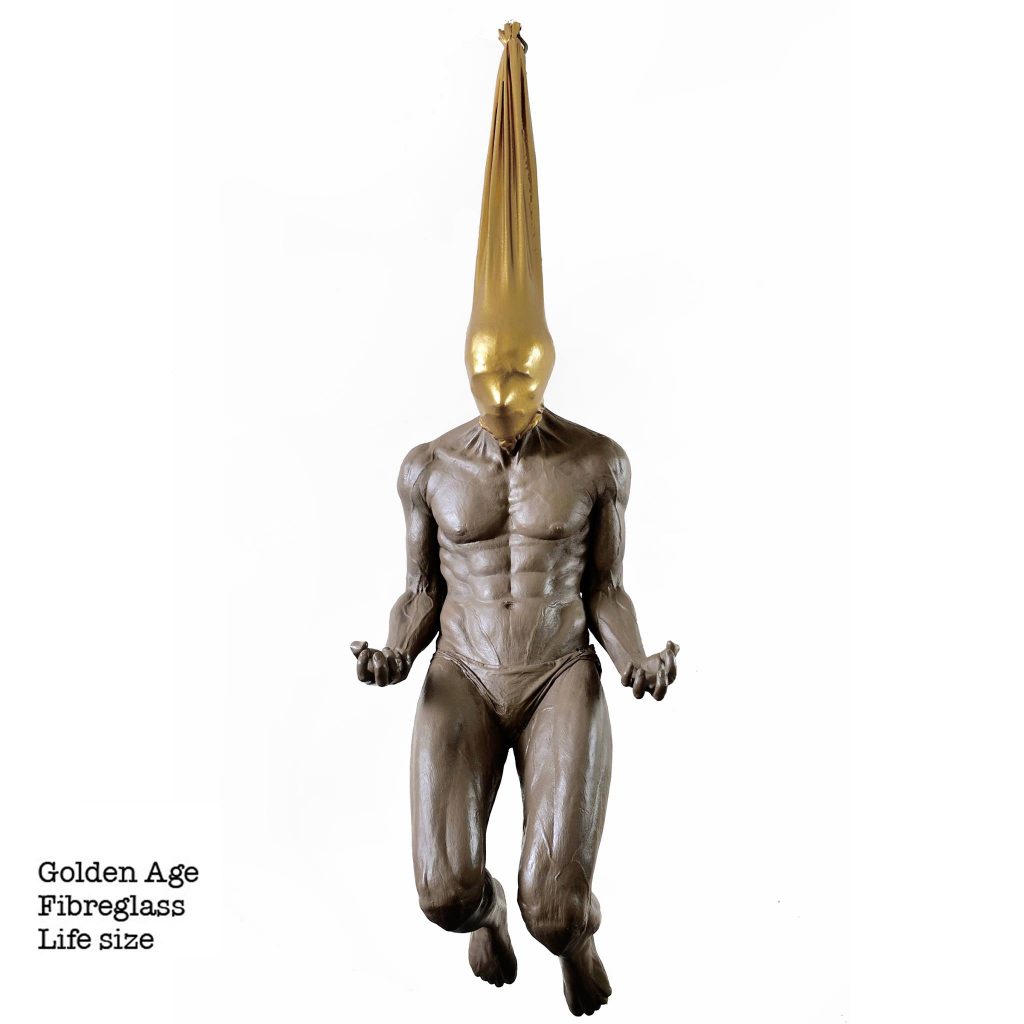 The most potent sculpture is ‘Golden Age.’ A beautiful male body is suspended from the ceiling by an elongated sack, which hoods the face and simultaneously supports the weight of the sculpture. The contrapuntal posture created by arms and legs bent at right angles, generates a tremendous dynamic of power and energy. The hood/sack may mask identity but there is no doubt this anonymous man represents resistance against oppression.

There is a strong political narrative in this collection of work. Notions of absence and resurgence are dramatised in the porous depictions of the body in the drawings and the contrasting solid depictions in the sculpture. The thematic content is extremely mature. Despite the preoccupation with morbidity, the beauty of Saud Baloch’s work stays in the mind of the viewer for a long time. Like Persephone, we are driven into the chasm of the underworld on Hades’ chariot with its jet black horses.