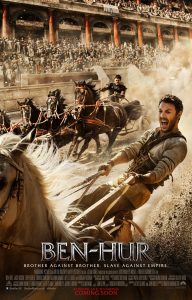 One of the most memorable things about William Wyler’s enormously successful 1959 film, Ben Hur, is the spectacular chariot race that takes place towards the end of the film. Employing dangerous stunts, clever shooting angles and computer-generated images, director Timur Bekmambetov restages the iconic race in his 2016 film of the same name.

Lew Wallace’s 1880 novel, Ben-Hur: A Tale of the Christ, has been made into five feature films and one television series. And the signature sequence in all Ben Hur movies — the chariot race — falls flat in Bekmambetov’s movie for a number of reasons. One, cinematographer Oliver Wood shoots most of the race in close-up and medium shots, and with a shaky camera. The dearth of long, sweeping shots ensures that the sequence does not inspire awe. Two, choppy, almost frenetic, editing makes the action decidedly confusing and occasionally, incomprehensible. Three, the sequence does not have requisite dramatic gravitas and emotional pull. The underlying drama needed to make the sequence effective is completely missing. And that is the problem not just with this sequence but with the entire film.

Ben Hur tells a powerful, if somewhat schlocky, tale of revenge, redemption and forgiveness. The story can work only in a passionate and graceful film with richly developed characters. Bekmambetov’s is not that film; it has more spectacle than drama, and more didacticism than entertainment. Bekmambetov has stripped the story of most, if not all, drama and passion. He has cast the wrong actors in important roles. Keith R. Clarke and John Ridley’s bland screenplay and Bekmambetov’s inept direction are unable help actors who lack the necessary heft and charisma, in the first place. They turn in disinterested performances that fail to move or impress. The result is a stodgy adaptation of a novel that has been the source of a number of highly successful films.

Ben Hur takes place during the time of Jesus Christ. Judah Ben-Hur (Jack Huston) is a Jewish prince leading a luxurious life in Jerusalem with his mother, Naomi Ben -Hur (Ayelet Zurer), his sister, Tirzah Ben-Hur (Sofia Black-D’Elia), and slave girl, Esther (Nazanin Boniadi), whom he loves and eventually marries. He enjoys a close friendship with his adopted brother, Messala Severus (Toby Kebbell), who flirts with Tirzah when not spending time racing horses with Judah. A follower of a different faith, Messala feels out of place in his adoptive home and leaves it to go and join the Roman legions. Years later, when Prefect Pontius Pilate (Pilou Asbaek) becomes the ruler of Judea, Messala returns to Jerusalem to find that freedom-fighting Jewish zealots, inspired by a carpenter named Jesus Christ (Rodrigo Santoro), have become a major force in occupied Jerusalem. The two friends – Judah and Messala – disagree on how to handle the zealots and rule the city. Things come to a head when a zealot that Judah has been sheltering almost kills Pontius Pilate, forcing Messala to punish Judah by condemning him to work as a slave on a Roman galley. After spending five years on the ship, Judah becomes the lone survivor of a ferocious naval battle with the Greeks in the Ionian Sea. He washes up on a beach, where he is rescued by an African trader named Sheik Ilderim (Morgan Freeman), who likes to bet on chariot races. Taking notice of his facility as a horseman, Ilderim trains Judah as a racer and engineers an opportunity for him to avenge himself by beating Messala in a high-profile chariot race.

William Wyler’s film added a homoerotic subtext to the original story in order to make the intense hatred between Judah and Messala believable: the 1959 film suggested that the bitterness between the two men was the result of a lovers’ tiff. The provocative idea is missing from the 2016 film probably because they were very obviously targeting conservative Christians as the potential audience. The neutering of the principal characters of Ben Hur makes the film’s central relationship dull and boring.

In fact, in its blatant desire to court faithful Christian filmgoers, Ben Hur gives the Christianity element of the story undue prominence and forces cheesy religious platitudes down viewers’ throats. Without a doubt, Judah Ben Hur’s message of love, tolerance and forgiveness is timely and relevant, but its ham-fisted delivery in Ben Hur makes it as ineffective and off-putting as the film itself.