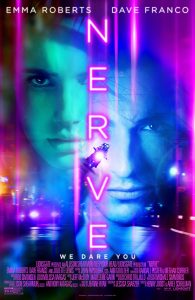 Jeanne Ryan’s bestselling novel, Nerve, could have been made into a good film in one of two ways. One, it could have been made as a cautionary tale of the dark, dangerous depths of the internet, the perils of recklessly seeking fame through social media, and the hazards of getting sucked into online games that promise easy financial rewards.

Two, it could have been an insightful film about high school politics where the clique of good-looking, fashionable and popular students enjoys teenage life to its fullest and counts on being bailed out of trouble, exams and much else by the same studious, plain and nerdy set which it treats with exclusionary disdain in happy times.

However, Henry Joost and Ariel Schulman chose to make a different film altogether, one that is not great, but entertaining and engaging, nonetheless. It makes up in flash, style and glitz what it lacks in substance, intelligence and insight.

The titular game of Nerve divides people into two groups: players and watchers. The players compete for money and popularity by taking on daring challenges thrown at them by the watchers. The challenges start off as innocent and innocuous dares but progressively become riskier and more dangerous over a period of 24 hours. The players of Nerve find fame and fortune through the game but the rewards for the watchers, too, are plentiful. They control the game from the sidelines by choosing to follow specific players, devising interesting and dangerous dares, and offering financial bounties. They enjoy having players act out their hidden desires, on command, and in a manner that affords a more real-life experience than online voyeurism.

The shy and risk-averse Staten Island high-school senior, Venus Delmonico (Emma Roberts), decides to join Nerve as a player to add thrill to her sedate life, after constantly being pushed to enjoy life, by her best friend, Sydney (Emily Meade). Her first dare requires her to kiss a stranger in public. The stranger ends up being another player, Ian (Dave Franco), whom she kisses, with unlikely expertise, in a diner. The encounter is instantaneously popular with watchers who dare the two to venture together into New York city, try on clothes at the posh Bergdorf Goodman store, and drive a motorcycle at high speed down a Manhattan road while blindfolded. Popularity and financial rewards escalate in tandem with the danger and deadliness of the dares, as the movie heads towards a rousing, if unsatisfying, conclusion.

Nerve would have been an ordinary, run-of-the-mill summer movie, had it not been for four areas of strengths — performances, production design, cinematography and screenplay.

Winsome, beautiful and talented, Roberts and Franco have tremendous onscreen presence and chemistry. The two heretofore underrated actors are convincing and credible as a couple whose relationship evolves from familiarity to friendship and finally to love, in a very short span of time. Their understated portrayal of growing love is masterful. The two are outdone only by Colson Baker, as fellow player Ty, and Meade, who epitomise twenty-first century teenagers who seek fame, fortune, thrills and a lot more on the internet, with unbelievably crazy ferocity.

Jessican Sharzer’s screenplay is adroit and nimble. She uses internet and technology jargon capably to realise the climax of Nerve. More importantly, she demonstrates the dynamics of the world of teenagers with extraordinary finesse and understanding. The screenplay allows Nerve to explore the relationship between Venus and Sydney with remarkable delicacy and create a few poignant moments of genuine affection between Venus and Ian.

Nerve, of course, has its faults — for one, a climax that gets resolved far too easily and far too quickly — but it is way too entertaining and engaging to be dismissed as an average summer flick. If for nothing else, it should be seen for the wonderfully executed sequence in which Roberts and Franco escape Bergdorf Goodman in nothing but their undergarments and shoes.