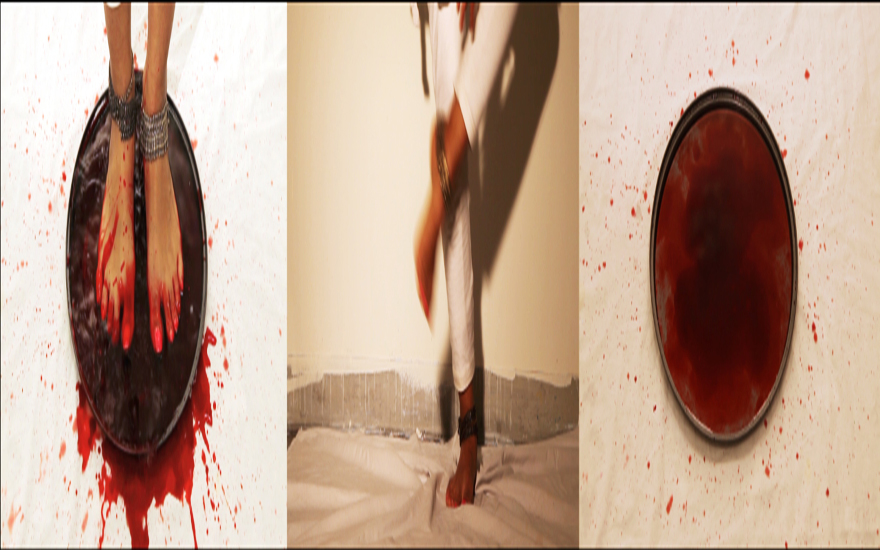 In his academic tour de force Orientalism, Edward Said defined ‘orientalism’ as a distorted lens through which the western world observed and documented the cultures of the Middle East, Asia and Africa. This lens, under the posture of objectivity, reduced the peoples of the East into crude stereotypes or fantasies, frozen in time, rather than as evolving, contradictory and multidimensional human beings.

And it is this lens that artist Sausan Saulat attempts to dismantle in her exhibition titled This, That and the Other at the Koel Gallery. And that too in her own style, which she defines as “comical, confrontational and somewhat defiant.” Saulat’s works — consisting of oil paintings, multimedia, digital prints, video clips and jewellery installations — are a personal commentary on her own identity and the baggage it carries in a post 9/11 world. Having spent three years in the United States for her masters degree, Saulat felt she was confronted (and confined) by present-day, orientalist attitudes and, as a Pakistani, Muslim woman, was expected to take on certain issues in her artworks — violence, terrorism and female subjugation.

With This, That and the Other, Saulat does take those issues head-on, just not in the way her peers in the United States would have expected.

Instead of criticising dominant western perceptions in a serious or politically charged manner, Saulat mocks them by depicting them in absurd and humorous ways. For example, in ‘Dirty Laundry,’ a video of a woman’s face is projected on to a vertically positioned ironing stand, which ends up resembling a burqa-clad figure. A second video projection, of everyday news clippings of violence and mayhem (as well as a shot of Prince William and Kate Middleton’s wedding, which may seem slightly out of place at first, but makes sense within the overarching theme of colonialism) plays inside the silhouette of an iron. The burqa is an item of clothing that, at least in the eyes of most westerners, automatically brings ideas of female subjugation to mind, and the news clippings present a backdrop to the world the woman is perceived to inhabit. But instead of appearing demure or depressed, the woman stares confrontationally at onlookers, speaks and occasionally smirks. The woman has an identity and voice and can speak for herself, if we choose to listen.

The installation, though humorous (“It’s an ironing board, it can’t possibly be taken seriously!”), gives a sense of how the artist could not relate to the perceptions of what a Muslim woman should look and dress like, and the difference between her own world and the world depicted in the news on a daily basis. Video installations are a particularly interesting medium to use, as they convey a sense of movement and change, as opposed to the subject being static and stuck in time.

Keeping in mind that the artist is documenting her own experiences, the collection is highly self-referential and Saulat often places herself in many of her own works. For instance, ‘To Love is To Let Go,’ a four minute film screened inside a suitcase — a clever play on the term ‘baggage,’ and a sense of homelessness — shows the artist tossing and turning in bed, struggling to attain peace of mind. Unable to rest, she goes about watching television, reading a book and fixing herself a snack. A newsreel (the same as the one in ‘Dirty Laundry’) plays in the backdrop. So, while the artist is going about ordinary, mundane activities, a sense of panic and alarm about her home country is always present at the back of her mind.

In another video clip titled ‘B Positive: Yves Klien Red,’ only the artist’s bare feet, graced by anklets, can be seen as she steps into a pool of blood and dances on a white cloth. The anklets, hennaed toes and churidaar are symbolic of South Asian femininity, yet the presence of blood gives it a macabre touch. Perhaps Saulat felt she had to ‘perform’ a set role to conform to the expectations of others, yet lacked a face and identity of her own.

‘Self Po(o)rtrait’ is a four-part oil on canvas series which showcases the artist against a black and grey pattern. The four paintings are placed next to each other, and with each consecutive one, her face merges more and more into the pattern, until only a silhouette is left: the artist’s identity gets lost in the identity constructed for her by others, and she becomes alienated from herself.

The collection is certainly unique, and Saulat’s ability to take on serious issues without taking herself too seriously is refreshing.