Every year, on Pakistan’s Defence Day on September 6, the Pakistan army, ostensibly the only organised institution in the country, would demonstrate its might by holding a parade for the public. But it’s been over a decade now that they have abandoned this ritual, following terrorist threats. Interestingly, this tradition is being kept alive by our jihadi outfits!

For the last five years, Pakistan’s militant outfits have been holding a parade every September 6. They demonstrate their might (and their firepower) by brandishing Kalashnikovs and making fiery speeches challenging their three perceived enemies: India, the US/West and Israel.

These jihadi outfits block the main highways, crippling citizens’ lives, as they hold rallies from one end of the city to the other. And what’s more, they are fully facilitated in this by the local administration. In fact, September 6 is declared a public holiday by the government.

This year too, the men in khaki were replaced by militants in black — the self-proclaimed mujahideen of Islam belonging to the Jamaatud Dawa, which has been branded a terrorist outfit by the international community for masterminding the Mumbai carnage in 2008. Their head honcho, Hafiz Saeed, carries a bounty of $10 million. His followers had come in thousands for the rally. Many of them had arrived in Pindi from Azad Kashmir the night before. Hundreds of Dawa’s own guards were deployed to body search the participants. The rally was held in the name of ‘Defence of Pakistan.’ It started from Liaquat Bagh and culminated at D-Chowk, in front of the parliament.
Dawa’s caravan consisted of more than 10,000 vehicles, according to its spokes person, Asif Khurshid. Hundreds of policemen from the twin city provided security to it. As usual, Saeed delivered a fiery speech at D-Chowk, spitting venom against India, and cursing the US/West and Israel. His followers listened to him with rapt attention. Nobody countered his usual provocative gibberish: we will crush India; we will hoist the flag of Islam in Delhi; the US has disintegrated; the mujahideen will soon rule India, etc.

Shockingly enough, this absurd spectacle was given unprecedented coverage by the electronic media. More than a hundred video cameras of assorted private TV channels were in attendance. Ostensibly, neither the owners nor the management have any issue with airing such provocative hate speeches. And interestingly, neither does Hafiz Saeed have any hesitation about being on camera. Just eight years back, Saeed had declared that he would not allow the media to photograph him because it was haram in Islam. So what was haram until yesterday has become halal today! Now Saeed is so in love with his voice and face that he never loses an opportunity to be on camera. Journalists like me now know the content of his speeches by heart. It never changes. Whether he is addressing his audiences on the occasion of a flood, an earthquake, Kashmir Day or a jihadi rally, Hafiz Saeed harps on the same old themes: curse India/US/West and Israel and tell the audiences that all of them are close to disintegration. Really?

Rallies like these do no service to Islam or this country, except for causing chaos. If anything, they lead to more Pakistan-bashing by the international community. And yet, it is also a fact that such rallies of such magnitude cannot be organised without state patronage. Has the state gone insane? What message does it want to send across the world? That the job of the country’s defence has been outsourced to some militant outfits.

Chief Justice Chaudhary has taken suo moto action on every issue under the sun. Why can’t he take action on one more issue and declare that such rallies be banned? 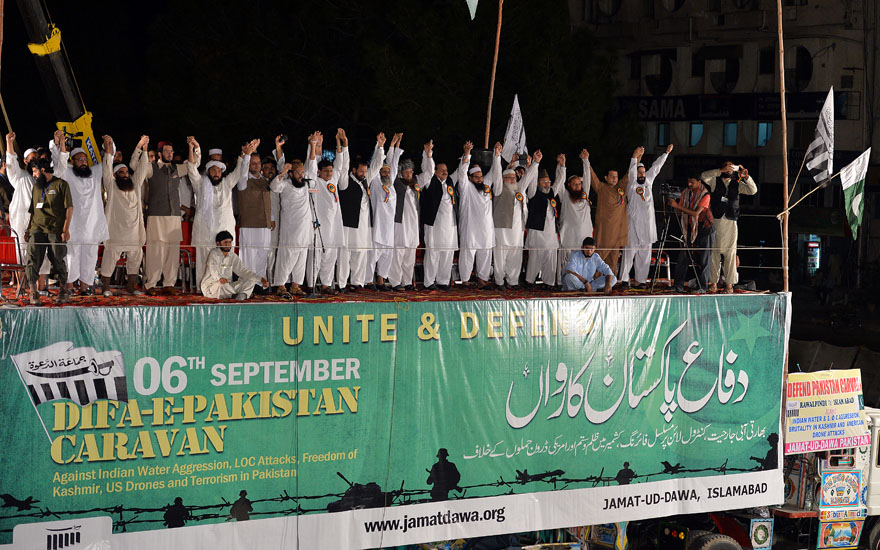 Unfortunately, there are certain elements within the Pakistan Army who still view the Taliban as assets. The army has not learnt any lessons. And there is a clear and present danger that an outfit like Jamaatud Dawa, which has followers in hundreds of thousands, may prove to be yet another Frankenstein like the Taliban.

The country’s policymakers are quite naÃ¯ve if they think they can intimidate India, Israel, US and the West by sponsoring such rallies. The army’s bleed-India policy, that was authored by shortsighted generals like Hamid Gul and Aslam Beg, has boomeranged. The fact is, Pakistan itself is bleeding now — and it is bleeding badly. Its obsession to conquer Kashmir and to seek strategic depth in Afghanistan has resulted in the creation of hydra-headed monsters like the Taliban who have killed more than 40,000 innocent citizens including 7,000 security personnel. On September 15, the Taliban killed a major general, a lieutenant colonel and a lance naik in a roadside bomb blast in Swat. The three were killed at a time when the government was discussing the modalities of conducting peace talks with the Taliban. The Taliban defended their action by saying that they had killed the major general because the talks had not yet begun and that they would continue to target security personnel.

Unfortunately, there are certain elements within the Pakistan Army who still view the Taliban as assets. The army has not learnt any lessons. And there is a clear and present danger that an outfit like Jamaatud Dawa, which has followers in hundreds of thousands, may prove to be yet another Frankenstein like the Taliban. They have the case of the Lashkar-e-Jhangvi [LJ] before them. LJ came into being under the patronage of the military dictator, Zia-ul-Haq, to counter Iran’s influence in the country. Today, LJ is the number one ally of the Al-Qaeda. It is openly claiming responsibility for carrying out blasts, suicide attacks and target killings against the country’s Shia Muslims. By giving a freehand to a deadly outfit like the Jamaatud Dawa, the policymakers are simply just repeating their old mistakes and the results won’t be any different this time round!