It has been one year since 255 people burned to death in the worst industrial fire in Pakistan’s history. On 11 September 2012, a terrible fire engulfed the Ali Enterprises garment factory in Baldia Town, Karachi. Investigations into the incident revealed the deplorable working conditions in the factory that led to such a high death toll — the building was found to have been extremely overcrowded, and most of the exits were blocked, trapping people as they burned alive. The devastating tragedy exposed a flawed, corrupt and inefficient system which forced workers to earn their living in inhuman working conditions, while other stakeholders — factory owners, multi-national buyers and government departments — reaped the benefits. Now, as grieving family members of the deceased mark the one-year anniversary of the terrible incident, important questions must be raised: Are the factory owners and other culprits paying for their criminal negligence? Have the families of victims been compensated for their loss? Has this incident served as a catalyst to change a system that is so flawed, or have we brushed it aside as just another one in a slew of tragedies that strike our country, every now and then?

In a seminar organised by the Pakistan Institute of Labour Education and Research (PILER) to mark the first anniversary of the factory fire, which was attended by family members of the deceased, important developments pertaining to the case were discussed. The two most urgent issues that came up were those of compensation and of legal action against the culprits. According to senior lawyer Faisal Siddiqui, who has been working on the case this past year, the injured and the families of the victims are entitled to monetary compensation from different stakeholders, including the state, the factory owners and the buyers of the factory products. In addition, death grants have to be paid to the victims’ families by the Workers Welfare Fund (WWF) and the Employees Old-age Benefit Institution (EOBI), and the Social Security Institution of Sindh (SSIS) has to provide pension to the injured and the victims’ heirs.

After the fire, the government claimed to have given RS 85 million as compensation to the families of the victims. “To check this claim, and make sure that all families did, in fact, receive this compensation, a Sindh High Court Commission was formed,” explained Siddiqui. The Commission first had to compile an authenticated list of all the employees of the factory and of the deceased and injured — a harrowing process, as many of the bodies were hard to identify. “It took us six months just to hold funerals for those whose remains could not be identified,” Siddiqui added. The funerals too had to be conducted through this commission, as the state proved to be too inept even to perform this basic of functions.

Meanwhile, following sustained public pressure KiK, the German retailer which was a big buyer of the Ali Enterprises garment factory, signed a Memorandum of Understanding (MoU) with PILER, in which they agreed to pay one million US dollars in emergency relief. Most of this has now been distributed to the families through the SHC Commission. Siddiqui assured the victims’ families that this amount is not the full payment, and according to the MoU, is just the first instalment of a long-term compensation. In contrast to this positive development, many family members complained of non-payment of the pension that they are entitled to from EOBI and SSIS. “Social security grants only Rs 700 per month as pension, which is shameful,” remarked Israr, a representative of the victims’ families. “And even that is not being provided to everyone.” And while pension is supposed to be for a lifetime, EOBI is refusing to pay beyond five years.

Present in the audience, was the mother of a 10-year-old boy, who said that, despite her son being an employee of the factory, she is being refused payment on the grounds that her son is too young to qualify for pension. Many also mentioned Prime Minister Nawaz Sharif’s announcement in 2012 that he would donate RS 300,000 to the families — an amount that has not been heard of since. However, Zulfiqar Shah, Joint Director of PILER, assured workers’ families that they would take up all these concerns with the government. PILER has recently established the Pakistan Centre for Constitutional and Human Rights which will receive complaints of families in this regard. “We will not stop until every single person who was affected gets some justice,” said Shah.

As far as legal action against the culprits is concerned, they explained that the case against the factory owners — Abdul Aziz Bhaila, Rashid Aziz and Shahid Aziz — is still going on, despite the controversial statement made by the then prime minister, Raja Pervez Ashraf, in which he had asked the police to withdraw the murder charges. “We must fight this culture of which is so damaging to our society,” said Shah. On the international front, due to lobbying by various organisations as well as public pressure, a group of European lawyers are preparing a lawsuit against RINA, the Italian audit company contracted by the Social Accountability International, which issued an SA8000 certificate to the factory weeks before the fire, declaring that the factory met international labour standards and local laws, including fire and building safety. 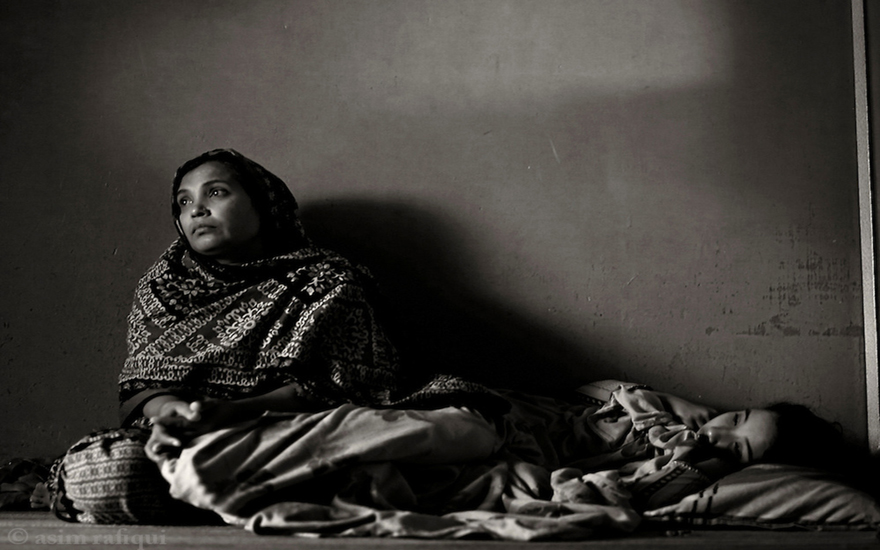 Nawaz Sharif announced in 2012 that he would donate RS 300,000 to the families — an amount that has not been heard of since. However, Zulfiqar Shah, Joint Director of PILER, assured workers’ families that they would take up all these concerns with the government. PILER has recently established the Pakistan Centre for Constitutional and Human Rights which will receive complaints of families in this regard. “We will not stop until every single person who was affected gets some justice,” said Shah.

Both Siddiqui and Shah acknowledged that there was, and still is, immense pressure from various factions to make this case go away without the culprits having to face the consequences. “Industrialists know that if justice is served in this case, they might not be able to go scot-free the next time something happens in one of their factories,” said Shah. “But we must persevere. We have to turn our pain into our strength.” Getting justice is surely going to be an uphill climb. Siddiqui implored the families of victims to continue fighting and not to give up. “This is not something which can be fixed in a year or even five. This is a long battle which will take decades. But we must continue fighting, we must not forget,” he said. “If we forget, it is guaranteed that something like this will happen again.”