The camel must be a coward, remarked a villager in Thar upon observing the ritual of branding taking place in the village, and hearing the stricken groans of the herds. After all, how was it possible that such a huge animal could not bear the pain of a tiny burn? Crowds of spectators were amusing themselves at the scene, passing derogatory remarks over the bleating animals. The scene was telling — it was indicative of the unfeeling attitude shown to animals by their masters in Pakistan. Research in neurology sciences has proved that mammals have a fully developed nervous system and that they can feel pain like human beings. Also, they can respond to pain and pleasure by crying, blinking and through various other means beyond our comprehension. But how far is their pain paid heed to by their owners?

Not much, the evidence of branding would suggest. The act smacks of cruelty. However, the good news is that this practice, used by herders to distinguish animals belonging to one community from another, is in decline, which seems like good news for the animals.

Branding is a particularily brutal practice: First, an expert in affixing codes from the village or nearby is identified. In the case of camel coding, the owner first tames the camel to sit down, then quickly ties a rope around its bent front legs. Meanwhile, the man who will brand the animal heats the iron rod, which has a coded design affixed to it, in a fire made from dung, dry twigs and bush leaves. The burning process is quickened by propelling oxygen into fire, and sometimes by using kerosene oil. When the rod is red-hot, the owner and the brander converse and confirm timing through hand-signals. After that, the coding expert hurriedly takes the rod from the fire and, quickly yet firmly, fixes it on the neck of the camel. The usual spot for cows is, however, the rear flank. When the rod is removed, water is poured on the stamped code. This step aims to get the burn wound infected. A septic wound catalyses the process and the code soon becomes permanent. The animal’s suffering is in no way mitigated, and as mentioned above, listening to the animals’ cries even becomes a source of entertainment for observers!

Coded messages have been used for several millennia by the herders of Thar to brand their animals. This is useful to show that livestock — cows, camels, goats, sheep, etc. — marked with a certain sign, belongs to a particular community. These codes take the form of symbolic shapes like a circle, a circle with curved studs or forms of different letters, moulded on an iron rod.

The writer met various cattle owners and enquired about the history and background of animal coding in Thar. None of those interviewed could trace the origins of the practice. The only reply I was given was that they had learnt it from their forefathers. Raichand Rathore, author of the estimable reference book, Tareekh-e-Registan (The History of the Desert), does not elaborate on the roots of animal coding either. However, Rathore’s book mentions that there are 18 different codes, associated with various surnames, castes and subgroups. When a family stamps its respective code, it marks ownership of the coded animal to that specific family — be it Thakur, Meghwar or Bajeer. But only five of the 18 codes are still in use. There may be more than one reason for this decline.

From the 1990s onwards, new agents of change, in the shape of metallic road networks and cellular communications, entered the desert. Both factors pushed an unprepared Thari society into the stream of consumerism. The new situation helped create upward mobility and generated non-traditional employment opportunities. It also conditioned cattle owners to accommodate their preferences. Goats, rather than cows, became the popular animal since they take less time to reach a productive age, when they can be used for milking or sacrificied for their meat. Additionally, goats can easily be managed by women, which leaves the men free to engage in labour in nearby towns. 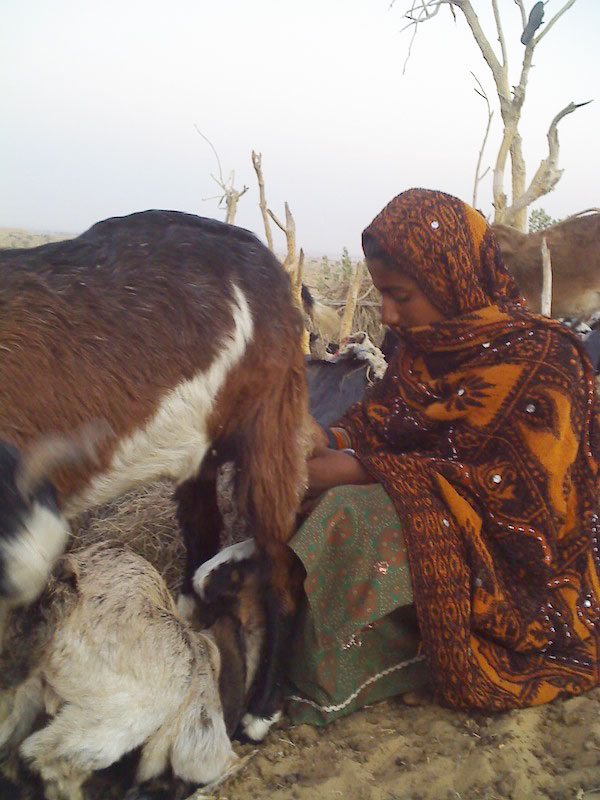 Goats, rather than cows, became the popular animal since they take less time to reach a productive age, when they can be used for milking or sacrificed for their meat. Additionally, goats can easily be managed by women, which leaves the men free to engage in labour in nearby towns. Goats and sheep are not coded in the same way as cows and camels are. A hot iron stamp can leave a deep wound in the animal’s soft skin, so they are identified instead by a cut around the ear, a spot of henna, or some colouring.

Pado Meghwar, a blacksmith from Mithi, adds that a piece of furniture, a mobile set or a motor bike is now being viewed as a better investment option than cattle in the rural areas. Goats are also easier to sell, and are, therefore, preferred over cows. Goats and sheep are not coded in the same way as cows and camels are. A hot iron stamp can leave a deep wound in the animal’s soft skin, so they are identified instead by a cut around the ear, a spot of henna, or some colouring.

Restructuring of pasture lands may also have a role to play. Pasture lands in the vicinity of Thar decreased gradually after the Kotri Barrage was commissioned. An insensitive road network also compartmentalised natural habitats. Hence, there are fewer spaces where herds of different communities could graze together, and there is a lesser need for distinguishing symbols.

Ali Nawaz Nizamani, an official of Thardeep Rural Development Programme, an NGO, has another explanation. He says, after the expansion of the road network in Thar, cattle traders from Karachi and South Punjab started visiting the desert, specially on the eve of Eid-ul-Azha. They preferred to buy cows and camels, but adhered to religious practices by demanding that the animals should be ‘clean,’ i.e. without any mark or cut. He believes that this is a decisive factor in the reduction in the usage of codes. Therefore, out of the five codes that are still in use, only two are frequently used codes today: the Tirshul and Surjio, which belong to non-Muslim communities. However, as Nizamani noted, whether it is five codes or 50, it is irrelevant for the animals that are branded.