Few restaurants in the world give diners the option of ordering both a bun kebab and a panini sandwich. And there can’t be many places in the world where burgers are Besharam and a drink called Loadshedding appears on the menu. Sattar Buksh, the newest and most talked about eatery in Karachi, is getting a lot of attention for its youthful, cheeky brand image — not to mention the overblown controversy about it parodying the Starbucks name and logo.
Located in Block 4 Clifton (on the same lane as Neelo’s and China Kitchen), Sattar Buksh is hard to miss thanks to the giant moustache fixed outside near the entrance. Inside, the dÃ©cor is eclectic: a spiral staircase is covered in truck art motifs, ceilings are wallpapered with floral prints, old photographs of Karachi hang on the walls and vintage ceramic tiles are used for flooring in one nook.

The menu, presented in the form of a clipboard, offers entrees commonly found in local cafes such as pastas, pizzas and sandwiches. But in addition to these crowd-pleasers, Sattar Buksh also offers daal chawal, a range of bun-kebabs and even gulab jamun. Starbucks, the famous coffee chain Sattar Buksh riffs on in good humour, is best known for its drinks. Similarly Sattar Buksh’s strong suit seems to be its beverages section where one can find everything from lassis to mochachinos. The Sattar Buksh signature drink, for instance, is a variation of cold coffee and while it might not be as frothy and thick as frozen beverages typically found at coffee places, it is a delicious thirst-quencher in its own right. Meanwhile, the curiously named Loadshedding is a red-hued concoction that is by equal measures spicy, salty and minty. Although highly refreshing, especially during Karachi’s summers, the fizzy drink is not for the unadventurous. And those who are looking for hot drinks might want to try Sattar Buksh’s tea infusions, although the ginger tea I tried was a little on the weak side. 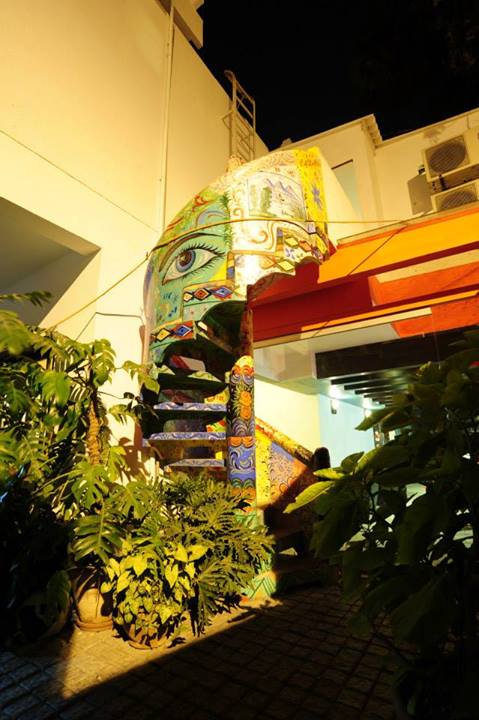 But more about the food. The Sattar Buksh salad sounds like it might be a fusion dish but instead it is a fairly straightforward seafood salad. Fresh and light, the salad is brought to life with a zesty vinaigrette and juicy shrimp. The crab, however, somehow got lost among the other flavours and textures, which is unfortunate since sweet chunks of crabmeat would have resulted in a heartier appetiser. The pepperoni pizza, with its paper-thin crust and melt-in-your-mouth cheese, was a much-welcomed departure from the greasy pizzas found elsewhere and was certainly a highlight of the meal. The pesto panini, although well portioned, was a little disappointing as the gooey cheese overpowered all the other elements. And the fresh, herby flavours of pesto, not to mention its bright green hue, were completely missing. Even the walnut brownie, which should be a safe bet, somewhat missed the mark. The sizable slice of the brownie cake, served with vanilla ice cream, boasted a rich chocolate flavor but either the mix was off or it was baked too long since the texture was slightly dry and the dessert left a cocoa-y, almost powdery aftertaste.

You can’t review Sattar Buksh without talking about its desi offerings. The aaloo-daal Bhinnot bun kebab tasted like its thailay wallah counterpart but presumably was cooked in a much cleaner environment. You could say Sattar Buksh is gentrifying everyday Pakistani food such as shammi kebabs and kulfi and making them hip. But as authentic as these desi dishes may taste, one does feel a bit like a tool spending Rs 250 on a bun kebab that would cost Rs 50 elsewhere.

But you can’t review Sattar Buksh without talking about its desi offerings. The aaloo-daal Bhinnot bun kebab tasted like its thailay wallah counterpart but presumably was cooked in a much cleaner environment. And at just under Rs 300, the three bun kebabs on offer are among the cheaper items on the menu. You could say Sattar Buksh is gentrifying everyday Pakistani food such as shammi kebabs and kulfi and making them hip. But as authentic as these desi dishes may taste, one does feel a bit like a tool spending Rs 250 on a bun kebab that would cost Rs 50 elsewhere.
Thanks to the buzz surrounding the restaurant, Sattar Buksh accommodated large crowds long before it was ready to operate on full capacity — which even seasoned restaurants sometimes struggle to cope with. Sure enough on my first visit there was a mix-up with one of the items ordered but the service is friendly and the owners (who did not know they were being reviewed) were extremely helpful as they went round the tables, guiding people as they ordered their food.

If you order one of the many smoothies with your meal and split a dessert with your friend, you are easily looking at a bill of Rs 1000 per head — a bit steep for a place that jokes about ‘gora’ franchises and primarily caters to a young crowd. Still, Sattar Bukhs’ USP is its novelty, and going by the many occupied tables on an early weekday evening, Karachiites are willing to pay extra for something ‘thora hat kai.’