You have pioneered community theatre in Pakistan and have been working in the field for decades. What makes this work rewarding for you?

Tehrik-e-Niswan started as a feminist, socio-political group with the aim of raising awareness about women’s rights and the status of women in our society. However, very soon Tehrik turned into a cultural group using the performing arts to convey our message.

Our first community/street theatre performance was held in 1979. Since then, we have performed innumerable plays in low income areas in and around Karachi, as well as in interior Sindh. This is the most important aspect of our work — it is certainly very challenging but it is extremely rewarding as well. Through our community theatre, we come in contact with ordinary people, get to the core issues that concern them and we communicate with them at an emotional level. Often we learn how our work has affected those who were in the audience and when we discover that we have touched people’s hearts and that they have actually been empowered through our performances, we feel a great thrill of satisfaction.

Besides this, the very feeling of bringing, not just entertainment, but meaningful entertainment to those who would otherwise never have had the opportunity to watch a play is a reward in itself. We began a movement for the tactical use of the arts to capitalise on human creativity as a catalyst for development and change.

Do you think that theatre and television are more effective mediums of bringing change and awareness than campaigns and seminars? If so, why?

Yes, I certainly believe that the performing arts are the most effective means of bringing change in the human mind and values. In a society that is as illiterate as ours, storytelling in its various forms works amazingly as a means of tackling human rights issues, addressing conflict, discrimination and the appalling abuses of humanity, explaining the law and our entitlement to justice and, above all, enabling people to achieve their right to a basic standard of life and a set of non-negotiable freedoms which are essential to their healthy development.

Tehrik itself began as an organisation holding seminars, conferences and campaigns, but soon we realised the magical impact of the performing arts. After our very first community theatre performance, we recognised that formal approaches to human rights and the wider issues of development are less effective when circumstances involve low levels of literacy, poverty and children, or political, geographical and cultural sensitivities. In such circumstances, creative and participatory techniques can engage other faculties — our visual or aural awareness; our sense of fun and humour; our enjoyment of storytelling, anecdote and gossip; our imagination and natural problem-solving abilities and, vitally, our feelings circumvent the barriers to communication.

Many of your mobile performances are followed up with audience discussions. Is a performance adequate in itself, or is this reflection and discussion the key to creating understanding?

The performances achieve far more than getting a message across. They initiate a dialogue with participants, encouraging them to engage with the issues in a far deeper way than other, more formal methods of raising awareness, such as seminars, conferences and leaflets. The performance works to break barriers in communication and leads towards introspection and questioning, which in turn leads to a change.

What kind of changes have you seen with regard to issues that you are struggling against, in communities that you have been working with?

In Orangi, where we performed continuously for almost three years, the changes manifested themselves after some time. The audience comprised mostly women and young girls. When we went there after a gap of two years, we were informed that these girls had gained self-confidence and self-esteem. Earlier they were afraid to speak out, but over this period of regularly watching our plays they had become very vocal and actually found a voice. They had started making their own decisions about their lives and, also, they had learnt to assert themselves. More importantly, they now understood that they are equal in all respects to their menfolk. 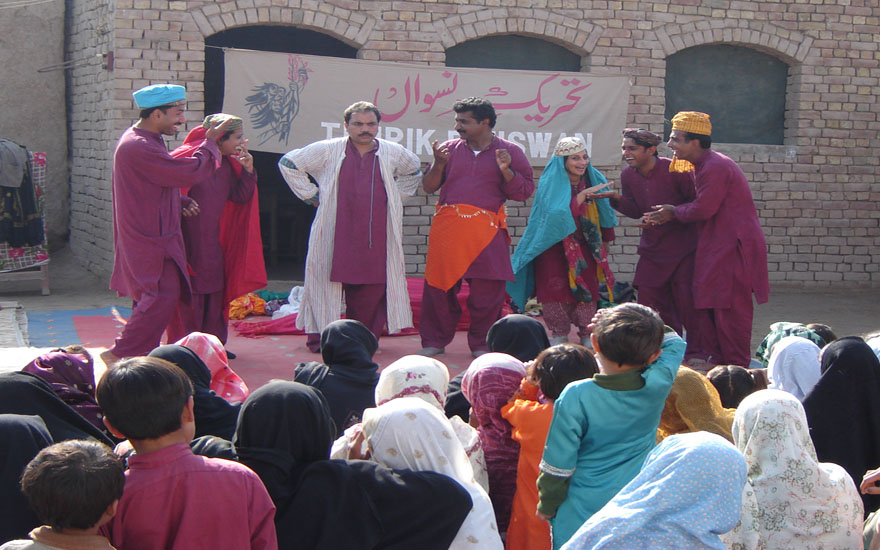 In the play about suicide bombings, it is important not to dismiss the key role of the maulvi. “The audiences will only get provoked if we say something against Islam or the maulvi. But if we portray the character of the maulvi as a thoughtful, conflicted man, then they will listen,” Sajid points out. “We do not provide the answers, we just ask the questions.”

Your plays deal with taboo themes and go against an established order. How do you incorporate charged issues into your work while remaining sensitive to your audience?

I would say that we rely on our ideology and our faith in the knowledge that we are always telling the truth from our hearts. We are on the side of the oppressed — we pose alternatives, we do not provide answers.

What kind of backlash have you and Tehrik-e-Niswan received for your work? How do you respond to criticism?
We have usually had very positive feedback from the people. I have full faith in the people. However, there have been occasions where we have had problems. To give you an example: We were performing a play on honour killing in a small village in Sindh and the local mullah announced from the mosque that to watch our play would be a sin. Within minutes, the audience that had gathered simply disappeared.

I have no problem with criticism. My answer to it is, if you do not like what we are doing please do not come to see our play.

Mobile theatre has unique constraints; how does this affect the way you prepare and perform? Do the plays have an adaptable script?

In fact, I find the constraints very interesting. The different spaces force us to tap into our creativity as we try to figure out how we can best utilise the given space, light and sound. The script only changes if and when we have knowledge and information in advance about a certain locality and its characteristics.

There is some debate about the commercialisation of art and performance. Tehrik-e-Niswan’s mobile theatre performs for free. What do you think is the primary function of art, and should it be commercialised? If not, how can the artistic community sustain itself?

I believe that art has a purpose and that the artist has a role in society. But then, of course, there is all kinds of art and all kinds of performances. There is no reason why there should not be commercialisation of art.
I believe that there should be all variety of work, both commercial and
non-commercial. I choose to do a certain kind of art but someone else may choose another kind — there should be this freedom and option. As for those like myself who choose to do meaningful art, I would say we need to find other means of survival — after all, how many poets can survive by writing poetry alone?