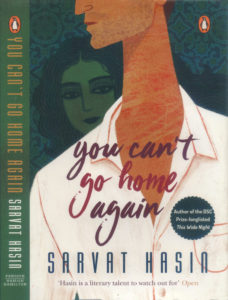 It starts in Karachi with auditions for a high school drama production of the play, The Crucible by Arthur Miller, a dramatisation of the infamous Salem witch trials in Massachusetts in 1692-93. The play  chillingly depicts the extreme communal behaviour that can result from inflaming religious fervour, dark desires and hidden agendas. By the end of the trials, the Salem court had convicted and executed 19 men and women on charges of witchcraft and sorcery. Perhaps this is an indication of where this book is headed.  Of the  main four (of six) 16-year-old protagonists  picked for the play — Karim, Shireen, Rehan, Naila —  the first two have  intermittently known each other since childhood,  and they are to enact the roles of the doomed husband and wife in the play.

Off-stage, Shireen, despite her ostensible cold demeanour, has strong feelings for Karim, which she is unable to convey. However, that dream is shattered when, at the end of a very successful first show, Naila announces that she and Karim have “been together a few weeks.”  In between the rehearsals, Rehan disappears, presumed kidnapped. He is returned at dawn six days later, propped against the gate; disoriented, speaking gibberish, outwardly in one piece, except for the bite marks along his shoulder and neck. When his speech returns he confides to his friends that  ‘It’  took him, that he forgot the difference between day and night –  “one of the signs of qiyamat?” he asks. No one really wants to discuss that — not his friends, not even his family, who just refer to the incident as an “accident.”

School ends. So do the connections. Shireen walks away and the others pursue different paths. Naila is determined to wed Karim who seems willing, but is ambivalent about committing. Until, now 10 years later, Naila uses the connection given to her by Maliha (who dabbles in the dark arts), the younger sister of her ‘best’  friend Sabah, to get a babaji and some black magic to help speed up the process. It works overnight, and just like that, Karim agrees to get married. And the wheels keep turning.

This is the second book by Sarvat Hasin. Not having read the first, it is a little difficult to compare styles. Here, she has chosen the quotationless form of writing the narrative, which is difficult, but she has handled it well. In addition, there are frequent flashbacks, which make following the narrative a bit difficult; you have to concentrate.  You Can’t Go Home Again is firmly set in the very current jinn genre of books that have been very successful recently, here and internationally. To mention just a few — Boy of Fire and Earth by Sami Shah,  The Golem and the Djinni by Helen Wecker,  Alif the Unseen by G.Willow Wilson, The Djinn Falls in Love and other stories edited by Mahvesh Murad and Jared Shurin.

Most of the references to jinns (in this and other similar stories) are taken from the Islamic scriptures and from Arab fiction. Churayls (witches with their feet turned backward, so it’s said), are also referred to. What Sarvat has done, as Sami Shah did in his book, is relate the supernatural or other-worldly to our very mundane, ordinary lives, and what happens when the two intersect. A point of interest, I have felt for some time, is how mainstream the conversation on these topics has become. And how dangerous.

The book moves seamlessly through the years and locales. There is a generous dollop of skin and sex in the narrative. Karim and Shireen meet years later in London and finally make the connection that Shireen craved all those years ago. Only he has a girlfriend-in-waiting, and perhaps it’s not to be. When Karim  ‘sees’ Shireen after her mysterious death in London and gets a text message, he bolts. Straight back to Karachi and to the marriage Naila has been craving. If there’s one lesson in this book it’s this — be careful what you wish for, you may get it. And it may come at an unbearable price.

Meanwhile, time rolls on. Rehan manages to survive till 40, still single. Until Maliha, who was a year junior to him in school, and is now a hugely successful ‘bad girl’ actor who made good on television serials, with scandals galore and a son from an unnamed father, meets up with him somewhat serendipitously, and later suggests they get married. She reassures a reluctant Rehan it is not for love — “we are not teenagers” — but a marriage purely for convenience and convention. The Force wins.

Is happiness on the cards for any of them? It doesn’t end well in The Crucible. Will it, does it, end better for the protagonists in You Can’t Go Home Again? A fast-paced, engrossing, if somewhat disturbing read,  ‘It’  asks the final enigmatic question: “What are you afraid of?”