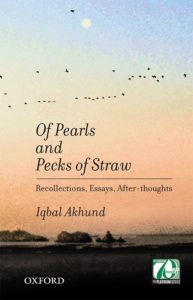 While diplomacy may not be the oldest profession in the world, it was established formally from the 5th century AD in the Byzantine Empire.  Later, in the 16th century, diplomacy got associated with intrigue, spying, double-dealing and subterfuge in matters of the state and international dealings. This was the era of the notorious Niccolo Machiavelli of Florence.

Diplomats, since antiquity, have been writing tomes on assorted subjects. But Of Pearls and Pecks of Straw, written by Iqbal Akhund, takes on a different tack.

A retired career diplomat with more than 30 years of service that included ambassadorial appointments to a number of countries and representation in UN agencies, Akhund belongs to the first batch of diplomats that entered the Pakistan Foreign Service, after the partition of India.

One evening, when I returned rather tired from work, I found that a book had been delivered by Newsline for review — it was Akhund’s book. I casually started flipping through the pages and it was only much later that I realised that I had read a quarter of the book. This is a clear testament to the readability of this collection of essays. The writer’s style is light but not frivolous, and grabs the reader’s attention while eliciting some chuckles along the way. In the acknowledgements section, he thanks the publisher for accepting “….to publish in these serious times, the light-hearted reminiscence.”

Akhund’s intellectual integrity is established as he recounts his family history. In a country that has completely distorted its cultural and religious roots by disconnecting it with the real history of the people, it is refreshing to read the author describe in detail his maternal great-grandfather’s and great-grandmother’s conversion to Islam. The essay, ‘A forgotten page,’ is material that should be taught in our textbooks on the history of Sindh. Most would have written off this chapter, but Akhund proudly reinstates it as a tribute to the diversity of our culture.

The author, now in his 90s, treads lightly on the subject of mortality. In the chapter “Time, like a dark wind…,” he writes eloquently: “Then, death is a presence you have to live with, even before it occurs; a stranger in the midst of the living — unrelenting, unfeeling, there to do what he must, without hate or emotion, like a bailiff with a decree on all you possess and hold dear.”

It is good to see that unlike the usual “Brown Sahibs”, who were the mainstay of the Pakistani bureaucracy before it opened its doors to the “great unwashed,” Iqbal Akhund has a keen eye for the happenings in the streets of a city.  In the essay ‘Westernisation,’ there is a delightful little picture of a truck with a couplet that nicely encapsulates the ire of the conservatives towards women for their lack of religious knowledge, and their (perceived) inclination towards westernisation.

The city of Hyderabad (Sindh), where the author’s family settled after migrating from India, takes on a lot of colour with the description of what, to some Hyderabadis, was the ‘Paris of the East.’ There is a wonderful anecdote that describes how in the Hindu Mohallas of the Hyderabad of the past, a person’s identity was linked to the street of residence. So instead of surnames, the inhabitants were known by the streets they lived in. When the author went to a Hindu school as a new boy he was asked, “What is your surname?” he replied, “Civil Lines,” leaving his classmates totally perplexed!

Moving on from Hyderabad to Karachi, the essay ‘Joe, Jim, Jam’ has a charming account of the so called ‘Irani CafÃ©s’ including a hilarious free verse titled, ‘Irani Restaurant Instructions.’

The poem, written by a Bombay poet, Nizzim Ezekiel, goes like this:

do not sit more

do not write letter

do not make mischief in cabin

our waiter is watching

all are welcome whatever caste

if not satisfied tell us

The essay goes on to describe the trio of close friends that included Akhund, a Muslim, Thomas, a Christian and Prem, a Hindu. Surprise of surprises, it is revealed that the famous incident in India in the 1950s in which a Parsi naval officer, Kawas Nanavati, shot dead a philanderer who was having an affair with the officer’s wife, was none other than the dashing Prem Ahuja of this erstwhile trio! This story was retold in the recent Bollywood blockbuster, Rustom.

The book covers a broad spectrum of topics — ranging from pre-partition India to contemporary Pakistan. The author puts to good use the experience and knowledge he gained in his postings across several countries of the world. Clearly, he is an astute observer — kind of a modern-day Ibn-e-Battuta, the legendary 14th century Moroccan traveller and scholar. The reader is taken on a trip to familiar cities like Paris and New York, and onward to more exotic locales in China, Egypt, Lebanon, South Africa, Chad and Yemen, where his encounters with the unfamiliar range from the dangerous to the outright hilarious.

In one such story, the author is visiting Beijing as the Benazir government’s Advisor on Foreign Affairs. One morning, Akhund wakes up with a sore throat and asks the waiter to bring an aspirin and a glass of warm water to dissolve it in. The uncomprehending waiter goes away, only to return with a team of protocol officer, doctor and nurse. The doctor subjects him to a thorough examination and, much to his dismay,  tells him that they cannot take any risk with a man of his age! He is then prescribed an antibiotic, a cough syrup, pills and…aspirin.

One notices that the author has shied away from dwelling at length on some important and contentious issues like the partition of Pakistan. The essay, ‘Two Nations,’ is a very short and cursory analysis of the two-nation theory that led to the creation of Pakistan.

Minor quibbles aside, Of Pearls and Pecks of Straw is an intelligent read that takes your mind away from the painful issues of violence, politics and injustice. It is an account of a life well lived, and a world well observed — with a keen eye, a sense of humour, and tremendous humanity and sensitivity.  n