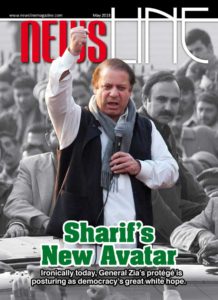 But it was unprecedented, even by PML-N standards. First, they appointed their financial adviser, a non-elected member, as finance minister (Never mind that they already have a minister of state for finance, who is an elected MNA). Soon after, they rushed him to the National Assembly — to present their sixth budget. And a year-long budget at that, when they have only two months remaining in office.

In one fell swoop, the government managed to pull all the right strings: the public at large, the business and traders community, which is their main constituency, and, above all, the army.

Development took a cut, while defence got a  boost. Understandably so. And business houses got incentives like never before. So who is coughing up the money?

Only last month, when the former financial adviser made a trip to Washington to seek loans from the IMF and the World Bank, he was shown the door. Best friend China came to the rescue, with a billion-dollar package. Does it make good financial sense? More importantly, is it fair to be piling the next government with more debts?

Not surprising then that the opposition is accusing the PML-N of pre-poll rigging.

In its final months, the party is feeling unusually generous. It promoted four of its advisers to the post of federal ministers and inducted another MNA as minister of state — for their staunch defence of the former prime minister.

Incidentally, the PML-N has lost one of its biggest loyalists, Khawaja Asif, following an Islamabad High Court ruling against him, on the complaint of a PTI legislator. Asif’s case is particularly embarrassing. While serving at the important post of Pakistan’s foreign minister, he was only a phone call away for his other employers — a mechanical and engineering firm in the UAE, for which purpose he held an aqama. While passing the judgment, the IHC lamented the fact that politicians were bringing their squabbles to the courts, instead of seeking resolutions in Parliament.

Had the leading parliamentarians, notably Nawaz Sharif and Imran Khan, held the Parliament in some esteem and attended its sessions regularly, others would have followed suit. Now, more than ever, the Parliament is being used to settle scores and create pandemonium.

As the poll date nears, and the country swings into election mode, political parties need to keep their tempers and tongues in check to avoid a bloody election.

Fortunately, April 29 — the day PTI, PPP, QWP and ANP held major jalsas — passed peacefully, without any untoward incident. Missing in action was the PML-N. But they registered their presence — by targeting the women at the PTI jalsa in the most foul language. Not so long ago, their foreign minister had done ditto with PTI legislator, Shireen Mazari, in the National Assembly. Is it the PML-N culture to bad-mouth women? Perhaps ‘Vote ko izzat do, aur auraton ko be-izzat na karo,’ would make for a more appropriate PML-N slogan in the coming elections.