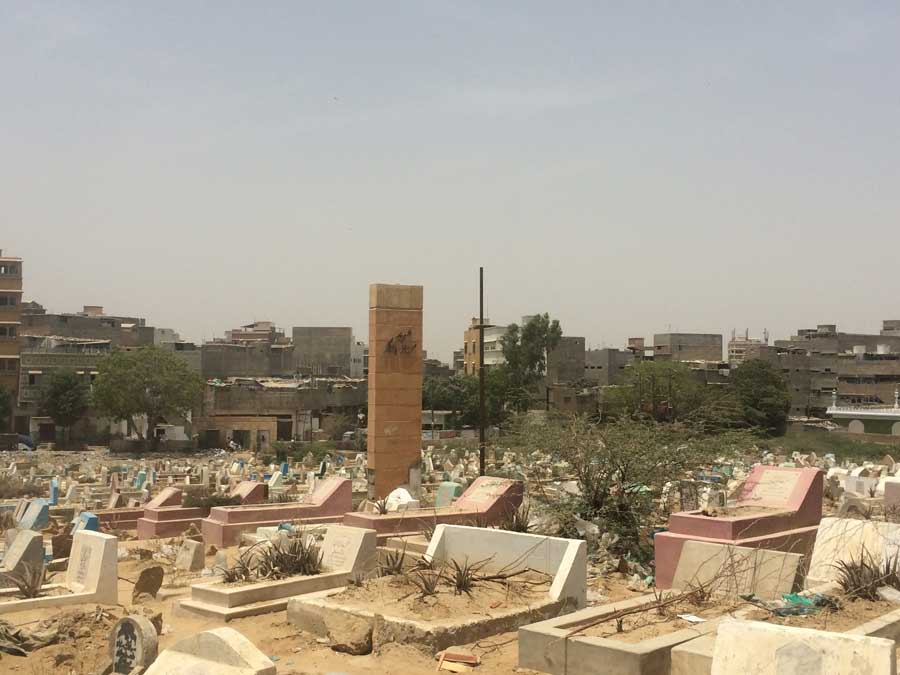 Graves of the martyrs of the 1972 Labour movement.

Muhammad Irshad alias Chai Dada  (tea stall man), 81, has lived in the Pashtun-dominated locality of Frontier Colony Number 2 for more than 50 years. He has been a witness to many changes, many events. Perhaps the most significant event he was an eyewitness to was the incident on June 8, 1972, when police opened fire on unarmed, unsuspecting protesting textile workers at Banaras Chowk, Orangi Town. This was the first time in Pakistan that such force was used against labourers and that resulting in many deaths (the exact numbers are still debated till today, 46 years later) and was a watershed moment for the labour movement in Pakistan.

The issue started with a series of strikes and protests against textile mill owners, for their repressive tactics and the then PPP government’s inability or unwillingness to address the problem, despite getting elected with pro-working class slogans. The early 1970’s were tumultuous times:  the first truly fair elections held in Pakistan were followed by a brutal repression in East Pakistan, a war with India, the subsequent secession of East Pakistan, the installation of a PPP-led government under Zulfikar Ali Bhutto in West Pakistan and a series of agitations by labour unions, that culminated in the fateful incident of June 1972.

The trigger for the Banaras Chowk protests was a violent incident at Feroz Sultan Textiles at SITE on June 7, 1972, that resulted in the death of a local labour leader, Muhammad Shoaib, representing the Muttahida Mazdoor Union, which caused an outrage. The funeral prayers were to be held the next day at the Banaras Chowk in Orangi Town, surrounded by Pashtun localities. However, there was a demand from the protesters to take Shoaib’s coffin and place it in front of the Governor’s House . This move was resisted by the law enforcement agencies (LEAs), who opened fire on the agitating labourers, killing many.

“The crowd that had gathered for the funeral (of Muhammad Shoaib) was huge,” recalls Abdul Majeed, who worked at an iron welding shop at Banaras Chowk at the time. “Some of them were insisting that the coffin of their leader should be taken to the Governor’s House to protest the killing, but the firing by the LEAs spread havoc. There were screams and angry calls for revenge, and the bodies of the dead and injured were spread all over the Chowk.” 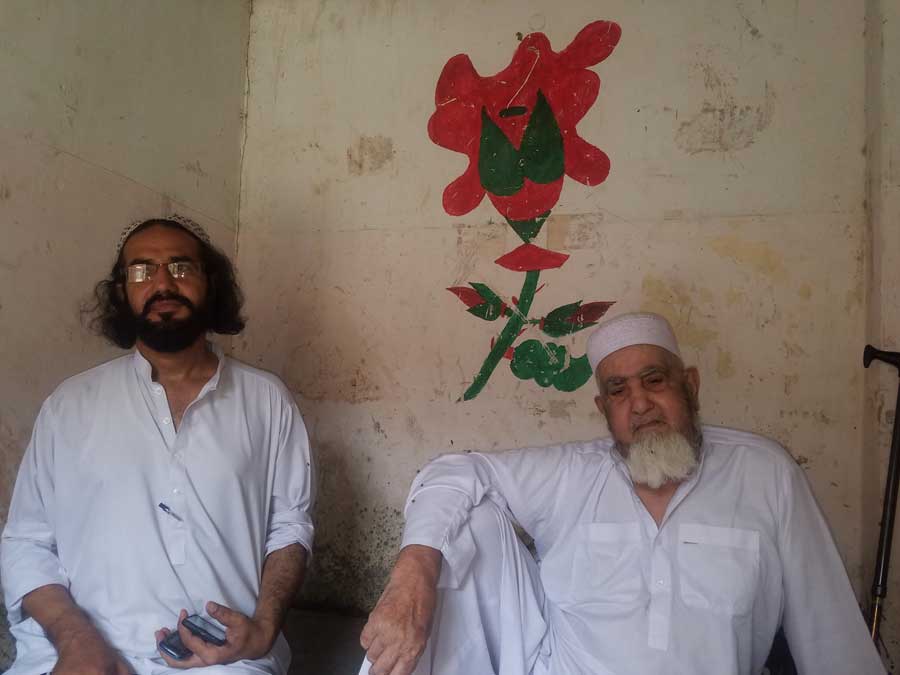 Muhammad Irshad (right) at his Baithak.

Majeed claims that the total number of the labourers killed that day was 17, and that a few of them were buried in the old graveyard of the Sufi saint, Bukhari Baba, close to Banaras Chowk, where Arif Hospital currently stands. There is some controversy that the hospital has been built over the graves of the martyred workers. But Majeed’s claims could not be verified from other accounts, as the small graveyard of Bukhari Baba, situated behind Arif Hospital and the Banaras Nullah, contains mostly unmarked graves; the few that have their names inscribed on the headstones are written in Urdu and Gujarati script which shows that they were from the times when these lands were not inhabited.

A political worker, who didn’t want to be named, referring to the Bukhari Baba graveyard said, “Those are old graves at the other end of the Paposh Nagar graveyard.  Yes, the land has been encroached upon, but none of the labourers killed in the 1972 police shootout was buried here; all of them were buried at the same place in the Frontier Colony graveyard. Arif Hospital might have been built on the encroached land of the (old) graveyards, but claiming that it was built over the graves of those martyred labourers is simply ridiculous.”

Muhammad Irshad picks up the narrative. He recounts how he witnessed the development of formal and informal settlements in Karachi, especially those around the Sindh Industrial Trading Estate (SITE) and all the political and social activities there.  “In 1948, when I was nine, my mother passed away,” he recalls.  “My father then decided to move to Karachi. We travelled by foot from our native village Chindakhwara (the old name for Kabal, a subdivision of district Swat in KP). The journey took six months.”

Their first stop was an informal settlement located on the peripheries of what would later become Liaquatabad and Nazimabad. His father opened a dhaba opposite Nazimabad Number 2 bus stop, where the famous Seth Saifullah Bangash Hotel was later built. A nine-year-old Irshad would assist his father in waiting on customers. “I remember the construction of these residential blocks in Nazimabad and Liaquatabad,” recalls Irshad, who served tea to the labourers working on these sites.

Later, he and his father would move to the informal settlement of Frontier Colony, with Irshad working at Hafeez Mills near Pak Colony — a job he would stick with for three decades.

“It was while working in the textile sector at age 20,  that I got involved in labour union activities, and later joined the newly formed Pakistan People’s Party (PPP),”  says Irshad. He and a few friends established a party office in their locality. “I was the first person in Frontier Colony who hoisted the PPP flag. I also acquired an iron sword — the PPP’s electoral symbol — from the house of a PPP leader, and mounted it on the wall of my baithak.”

At the time, the locality was dominated by the Jamaat-e-Islami (JI). It was during the lead-up to the 1970 general elections, that a religious decree signed by 113 clerics, had been issued against the major political parties, including the Awami League (AL), the PPP, the National Awami Party (NAP), and the Jamiat Ulema-e-Islam (JUI).

“There were widespread suspicions against the newly formed PPP and I was advised by my party leaders against hoisting the party’s flag over my house,” recalls Irshad, adding, “but I was undeterred, as the party had many supporters in my locality.”

However, the shooting at Banaras Chowk on that unfortunate day changed the course of events.

Sher Bahadur, his son, and like his father, a diehard supporter of the PPP in the locality added,  “Except for my father, I have always heard my elders accuse the PPP for those killings. My father, who had hoisted the PPP flag over his house, was forced to pull down the flag after the incident. The PPP government, as part of its efforts to try and atone for its earlier mistake, regularised the informal settlements of Frontier Colony and Pathan Colony and provided basic amenities like water and electricity to the residents. But the damage was done and the party lost support in these localities. “The opposition to the party further intensified during the Pakistan National Alliance (PNA) agitation against Zulfikar Ali Bhutto, and resulted in another unfortunate incident in 1977, when the house of a PPP local leader, Habibur Rehman Khattak, was attacked by an angry mob after a clash over hoisting the PPP flag and a firing incident in which some people were injured. In retaliation, Khattak’s house and adjacent baithak was set on fire. This resulted in the tragic deaths of Khattak and 12 others who were burnt alive. It was only in 1987 that  I was finally able to hoist the party flag again over my house — after a period of 14 years.” 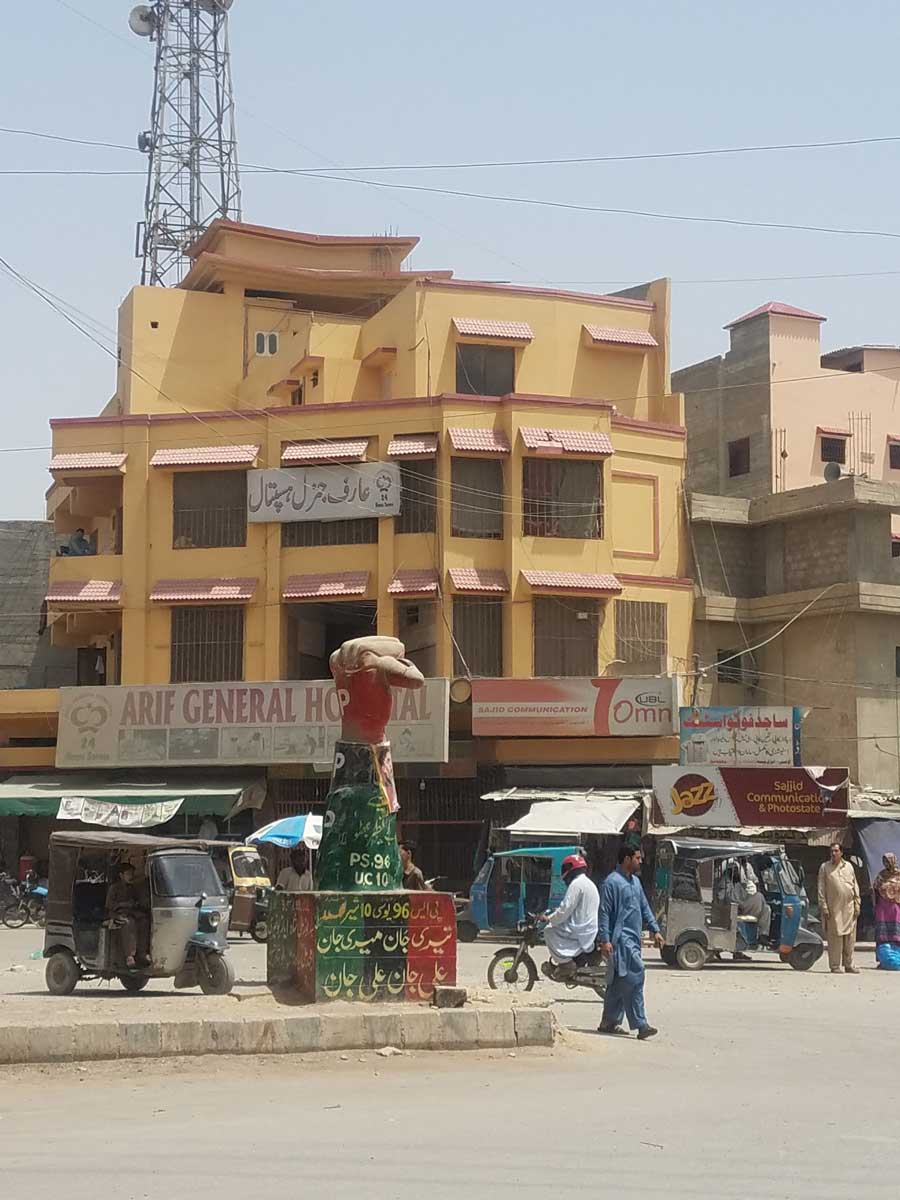 The 100-square yard house of Muhammad Irshad is located in the narrow alleys of Noorani Mohalla, near Daag Maidan, a 400-square yard open space in the thickly populated locality, formerly a Janazagah.  Irshad says that the coffins of the 10 labourers killed by the LEAs firing were brought here and the funeral prayers offered. Irshad was among those who helped in digging the graves in the Frontier Colony graveyard. He categorically denies that 17 people were killed, as some claim, or that they were buried elsewhere. “All of them are buried at the same place their graves are marked with red colour. The Frontier Colony graveyard was renamed Shuhada-e-Mazdoor Qabristan (graveyard of the martyrs of the Labour Movement).” PILER has constructed a monument at the graveyard in memory of the martyred workers.

According to Taseer Jan, a former worker from the Gandhara Industries, “Since the blood of the injured and the deceased was spilled at a particular spot near  Banaras Chowk, the place was encircled with stones and marked with small flags of red, green, white, and black for many years. It is a Pashtun tradition. This may have given some people the mistaken impression that there were actual graves here. That was not the case, it was just done to show people the place where the blood of the martyrs of the Labour Movement fell. Banaras Chowk was then renamed as Shahidano Chowk by the local people.”  But now, that too has changed.

In the early ’90s, the Chowk was renamed Baacha Khan Chowk by the local chapter of the Awami National Party (ANP). The ANP Sindh provincial head office is also located there, built in 2004 over the encroached land of an amenity plot. The labour movement, it appears,  is no longer relevant.

So many stories, so many memories.  Unfortunately, those who remember what happened during the labour movement uprising in Karachi in the 1970s are dying one by one and so far there has been no proper attempt to document the narratives related to the movement. There is a saying that those who don’t know their history are doomed to repeat it. Are we doomed too, because we refuse to acknowledge  the lost narratives?