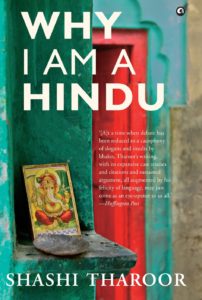 The very word ‘Hindu’ is a misnomer. It was coined by the Greeks and Persians, 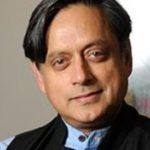 when they first came in contact with the various inhabitants beyond the Sindhu (Indus) river in the first Millennium BC. As a testament to the adaptability of the ancient faith, Hindu is the term that even the most regressive elements of the Hindutva ideology choose to identify themselves with today.

Sanatana dharma — ‘the eternal way’ — is a more apt term for all the diverse creeds, doctrines, sects and belief systems that have originated from the spiritually fertile terrain of the Indian Subcontinent. This is but one of the many misconceptions that Shashi Tharoor aims to dispel about the faith, in his new book, Why I Am Hindu.

He begins with a personal account, having been raised by religious parents, who instilled in him a deep reverence for their strand of Hinduism. On family trips to the southern tip of India, they would make pit-stops at every temple and pray to its presiding deity.

Despite a religious upbringing, by his own admission, Tharoor is not a fundamentalist. Instead, he goes on at great length about the tolerant and inclusive spirit of the Hindu faith, that he and the majority of its believers, practice on a daily basis. The initial chapters are about the origins of the belief systems that come within the ambit of sanatana dharma.

The six main branches of Hinduism — doctrines contained within the vast body of its sacred texts, including (but are not limited to) the Vedas, Upanishads, the epics of Mahabharata and the Ramayana (similar to The Illiad and The Odyssey) and the Puranic texts that came later — all contributed to Hindu thought over the centuries. What sets it apart from the Abrahamic faiths is that it is a religion without a founder, prophet, or rigid dogmas.

Despite, or perhaps because of its ancient roots, the author contends that it has shown a remarkable tendency to adapt, absorb and even reform within itself the many belief systems that it encountered, as well as the ones that originated from within its fold. He alludes the sanatana dharama to the banyan tree, which is deeply rooted in the ground, but spreads its branches far and wide, sheltering a multitude of different beliefs within its shade. Over the ages, it has met with its fair share of existential challenges.

The first such threat posed to Hindu orthodoxy, was at the advent of Jainism and Buddhism. The emphasis of these two religions on  non-violence (ahimsa) and liberation of the self (moksha) to escape the cycle of rebirth, won them an increasing number of followers.

The 8th century philosopher sage, Adi Shankara, not only incorporated the many precepts of Jainism and Buddhism in Hinduism’s fold, but also formulated his philosophy of Advaita Vedanta — the union of Atman (self) and Brahman (the whole). He travelled the four corners of the Indian landmass professing his beliefs and setting monastic orders along the way, all of which exist to this day.

Within a few centuries, both Jainism and Buddhism ceased to be a threat to Hinduism. Similarly, the syncretic Bhakti movement of the 16th century, and its emphasis on one God, egalitarianism and devotional hymns, were inspired in response to the threat posed by an ascendant Islam, after the formation of the Delhi Sultanate and later, the Mughal Empire. It claimed devotees from Muslims — notably the 15th century mystic Kabir — as well as Hindus.

Sikhism was also a by-product of the intermingling of Islam and Hinduism. Even though it is a separate religion, it still is considered a branch of sanatana dharma. In a similar vein, there was a whole slew of reformist movements by luminaries such as Ram Mohan Roy — the founder of the Brahmo Samaj movement — and Swami Vivekananda, who founded the Ramakrishna Mission that countered Christian missionaries. It was the creative adaptability and resilience of its votaries that Tharoor contends led to Hinduism’s dominance, at least in the spiritual landscape of India, through the ages.

The book is not a hagiography by any means. Tharoor critically examines  some of the controversial tenets of the Hindu faith, including the inequities of the caste system, heavy reliance on superstitious beliefs, acceptance of horoscopes as fate and the many charlatans that have posed as spiritual gurus, bringing the faith in disrepute.

The second part of the book delves into the origins of political Hinduism, chiefly its most virulent form — Hindutva — and the threat it poses to Indian polity. He goes on at length about Golwalkar, Savarkar and Upadhyaya, whose exclusionary nationalism gave birth to the far right movements of RSS, VHP, Mahasabha and eventually, their political arm, the Bharatiya Janata Party (BJP), which holds the levers of power in India today. The demolition of the Babri Masjid, the massacre of more than 2,000 Gujrat Muslims right under the nose of the then chief minister Narendra Modi, the lynching of Dalits and Muslims for eating beef, and the removal of the Mughals from history textbooks, are only a few of the horrific manifestations of this insidious ideology.

Ironically, it is Hindutva — a doctrine that aims to go back to a pristine version of the Hindu faith — that poses the biggest threat to the Hindus in present times. It is all the more alarming that the ruling party, the BJP, is the by-product of the Hindutva ideology, which won a landslide victory in the general elections using anti-minority sentiments as a ballast to its electoral triumph.

The last part of the book focuses on the ways in which Hinduism can be won back from its abusers. Besides a personal avowal to hold on to the inclusive, tolerant spirit of Hinduism and a recapitulation of its glorious history, the author doesn’t present any political manifesto or strategy to counter it. There is no mention about how moderate Hindus and other minorities in today’s India, may assemble and resist a movement that wants to consign them to the margins.

Another glaring bias of the book is how the author paints Pakistan as some sort of a theocratic state. As a historian, he should be well aware that the need for Pakistan arose out of the obstinacy of the Nehru-led Congress, to concede any ground on the question of Muslim representation in an Independent India. It was first and foremost a political dispute with a religious dimension, rather than vice versa. Another extraordinary claim he makes is that the Pakistan Army declared war on the ‘unbelievers’ in 1971, when in fact it was the Indian army that proactively intervened in the war on ‘humanitarian grounds,’ with the intention of dismembering Pakistan’s eastern flank.

He lauds the unity in the diversity of Indians, citing Hinduism’s inclusive spirit as one of the major factors behind this, but gives scant attention to the various insurrections that have been raging ever since India’s independence — be it in Kashmir, Nagaland and its Northeast frontier provinces  or the Naxalite rebellion. The affected populations of these states include both Hindus and non-Hindus.

Tharoor’s latest work is, nevertheless, timely. It comes at a time when India is at a crossroads. The book simplifies the many strands of Hindu thought for a general audience, and outlines the threat posed to it by the enemy within.