When the warm sun, that brings

Seed-time and harvest, has
returned again… 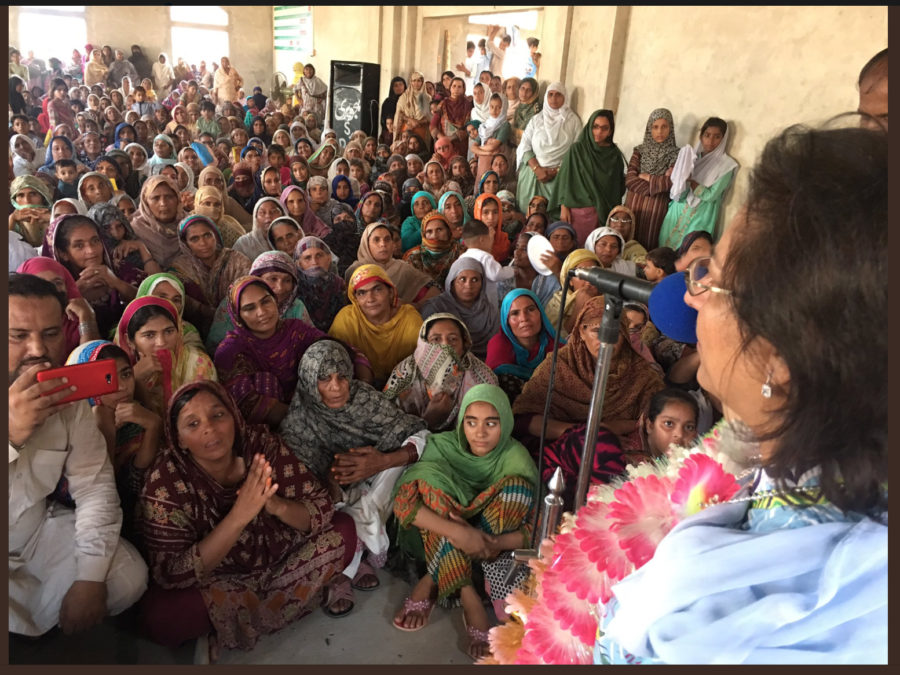 As the farmers in Punjab harvested a bumper crop of wheat, on the Okara Military Farms this April, there was palpable tension in the air. Several women in each village set up camp and kept vigil on the fields, lest the men in uniform appear and demand their batai (share). For the last 19 years, the women have fought and resisted them relentlessly, along with their men, to claim the land their forefathers have tilled for a hundred years, in the hope that some day the ownership would be transferred to them as promised by three successive heads of state.

The year 2018 has brought sorrow and added to the anxieties of the farmers. Their strongest ally, Asma Jahangir, who fought with them in the courts, is no more. Meanwhile, the repression of the present incumbents has intensified. In 2023, the status of the lease of the land will change in favour of the farmers. According to the rules, if an agricultural land is tilled by the occupancy tenant for 25 years, he or she has the right to claim its ownership, Aqila Naz, finance secretary Anjuman-e-Mazarain Punjab (AMP) and president Peasant Women’s Society Pakistan, tells Newsline.

On February 26, Yunus Iqbal, leader of the movement and five others were picked up by the agencies, and made to sign the contract for a cash rent system that the AMP had been resisting since 2000. This is the second time the peasants have been forced to sign the agreement under duress. In 2004, the forces had invaded the villages and got signatures from each and every tenant. It was Asma Jahangir who fought their case.

On March 19, when the farmers gathered to pay homage to her on the fortieth day of her death, the police raided the village and disrupted the gathering, injuring several participants. On April 4, the Supreme Court rejected the plea to transfer Mehar Abdul Sattar, general secretary of the AMP, under trial since April 2016, from Sahiwal’s high security prison — Pakistan’s Guantanamo Bay — to the district jail.

The month of April did not bring any good tidings for the tenants. As they were contemplating how to commemorate the International Day of Peasants’ Struggles on April 17, their leader, Yunus Iqbal, chairman AMP, was once again picked up by the agencies on April 13, along with his colleagues. When a petition was filed in court regarding his disappearance he was brought to the Okara Police Camp, an FIR was registered against him on fake charges and he was put behind bars.

As compared to the thousands of acres of land owned by the rich and the powerful of the country, the farmers are fighting for a mere 17,013 acres of land in Okara, and three democratic governments have colluded with the powers-that-be to prevent this from happening. It is seldom that we, the dwellers of the concrete maze called cities, turn our gaze towards the rural backwaters of Punjab or Sindh or  Balochistan or KP, to see the injustices that are being perpetrated there.

According to the 2017 census, the rural population forms 60.3 per cent of the total population. Agriculture, despite its falling share in the GDP (19.5 per cent), remains the largest sector in terms of employment: 42.3 per cent of the country’s workforce toils in the fields, grows food for all of us, and yet it is mired in grinding poverty, landlessness and subjugation, indicating a deep malaise in agrarian economic and social structures. According to the last Labour Force Survey undertaken in 2014-2015, agricultural workers earned Rs 7,804 a month, while the national average monthly wage stood at Rs 14,971. With the average family size at 6.31 per cent and 1.89 earning members per family in Pakistan (the Household Integrated Economic Survey 2015-2016), the monthly income of a rural household translates into Rs 77 (less than a dollar) per person per day. Low income, combined with poor access to basic facilities in health and sanitation, education and physical infrastructure, have trapped the rural population in a cycle of poverty.

Land grab and violations of human rights of peasants are registering a rise the world over due to unrestrained capital accumulation and corporate greed. But alongside, so is the struggle of the peasants for their rights. The international movement, La Via Campesina, with 182 member organisations in 81 countries, is globalising hope and solidarity among millions of peasants, farmers, landless people and agricultural workers. Being an affiliate of the Kisaan Rabita Committee Pakistan, the AMP is connected with La Via Campesina. In Pakistan, the Okara Military Farms tenants’ struggle is actively supported by civil society, human rights defenders, the national human rights institutions, trade unions and workers’ groups — and millions of silent supporters.

Whether this support will translate into ownership of the Okara farms for the peasants, remains to be seen.