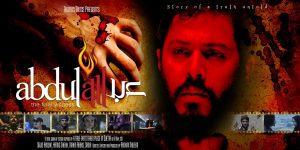 It can be difficult separating Abdullah: The Final Witness from the real-life controversies that surround it — be it the decision by the Pakistan Film Censor Board to ban the film last year or the 2011 Kharotabad incident which inspired it. Abdullah was originally slated for release last year, but its political content proved too much for the censors, who seemed only to have noticed that it was based in Balochistan and wasn’t entirely laudatory about the state.

The problem is any film which tackles Kharotabad — where five Russian and Tajik tourists were killed by security forces in the mistaken belief that they were suicide bombers — will not reflect well on the state’s actions. The ban was even more unjustified since Abdullah shies away from a thorough indictment of state policies in Balochistan and is more about one man’s search for the truth amid the haze of official incompetence and lethargy.

The individual in question is the titular Abdullah — the truck driver who had the misfortune of giving a ride to the tourists — and he is easily the one bright spot in an otherwise unfocused movie. Played by Hameed Sheikh, who is himself from Balochistan, Abdullah is one of the few fully-formed characters who gives the film all its depth. Abdullah picks up from when the police, under pressure from Russia, has to reinvestigate the Kharotabad killings after holes are picked in the original version. It is Abdullah’s curse to be at the centre of the investigation, led by an SSP played by Sajid Hassan.

The opening interrogation scenes, where the SSP tries to ascertain what happened on that fateful day by questioning Abdullah, are among the most powerful in the film. Unfortunately they are also among the shortest. Hassan, a fine actor, is given very little meat to work with, and it forces the audience to accept that he is an officer driven by the truth without giving us any reason to believe it. The other potentially fascinating but underserved relationship is the one between Abdullah and his assistant (Habeeb Panezai). It takes just one scene to establish the paternal bond between the two as Abdullah gently scolds the assistant for wanting to take the wheel in particularly dangerous terrain.

But Abdullah does not spend too much time on the pair, instead shoehorning in an entirely disposable romance between Abdullah’s son (Imran Abbas) and his lover (Sadia Khan). The two actors were unable to give life to their roles but the task could not have been an easy one since their storyline seems to be separate from the main action of the movie and looks like it was introduced only because it is something audiences expect.

That is a pity since Abdullah is at its best when exploring the motivations of the main character and the problems with the official response to the Kharotabad killings. It is also, like Moor before it, a visual treat that explores parts of the country otherwise ignored by Pakistani cinema — even if there are one too many unnecessary close-ups. The director, Hashim Nadeem, who also wrote Abdullah, deserves credit for his vision and thoughtfulness, even if the final product is not perfect.

Worthy an attempt as Abdullah is as a film, its original ban means one inevitably looks at it through a political lens. Here it is hard to understand what all the fuss was about. Sure, the state comes off as incompetent but the movie is hardly an indictment of our policy towards Balochistan and does not take on any of the sacred cows who are so defensive about their conduct in the province. Apparently the censors originally demanded three cuts in the film which were then made, but it is hard to see how even with those scenes intact, Abdullah could be seen as anti-state in any way.