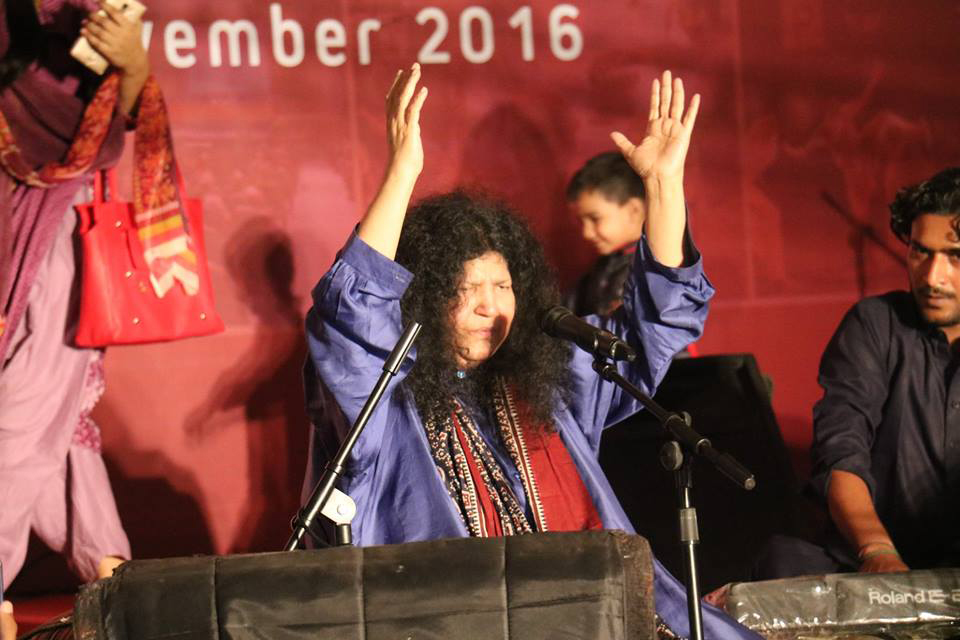 The first Sindh Literature Festival (SLF) ended with music and a few resolutions on November 6, 2016, at the Beach Luxury Hotel, Karachi. Before its launch, the organisers had succeeded in creating sizeable momentum in regard to the event, mainly through social media. A day before it kicked off, however, anonymous messages started to circulate on social media platforms that the event had been postponed. However, peoples’ enthusiasm was so great, that the rumour mills soon died, and the SLF started on schedule. 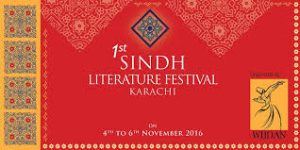 Sufi singer Abida Parveen cut the ribbon at the launch, alongside SLF organising committee chairperson, Abdullah Hussain Haroon, and other members, Naseer Gopang, Ali Akash and Bakhshan Meranvi. In his speech, Haroon talked about the poetry of Shah Abdul Latif Bhitai, politics in Pakistan, and in the session that followed, voiced his opposition to Karachi’s separation from Sindh.

Sardar Ali Shah, Sindh’s minister for culture, resolved that his department would support the SLF as all such activities fell into the domain of the culture department. And Dr. Suleman Shaikh said that Sindh has stayed intact from time immemorial and would remain so, because it is capable of facing all the difficult times it is confronted by. The session was moderated by Dr. Arfana Mallah, whose fluency in Sindhi and English made it easy for the audience — which ranged from foreigners, to diplomats, to common folks — to understand what was being said.

On the second day of the festival, a session titled ‘Qualitative Higher Education and Our Universities’ was held on the main lawn of the hotel. The invited speakers included vice-chancellor, Shah Abdul Latif University, Mazharul Haq Siddiqi, Khairpur Mirs, ex-vice chancellor, Sindh University, Dr. Parveen Shah, and vice chancellor, Sindh Madressatul Islam University, Dr. Muhammad Ali Shaikh. However, apart from Dr. Shaikh, none of the other speakers were able to attend the event. Dr. Shaikh criticised the quality and standard of universities in Pakistan, disclosing that no Pakistani university was listed among the top 500 universities of the world. 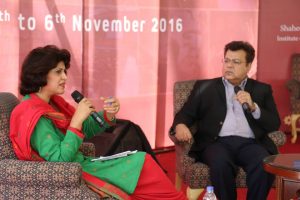 Dr. Shaikh’s discussion was so lengthy that it spilled over to another session’s schedule. As a result, there was only limited time left for participants to ask questions. Only three questions were taken, of which two were partially responded to, and one was avoided altogether. The latter was raised by a student who asked to what extent teachers’ bodies could be held accountable for the closure of campuses. He added that students’ parents asked them how they could study in institutions where teachers attempted to shut down classes to pressurise the administration to cater to their demands.

Jami Chandio and Wusatullah Khan also spoke in another session that day. Chandio spoke about the Sindhi language, its importance and its ability to evolve to suit changing times. He quoted Shah Abdul Latif Bhitai to support his arguments. Khan, meanwhile, criticised certain insensitive trends in the print and social media. He was of the view that trends such as ‘breaking news,’ ratings and the journalists’ rush to be ‘there’ damage the quality of news. He also spoke about how the ‘instantaneousness’ of social media could not replace the multidimensionality of a story, which can only happen when it is built up, layer after layer. 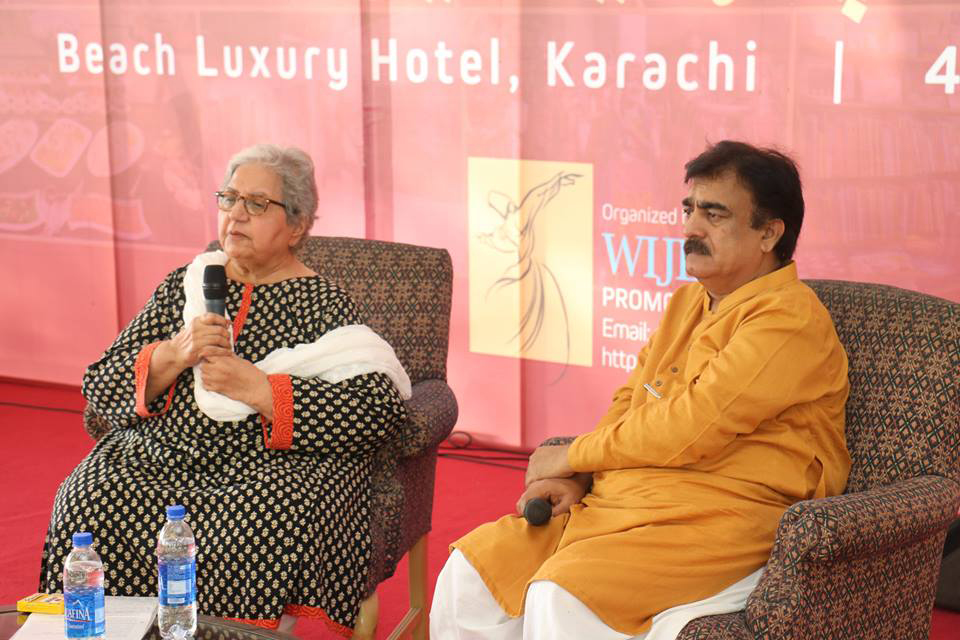 Dr. Hamida Khuhro, in conversation with Dr. Ayoub Shaikh, made for a thought-provoking session. Khuhro said that in the first half of the fourth century, Sindh was a relatively prosperous colony of the Persian Empire, paying up to one third of the empires’ revenue. During the reign of the Talpurs, Sindh was divided into princely states, and later, it was conquered by the British, remaining in its fold till 1947. Following independence, Khuhro said, Sindh had retained both, the positive and the negative impacts of colonisation. She appreciated the role of Lord Curzon, who secured Sindh’s water share when the canal colonies were being built in the Punjab and as a result of which the Sukkur Barrage came into being. 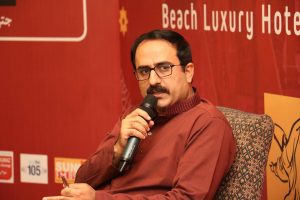 Sunday, November 6 was the last day of the festival, and it proved to be the richest in terms of participation and quality of sessions. Two sessions attracted a large number of participants. The first, a talk on the ‘Archaeological Importance of Karachi,’ and the second, the book launch on the life and works of Muhammad Ibrahim Joyo: Sindh Jay Jadeed Shaoor Jo Adeendarr, authored by Professor Aijaz Qureshi.

In the first session, Gul Hassan Kalmati claimed in his talk that some artefacts had been found around Karachi’s coast, with signs, symbols and figures similar to those on the relics found in Moenjodaro and Harappa. He emphasised the city’s ancient origins by stating that before the advent of Islam, it is known that the worship of crocodiles was practiced in Karachi and its suburbs.

Professor Aijaz Qureshi introduced his book, by saying that Joyo is a legend who has nurtured generations of Sindh and has oriented them about history, philosophy and literature.

He continued, saying that Joyo had, at a very young age, realised that feudalism was the main cause of Sindh’s suffering. So, he went on to write a thoughtful book, Save Sind, Save the Continent from Feudal Lords, Capitalists and their Communalism. It appeared in 1947, when he was around 32 years old. And responding to a question he said that Joyo always upheld secular ideas and believed in establishing a plural and egalitarian society.

Another well-attended session featured Mohammed Hanif’s talk. He was speaking with Gobind Manghwar, a development consultant, on the ‘World View of Modern Creative Writing,’ but in the course of the discussion, switched from speaking about writing literature, to politics, specifically the politics of violence and blackmail. He referred to the case of Wahid Baloch, who has not been seen or heard of since he was picked up by unidentified plainclothesmen. 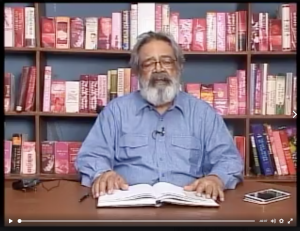 In the last session of the event, Amar Jaleel conversed with Asghar Soomro, and bluntly responded to some questions posed by the participants. In sum, he asserted that Sindh remains enslaved by pirs, sardars, Khans and Syeds. Afterwards, he read a short story he had written, artistically flavoured with satire and derision, and received hearty applause from the young audience present. One of the participants, commented, “the unending clapping proves that Amar is still a writer of romance, nonconformity and resistance.” When he finished his short story he received a standing ovation.

The SLF programme comprised more than 50 sessions. But in some sessions, the assigned moderators declined to attend, and in others the lead speakers did not turn up. Nonetheless, the festival succeeded in involving people from various walks of lives and different ideologies. The presence of youth, especially young girls studying in the private colleges and universities of Karachi, was a welcome addition to the audience. And equally heartening, was the fact that on the last day, people turned up along with their families. 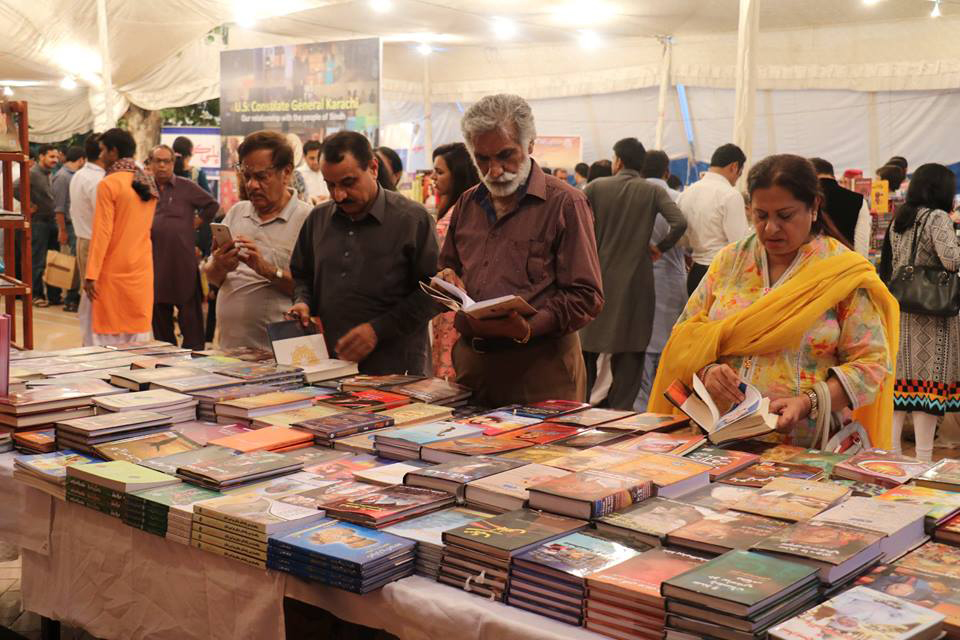 The event ended in the late hours of Sunday night, with a resolved commitment by the organisers to continue with this endeavour. They also chalked out future plans, and announced that through the SLF, literature, language and art would be promoted. They contended that the second edition of the festival would be even more inclusive, and would accommodate the diversity of cultures and the plurality of languages of Sindh’s citizens.