Cash-based economies face persistent threats from counterfeiters who, for obvious reasons, prefer dealing in fake currency notes of higher denominations. On the other hand, genuine currency notes of higher denominations are also favoured because they make it a lot easier for the corrupt to hoard their ill-gotten black cash and for antisocial elements to indulge in their nefarious pursuits with relative impunity.

The circulation of fake Indian currency notes is said to have turned into a very serious problem in recent years and, at the same time, the size of the black economy is reported to have grown close to the size of the white economy. To tackle the two hazards in one go, the Indian government decided in early November to withdraw currency notes in denominations of Rs. 500 and Rs.1,000.

Currency demonetisation, no matter what its long-term consequences, is likely to cause economic upheaval of gigantic proportions in the short run. That is why this measure is used only sparingly to drain out the black economy or/and to get rid of fake currency. The cost -benefit ratio of the measure is calculated very minutely and all kinds of economic, social and political precautions taken before taking the leap into what remains unknown territory, no matter how good the calculations.

Indeed, contrary to common perception, all black money is not hoarded in cash. Most of it is held in goods, in clandestine businesses, in real estate and in gold and jewellery. Therefore, demonetisation alone is not expected to yield the desired results. On the other hand, it is almost impossible to determine the percentage of fake currency in the sea of cash in circulation. Using the demonetisation method to drain out fake currency is an overarching measure not best suited to dealing with a limited problem. It can cause suffering and trauma to millions living below the poverty line who deal in cash for survival. Some far above the poverty line in India do not use the banking system either, so the measure affects huge numbers.

In India, as in Pakistan, cash is used in an estimated 78 per cent of transactions, compared with 20 per cent to 25 per cent in developed countries like Britain and the US. And the joke appears to be on the suffering masses, because while large denomination notes (Rs. 500 and Rs. 1,000) are being demonetised to take care of black cash hoarders, they are being replaced by new Rs. 500 and Rs. 1,000 notes, along with the introduction of a larger denomination note worth Rs. 2,000. This will make hoarding black money even easier after the current demonetisation process ends.

Consumer spending is expected to slow down, as it would take some time for the new notes to make their way into circulation. According to some independent economists, the shortage of cash due to demonetisation could result in a drastic slowdown in Indian GDP growth for 2016-17, down to 3.5 per cent from an earlier projection of 6.8 per cent.

Other analysts have predicted that the second half of this financial year will see Indian GDP growth of only 0.5 per cent, down from the 6.4 per cent forecast in the first half of the year. Official estimates for the first quarter of the year pegged GDP growth at 7.1 per cent, the slowest in six quarters. 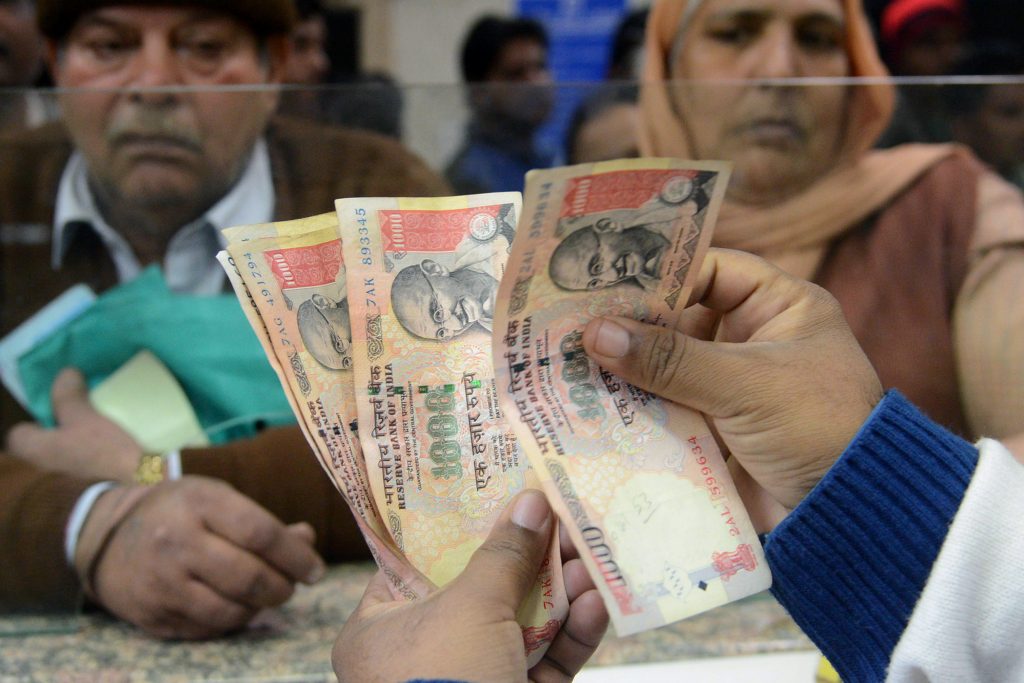 One effect of demonetisation is expected to be the transactional hit created by a hard cash deficit, as banks are unable to replace the demonetised cash expeditiously. This is bound to have a paralysing effect on economic activity in the short run.

Small businesses in the informal sector are becoming unviable and the effect on the real estate sector could be severe, based on estimates that 30-40 per cent of the value of purchases take place using black money.

K.C. Chakrabarty, deputy governor of the Reserve Bank of India (RBI) between June 2009 and March 2014, was quoted by the Indian media as saying that there was no economic rationale behind the ongoing demonetisation drive and that it did not serve any purpose. In his opinion, the best way to tackle black money was for the law enforcement authorities to identify and apprehend tax evaders and dealers in counterfeit currency.

During India’s 1978 demonetisation scheme, 25 per cent cash held by the public did not return to the banking system. One economist said that if it is safely assumed that 25 per cent of the cash in hand would be retained this time as well, the actual unaccounted cash not coming back to the system could be significantly higher than Rs.2,500 billion.

Bank customers, who have been struggling to access funds from savings accounts in the wake of the demonetisation, now face the prospect of earning less on their deposits as banks awash in liquidity have lowered deposit rates.

The State Bank of India (SBI) has cut deposit rates by 0.15 percentage points on some maturities. The country’s largest lender will now pay 6.9 per cent for deposits made for periods ranging from one year to 455 days, compared with the 7.05 per cent offered earlier. ICICI Bank, the country’s largest private-sector lender, also reduced deposit rates by 15 basis points. The bank will now offer 7.10 per cent on deposits for 390 days to 2 years as compared with the 7.25 per cent offered earlier.

Deposits in savings and current accounts are considered low cost deposits, since they offer lower interest rates, which in turn help reduce banks’ cost of funds.

While deposits have been pouring in, some funds are likely to be withdrawn once the currency note situation returns to normal, as some of this money belongs to the category of cash that households typically keep aside for emergencies.

According to the official Indian government announcement, the legal tender character of the existing bank notes in denominations of Rs. 500 and Rs. 1000 issued by the Reserve Bank of India till November 8, 2016 stood withdrawn. In other words these currency notes cannot be used for transacting business and/or stored for future usage. These notes were allowed to be exchanged for value at any of the 19 offices of the Reserve Bank of India or at any other bank branch, head post office or sub-post office. 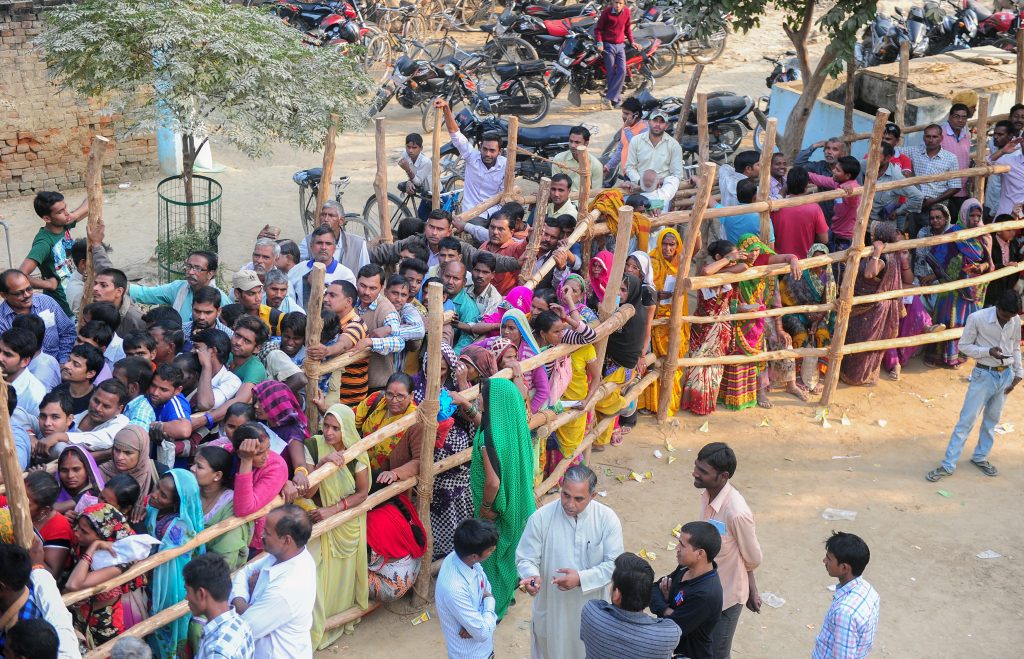 Indian villagers queue outside a bank to exchange bank notes

At the time of exchange, each person would get up to Rs. 4,000 in cash irrespective of the size of tender and anything over and above that would be receivable by way of credit to bank accounts. Those who require more than Rs. 4,000 for their needs are allowed to issue cheques or make payments through electronic means such as internet banking and credit/debit cards etc. Those who do not have bank accounts could open one by approaching a bank branch with necessary ID documents.

Once the ATMs became functional, cash up to a maximum of Rs. 2,000 was allowed to be withdrawn from ATMs per card per day up to November 18, 2016. The limit was raised to Rs. 4,000 per day per card from November 19 2016 onwards. After November 24, cash withdrawal against withdrawal slip or cheque subject to a ceiling of Rs. 10,000 in a day within an overall limit of Rs. 20,000 in a week (including withdrawals from ATMs) was allowed.

The scheme closes on 30th December 2016. For those who are unable to exchange their notes on or before December 30, 2016, an opportunity will be given to them to do so at specified offices of the RBI, with necessary documentation to be specified by the Reserve Bank of India.

To pay for hospitalisation charges at government hospitals, purchase bus tickets at government bus stands, train tickets at railway stations, and air tickets at airports, the old notes were allowed to be used but within 72 hours of the notification.

Meanwhile, the Indian Supreme Court had warned that there “may be riots” and refused the government’s plea to stay cases filed against demonetisation in High Courts and lower courts across the country, saying, “How can we shut our doors to people when there is a problem of such magnitude?”

Several measures were announced to ease the burden on farmers. To ensure sowing in the Rabi season, the government has allowed farmers to withdraw Rs. 25,000 a week against crop loan/kisan credit cards. Traders in agricultural mandis were permitted to draw Rs. 50,000 in cash per week to pay for sundry expenses like wages. While the time limit for payment of crop loan insurance premium was extended by 15 days, government employees up to Group C have been given an option to draw salary advances in cash.

To stop repeat money exchange with invalid currency notes, banks applied indelible ink mark on the right index finger of customers in select metro cities. Following the move, the Election Commission asked the Central government to continue its use of indelible ink at banks, but in keeping with the EC’s directions.

The exemption deadline for all those services allowed to accept the old Rs. 500 and Rs. 1,000 notes was extended to November 24. These services include petrol pumps, pharmacies, and utility services amongst others.

Parliament saw repeated disruptions over the issue. Both Houses ended up being adjourned on the second day of the winter session after Congress leader Ghulam Nabi Azad compared deaths due to the disruption caused by the demonetisation measure to those in the Uri attacks. Minister of State for Parliamentary Affairs, Mukhtar Abbas Naqvi, demanded an apology from Mr. Azad, stalling business further. Naqvi alleged that Azad’s statement had given a message to the country that Congress was sympathetic to terrorism and asked why it was so agitated when the demonetisation drive was only meant to hurt black money hoarders.

It seems that not much is likely to be gained in economic terms, in the aftermath of the demonetisation of larger valued currency notes. However, the social and political upheaval unleashed in the country may help to divert attention from the bloody happenings in Indian-administered Kashmir and the BJP government’s unsubstantiated claims of surgical strikes across the
LoC.