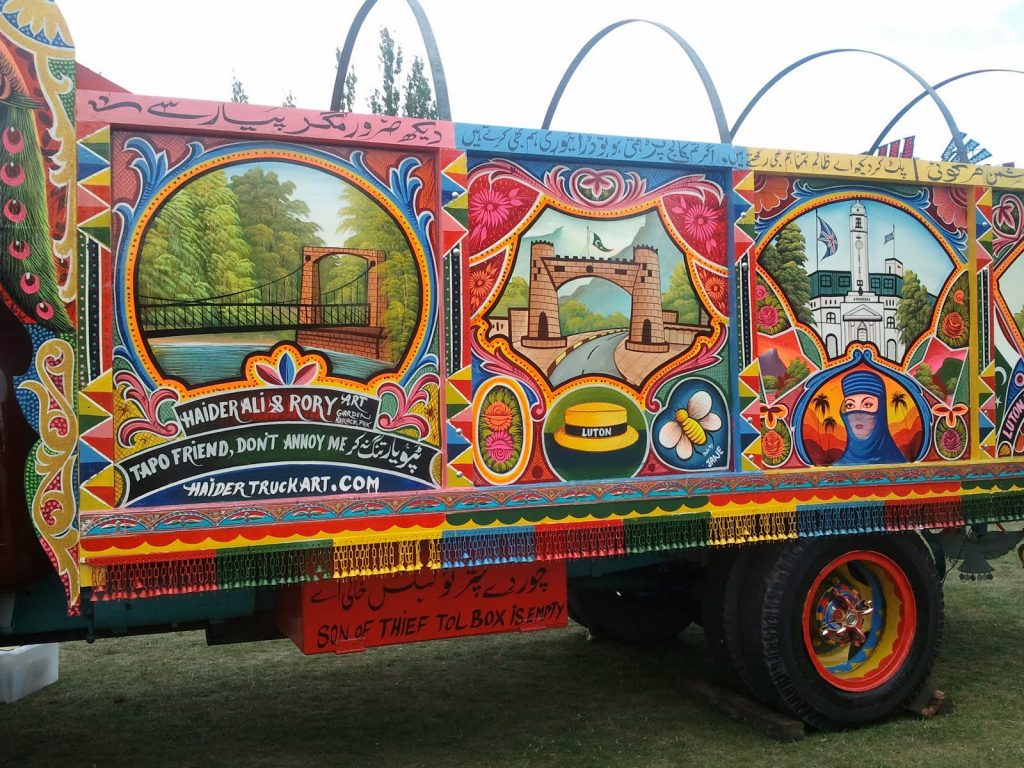 My first awareness of Truck Art dates back to the ’70s when, as an art student at the Central Institute of Arts, I visited its biggest adda in Lyari, with Rashid Arshad, our lecturer. The trucks were packed like sardines on an oil-soaked ground and a strong smell of Mobil oil, mingled with fish meal, rent the air. What struck me most was the stark contrast between the surrounding squalor and the brightly painted vehicles. 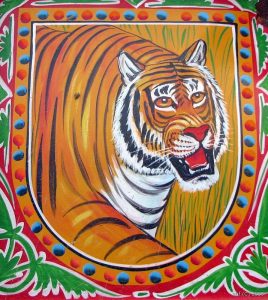 This was the time when Truck Art had only just begun to enter the consciousness of artists and art enthusiasts. Now, three decades later, it has evolved into one of the most popular forms of public art in Karachi. You can see it extensively on the city’s bridges and walls, besides the trucks buses and rickshaws from where it originated. Hyder, the pro-active truck artist, should be credited with its popularity as he has taken it off the truck and converted it into an urban folk art that can embellish anything, anywhere. Hyder travels far and wide to complete commissioned works he has undertaken across the globe. He and his team are, in a sense, the country’s ambassadors-at-large. The bright colours and stylised motifs of truck art seem to hold popular appeal. The last time I stepped into the Swiss Consul General’s office in Karachi, I saw a customised mural lighting up the interior. Truck Art can now be found on suitcases, furniture, utensil and crockery. And it’s now even seen on the catwalk — it has served as a source of inspiration for high-end designers like Maheen Khan.

However, what I want to share with you is a different experience of Truck Art on a road trip to Hunza. Untouched by the developments in cities, this art reflects another sensibility. I found the tiger, the stallion and the red rose on hundreds of trucks that journeyed with me through Khyber Pakhtunkhwa to the stone valleys of the Northern Areas.

These moving galleries on wheels offered life-size images floating in waves of colour. Slowly the compositions gave up their creative code and the grid of wooden slates surfaced as the artist’s guiding matrix. His masterly strokes in blue, red and orange were often tweaked with fluorescent pinks and lemon in preparation for a nocturnal celebration. In the end, all this skill and indulgent palette seemed to converge on three pivotal motifs: the tiger, the stallion and the red rose. 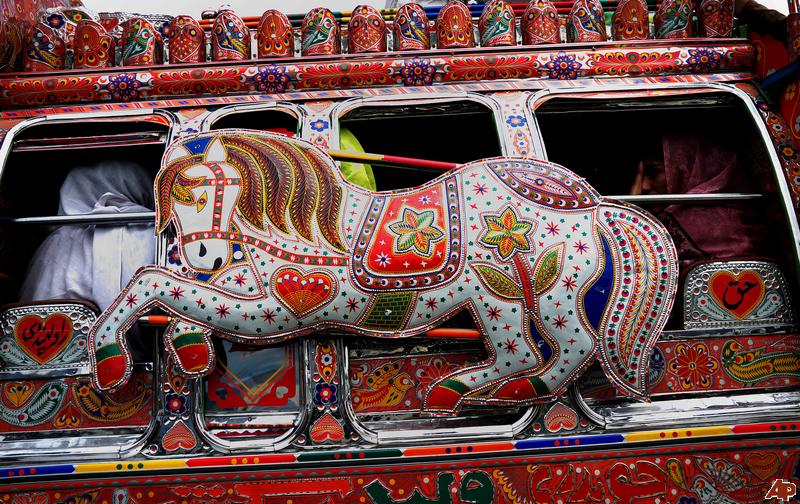 Each of these icons had a special place on the vehicle. The tiger was invariably painted under the loading deck in a wide horizontal frame. Viewed from close quarters the tiger’s eyes appeared more watchful than predatory — a beast tamed by the painter’s brush. The stallion, always in full gallop with fore-legs raised, was reminiscent of a dancing horse — a popular folk image. His movement was frozen in a heavily-tooled metal collage which proudly embellished the truck wall like a shield.

However, it was with the beloved red rose that the artist emerged at his creative best. Organised in endless rows, as a filler or the protagonist, the red rose was evocative of a garden that lives on in memory. 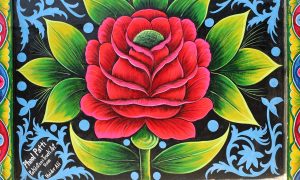 Travelling with these icons and seeing them against the transforming landscape, one was compelled to reflect on their place in popular imagination. These visual mantras accompany the vehicles through dusty bazaars, and on precarious bridges and roads carved into some of the world’s highest mountains. It is here, that the truck driver, forever on the move, forever the outsider, seems to strive for a space to connect with something within, through a favourite couplet, a prayer and familiar emblems of bravery, speed and beauty.

A Karachi-based truck painter once told me that often the cost of producing these images becomes immaterial when a driver is keen to have his favourite design recreated on his vehicle. Similar conversations with other painters gives further insight into what binds the patron with the image. The polo matches in the shadow of the Karakorams take you back to the people’s Mongol roots, when warriors slept on horsebacks. The snow-clad abode of the tiger, shared by mountain men, makes the beast their symbol of bravery and survival. In the grey and beige dusty desert of Baltistan, the rose-bush in its spring bloom of lush red has an aroma that steers the senses. The truck drivers and painters carry these images of beauty and courage as they travel up and down the highways of Pakistan.