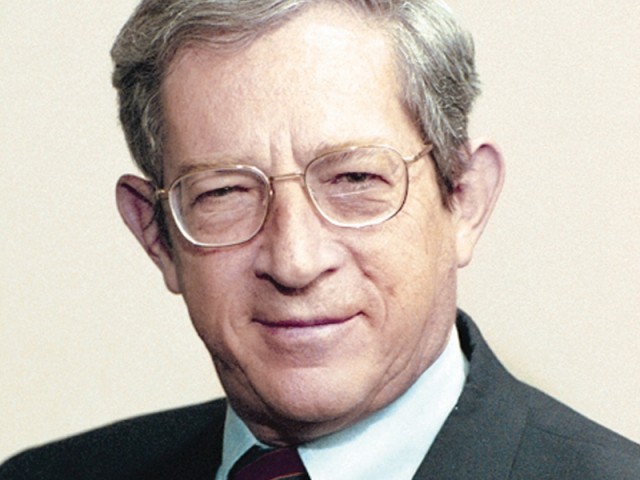 +This book is a substantive and significant contribution to discourse on its subject by one of the most astute scholars on contemporary Pakistan and India. Researched extensively — though not necessarily comprehensively — the book is relatively slim (196 pages, excluding Notes, Index and other parts), neatly structured in seven major chapters with several sub-sections in each. Written with clarity and candour, it is easy to read and difficult to set aside.
There is a kind of inevitability about the subject and scope of the book. Prior works by Stephen P. Cohen include The Indian Army (1971); The Pakistan Army (1984, 1998); India : Emerging Power (2001); The Idea of Pakistan (2004); Arming without Aiming: India’s Military Modernization (with Sunil Das Gupta) (2010); and The Future of Pakistan (with others) (2012).

As perhaps the most astute analyst in the USA of South Asia in general and of the two largest countries of the region in particular, he now sets his sights on a future( by 2047) that cannot be precisely predicted but some of whose formative factors are already evident.

A curious ambivalence pervades. Where there is considerable knowledge and a large-scale vision, there are occasional major and minor errors of facts and interpretations. Replete with candid, insightful perceptions and some constructive, prescriptive proposals, the book also contains certain assertions which are outright howlers.

Six of the seven chapters have one-word titles that aptly prepare the reader for the final chapter. They are: Context, Conflicts, India, Pakistan, Explanations, Prospects. By concluding with a chapter titled: “American Interests and Polices,” an initial impression is likely that the whole perspective is too America-centric. But to the author’s credit, his ability to remain independent of his American national identity comes through strongly in his frank, forthright criticism of how the US policy apparatus for South Asia has often been severely deficient and dysfunctional. He even says it is presently “rudderless,” and that the capacity of the Indian Ministry of External Affairs to generate new ideas has “atrophied.”

In the historical sections of the first six chapters, specially those covering the past three decades in which religious extremism has assumed virulent and violent forms, there are inadequate references to the growth of Hindu extremism in India, particularly before and after the 1992 Babri Masjid episode (except at one point in the Notes on page 201).

There is no acknowledgement of the vital distinction that religious extremism in India receives popular electoral reinforcement through the emergence of BJP at the national level. Whereas in Pakistan, religious extremism has never secured mass electoral validation.
Recurring indicators appear of the laudable attempt to be even-handed and balanced. All three principal protagonists i.e. India, Pakistan and, as a past and potential interlocutor, the USA, are evaluated by their respective realities, policies and actions as they appear to exist in the established narratives of discourse. Yet absent is an acceptance of the enormous odds that Pakistan, unlike India, had to overcome, in its crucial initial existence of 24 years between 1947 and 1971.

This is not to make a case for victimhood. It is to point out that even during frequent references to the two countries as they exist in the 21st century there is a lack of recognition of the comparatively more formidable challenges which Pakistan faces in the process of nation-building and state-building.

Despite the wide and credible range of source material cited in the Notes, there is a tendency to be selective in quotations and references with a (possible) bias to bolster pre-conceptions, not to re-examine presumptions. In this respect, the book sometimes regrettably mirrors the conventional intellectual narrative which tends to demonise Pakistan. This is the narrative carefully fostered by western and Indian academia and media (and echoed by some sections of our own media, academia and society) which has been embedded into political and pubic perceptions. For example, we are seen as people who “hate “ those other two! Whereas American multinational brands in various fields and Indian movies and music attract sizeable non-violent audiences and growing profits in Pakistan, virtually unaffected by drone attacks and a neighbour’s defamatory assaults.

Cohen has an exceptional gift of making graphic, evocative observations. Comparing the Siachen dispute with the Falklands, he sees: “two bald men fighting over a comb.” Referring to the collective memories of Indians and Pakistanis, he writes : “… over time, the ‘facts’ of history — real or imagined — become as hard to change as geography.” Apprehending perpetual tension as one of multiple scenario-options, he writes : “This is a conflict that Pakistan cannot win and India cannot lose”, that the two countries “… are like two gladiators locked together, each holding a nuclear weapon that cannot be used at closed quarters…”. At another point, he asserts that the position often taken by Pakistan in asking for help from America and others looks as if the country is holding a gun to its own head.

On pages 106/107, he lists the large number of constructive and innovative peace proposals made by both the civil and military leaders of Pakistan to help resolve bilateral conflicts with India. He suggests several progressive and helpful initiatives that India, Pakistan and America can take to attempt a new era of reconciliation.
Whether calling for a re-definition of “Dehyphenation” (the policy developed by both Clinton and Bush Jr. to engage separately with the two countries rather than view them as conjoined adjuncts to a single America) or to urge the USA to be more even-handed with Pakistan for civil nuclear co-operation or even to promote the favourite Indian campaign for strategic trilateral co-operation in Afghanistan, Cohen brings the book to a thoughtful and supportive climax.

In unfortunate contrast to the author’s vast study of South Asia, there are several contentious, incorrect judgements made about Pakistan and Kashmir. The following observations, by turn, at different points in the book perplex and distract:

(a) page-14: It is claimed that the pre-1947 Pakistan Movement was weakest in provinces such as Sindh. Whereas the largely-attended First Sindh Muslim League Provincial Conference held in Karachi 8th-10th October 1938 — 18 months before the Lahore Resolution of March 1940 — adopted Resolution no.5 on the two-nation dimension. This was the first time that a Muslim organisation anywhere in South Asia articulated a division on the basis of religion.

(b) page-28: Sri Lanka and Nepal are credited for the goodwill effort of initiating the formation (in 1985) of SAARC (South Asian Association for Regional Co-operation) whereas the regional forum was first proposed by President Zia-ur-Rehman of Bangladesh in 1980.

(c) page-120: Referring to the Lahore-based Pakistani cinema sector’s attempts to make inroads into Indian audiences, actors Waheed Murad and Shabnam are named in the present tense (in 2013). Waheed Murad passed away in 1983. Shabnam migrated to Bangladesh in 1999;

(d) page-110: It is claimed that: “Musharraf’s own standing in the army was shaky after his coup, and that an officer with a different background (he was a non-Punjabi born in India and raised partly in Turkey) might have had more support among his colleagues.” However, it is well-known that, while Musharraf was still air-borne on 12th October 1999 when his dismissal was announced by Prime Minister Nawaz Sharif, uncertain about whether he would land safely in Pakistan, generals on the ground (most of them Punjabi or Pakhtun) actually conducted the coup. Musharraf remained COAS for eight years without an internal challenge. Another previous non-Punjabi COAS, General Mirza Aslam Beg, also served out his full term.

(e) pages 149 and 153: Dealing with unofficial efforts to promote improved bilateral ties, fundamental inaccuracies occur in the text with regard to the longest-running, uninterrupted, deliberately quiet, non- media-reported Pakistan-India Track 2 Dialogue known as the Neemrana Initiative that commenced in late 1991 and with which this reviewer is associated since 1992.

(f) page 221, in the Notes to Chapter 7: It is stated, “While Pakistan provided no assistance to Afghanistan, India’s aid programme came to about a billion dollars.” Whereas, Pakistan provides almost half a billion dollars (about $ 450 million) of aid to Afghanistan, as per the Foreign Office. Pakistan also ‘pays’ a very high, unrivalled price for enabling most of landlocked Afghanistan’s imports to be transported through Pakistan, and for large volumes of these imports being smuggled back into Pakistan. Not to forget the enormous price Pakistan has been paying for about 30 years for hosting two million Afghan refugees.

(g) Perhaps the most questionable assertion comes on page-117 with the statement that the Zardari Presidency (2008-13) “… [was] the best government that Pakistan has ever had…” Notwithstanding the commendable passage of the 18th Amendment and the 7th NFC Award and a few other legislative achievements, the same presidency, unjustly combined with a partisan political party co-presidency abetted public sector institutional decline on an almost catastrophic scale. Corruption, nepotism and mis-governance reached unprecedented levels.

Regardless of whether such observations reflect an inadvertent disregard of some hard facts, insufficient verification of claims before publication or whether
distance lends distortion to the view, Shooting for a Century is essential, strongly recommended reading for everyone interested in the single-most complex bilateral relationship of any two nation-States on this planet.