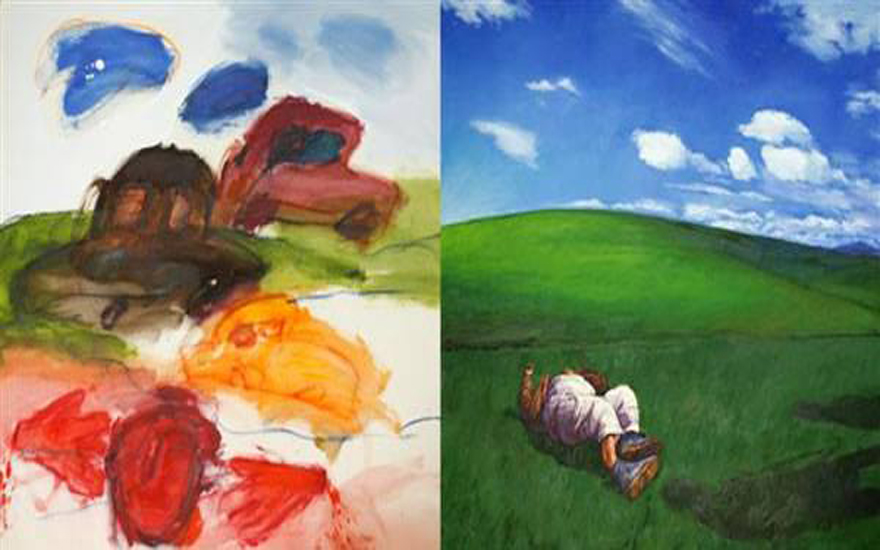 Walking through Canvas Gallery this October and examining the new pieces by Quddus Mirza that were on display proved to be a contemplative and surprising experience. Four canvases were up on view, each looking like a child’s finger-painting featuring blurred shapes, primary colours smudged all over the place and yet plenty of white spaces as well. But still the paintings were deeply disturbing: Houses were on fire, figures were throwing their hands up for help, bloodshed and death came out at me from every angle. It seemed as though the world was being viewed from the lens of a child going through very violent circumstances but powerless to change them. The victim does not fully understand the situation but is aware that it is grotesque, repulsive, and dangerous; he can only watch as the world spins chaotically around him. It’s a complex emotion, but something most Karachiites will be able to relate to very well. 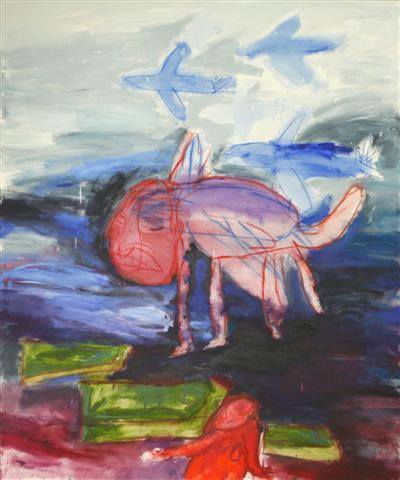 “It seems very childlike, but a child couldn’t make this,” said Mirza. Certainly there was nothing infantile about the content of the collection. Violence, especially that which occurs in Karachi, was the key theme here. The four pieces on display depicted different experiences of violence centred around the same few figures.
‘Caravaggio in Karachi’ was a modern version of Caravaggio’s ‘Judith Beheading Holofernes’. The same scene, two figures beheading a third, was rendered in a completely different style. The Baroque master’s focus on naturalism was missing but the same drama, bold contrasts and a gritty, realistic theme were present. At the bottom of the painting, there is a sketch of a house in flames. ‘Karachi in Caravaggio’ upends the scene in the previous painting. Here, the decapitated head takes centre stage, laid on a platter as if for serving. The figures in the background are deepened to a deep red and the house on fire in the foreground also becomes a mere outline. Both paintings showed premeditated violence rooted in a domestic environment, but spilling over from and to outside the home. It appears that the conflict is all encompassing in the first painting and more of a personal experience in the second. In both cases, the figures — except the victim — seem desensitised to the repulsive scenes surrounding them, and in fact appear willing to participate in the horror. 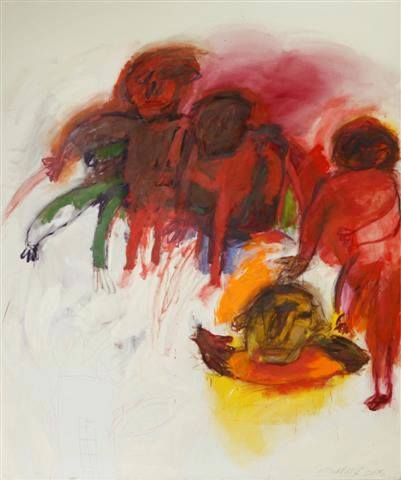 At first glance, ‘MS World’ seemed the most uplifting piece of the collection — half of the canvas showed bright cars speeding along a road, while the other half depicted a man lying on the grass in a beautiful landscape. However, up close the painting communicated a distinct sense of doom. The man on the grass was sprawled unnaturally, almost like a corpse, and two shadows lurked at the corner threateningly. The cars rushing by obscured the beauty of a park in the background and a figure in the foreground raised its arms in confusion or horror.

‘Soul and Other Flying Machines’ was even more disturbing. The painting featured a giant insect-like creature with a human face floating among airplanes that have leering shark-like faces. Below them are a red figure and three coffin-like boxes. Here, the background is completely murky and it seemed like the aftermath of all the events shown in the first three paintings. With the violence over, all that is left for the victims is to give themselves up to darkness and death. But even then, there is no respite, no dignity.

There was a strong sense of hopelessness and desperation in the show, but the paintings had their finger right on the pulse of Karachi as it is today. It was a mature, confident collection and while these themes have been explored many times before, Mirza managed to still create something original and thought provoking.