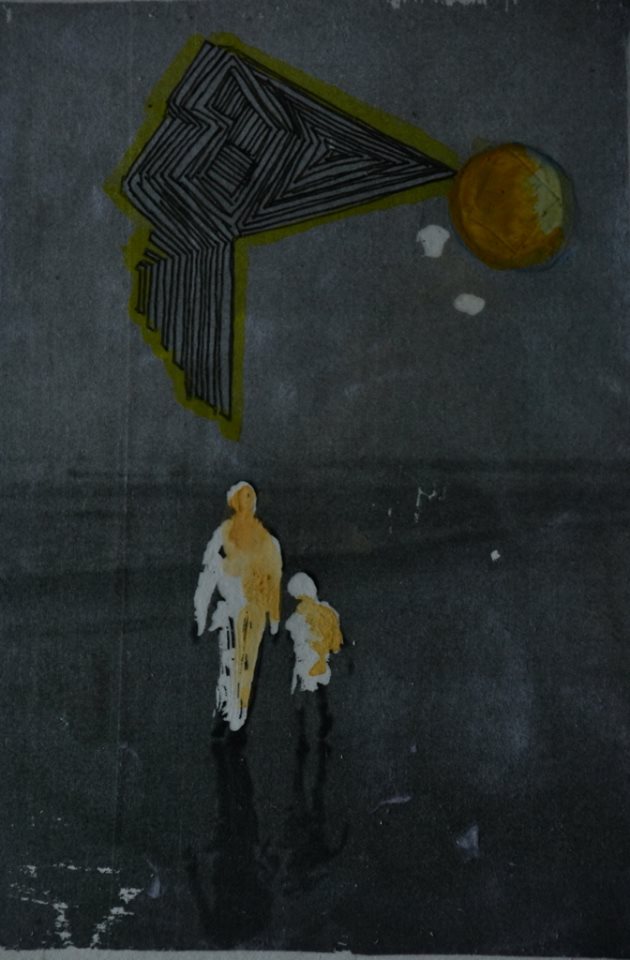 Four visual arts students, belonging to different artistic schools of thought, traditions and various colleges from across the country, came together to showcase their artworks at the Indus Valley School of Art and Architecture, in an exhibiton titled Analogical Paradigms. Curated by printmaker Hajra Haider, the show featured an assortment of mediums, but the artworks had one common theme: memory. To emphasise the importance of specific memories, the artists overlapped and superimposed images over each other.

For example, Naira Mushtaq from the National College of Arts in Lahore, transfers collage pieces onto old photographs that give a sense that, although the subject is present in the photograph, their mind is drifting elsewhere, in another dimension; her use of geometric patterns also give the works a slightly science-fiction or otherworldly effect. In ‘18-5-1989’ (the title of Mushtaq’s works are the dates the photographs were presumably taken on), a father and child can be seen walking along the sea-side, with the sun blazing overhead. The image is grey and drab, like a hazy memory, except for the amber colour — hand-painted on the photographs — of the sun, which is reflected on the bodies as well, showing how the warmth of the sun and her father’s presence is still clear in the artist’s mind.

On the other hand, Indus Valley graduate Hamida Khatri’s bright-coloured, digital prints use the female body to offer a commentary on society’s misogyny, and the burden of femininity. The images are quite graphic and violent, despite their non-serious, pop-art feel, with dismembered body parts, self-mutilation and blood featured in them. In ‘The Other Day,’ two female figures can be seen holding knives to their breasts, as if to discard and cut off their feminity, or the memory of a traumatic event associated with them.

Kamran Kashkakhel, hailing from the Centre of Excellence in Art and Design (CEAD) in Jamshoro, explores time and movement in his oil on canvas, titled ‘Speed,’ which is shaped as a rear-view mirror and depicts a blurred landscape. Viewers can almost ‘feel’ the motion of time whizzing past, and the futility of trying to look back in retrospect or attempting to capture a fleeting moment.

And lastly, Nabeel Majeed Shaikh from the Karachi School of Art uses paper as his medium to create three maps of Pakistan, titled ‘1947’, ‘1971’ and ‘2013.’ Paper mice (in place of men) create a circle, guarding the country. However, in each subsequent map, the circle becomes smaller as a group of mice deflect, highlighting the lack of unity. Shaikh’s works were the only ones in the exhibiton that went beyond the personal and contained political undertones, hinting at the collective memory.

The works tend to evoke feelings of discomfort, ecstasy or tranquillity in viewers, who are forced to take a step back and reflect on the message the artist is trying to convey.