Few films in Pakistan garner as much controversy as Waar (‘to strike,’ in Urdu) has managed to in the days following its release, with numerous articles condemning its less-than-subtle propagandist overtones, or praising its anti-terrorism narrative. On Twitter, anyone who criticised the film had to face a slew of abuse and accusations of ‘ghaddaari’ for not supporting a well-made Pakistani production, or for being easily offended/overly sensitive liberals. Rumours of ISPR funding are doing the rounds — something the makers of the film strongly deny. And across the border, Waar is simply known as the ‘anti-India’ film doing roaring business at the Pakistani box office. 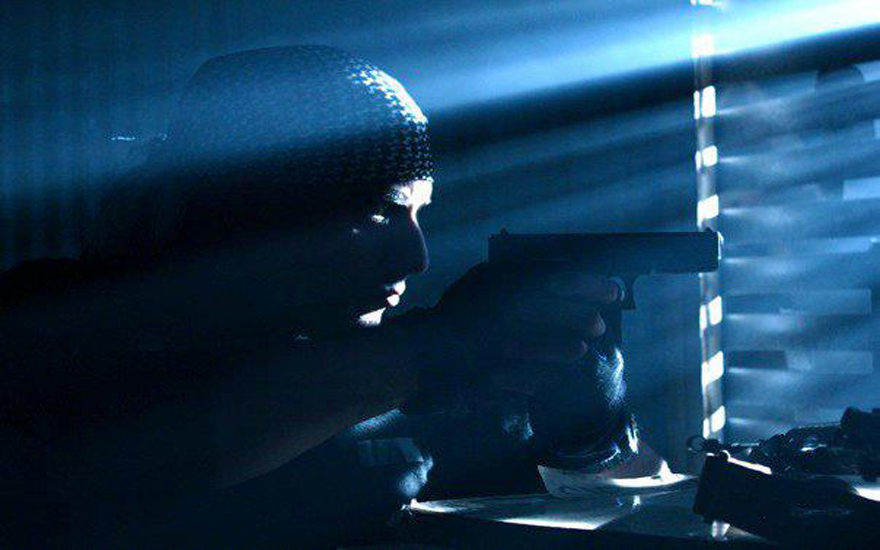 If director Bilal Lashari — who has many impressive music videos to his credit, including Mekaal Hassan Band’s Chal Bulleya and Jal’s Sajni — wanted to get a ‘conversation’ rolling with his first feature film, he has certainly succeeded.
The film centres around Mujtaba (Shan Shahid), a retired, no-nonsense army officer with a troubled past. He is called back to duty for a counter-terror operation, led by police officer Ehtesham (Hamza Ali Abbasi) and his sister, Javeria (Ayesha Khan), an intelligence official. The police, military and intelligence agencies join hands to stop a massive terrorist operation that will put all other terror-related incidences to shame. Their enemies are the Pakistani Taliban, led by a Hakimullah Mehsud-styled militant and his army of “little angels” (brainwashed youth). The Taliban are paid by RAW agents, Rammal (Shamoon Abbasi) and Laxmi (Meesha Shafi), who have only one agenda to fulfill: the destruction of Pakistan, by any means necessary.

Rammal and Laxmi, who disguises herself as a Pakistani social worker (as if there isn’t enough suspicion of NGOs in Pakistan), are villains in the true sense, with no grey-areas or redeeming qualities; they relish the violence and death they inflict. When two female suicide bombers prepare for ‘martyrdom’ by blowing up the police headquarters in Islamabad — one of the most chilling scenes in the film, and based on the real-life attack on the Manawan Police Academy in Lahore in 2009 — the two agents dance a tango of death. 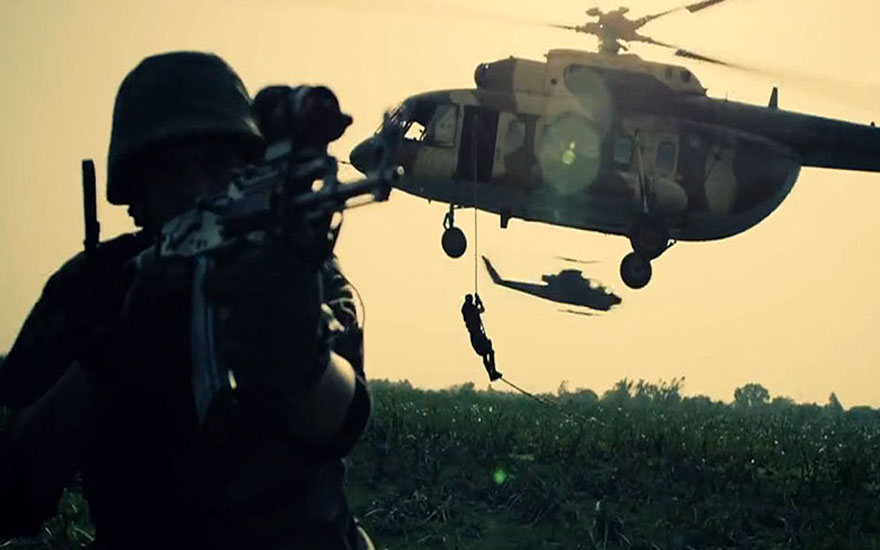 As for the Taliban, it is interesting — and wise on the writer’s part — to strip the militants of all religious authority. These are men motivated solely by greed and an irrational hatred, rather than by any religious calling. Instead, the religious sloganeering and motivation is left to the Pakistani armed forces. 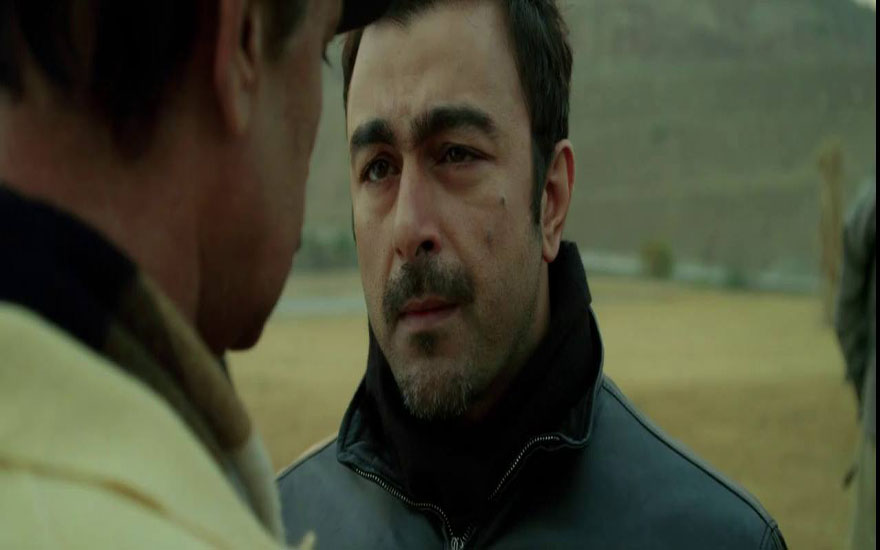 Then there’s the well-meaning but slightly naive politician Ejaz Khan (Ali Azmat), partially modelled on Imran Khan, who wants to see a dam built because he believes it will benefit the people of the country, despite facing opposition from other politicians. He appeals to their ‘ghairat’ and ‘Mussalmaniyat,’ but carries on a relationship with Laxmi in private, which he later ends due to a nagging conscience. In a press conference with journalists, Khan denies that he has a messiah complex, yet in the privacy of his mansion, he opens his arms to an imaginary crowd and hears ringing applause. 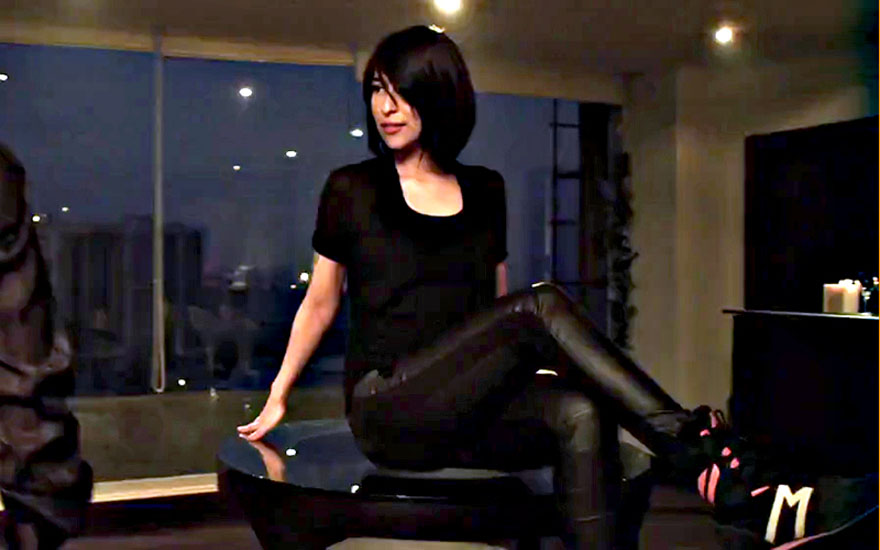 True, Waar is propagandist, but then, such films are made all over the world — even India churns out a few ‘anti-Pakistan’ films every year, to appeal to their audiences’ nationalistic sentiments.

There’s no denying that Waar is a propaganda film with a good deal of chest-thumping jingoism. Criticisms levelled against the film, even if unpopular, are certainly valid. By portraying the Taliban simply as puppets of an ‘enemy country,’ Waar does what a lot of Pakistani citizens and politicians tend to do: absolve the militants, and the Pakistani state, of all responsibility by shifting the blame outside of its own borders. And although there are some clever one-liners and the occasional profound statement — when the Taliban commander mentions that Pakistanis are a nation whose death no one cares about, not even they themselves, the statement hits home and it hits hard — the script definitely could have done with more polishing and fewer clichÃ©s.

But, Waar’s virtues supersede its shortcomings. With visually stunning cinematography, and the three years of hard work the filmmakers have put into it, even critics have to admit that the film has raised the bar a few notches for Pakistani cinema — especially in terms of cinematography. Lashari is a gifted director with a sharp eye for detail. The actors too have given some of their best performances to date. Shaan, Shamoon Abbasi, Ayesha Khan and Meesha Shafi are particularly good, as is newcomer Hamza Ali Abbasi.

While based on some real-life events and facts, Waar is not a documentary; it’s a commercial film with all the ingredients of a mainstream action movie that seeks, above all, to entertain audiences. True, it is propagandist, but then, such films are made all over the world — even India churns out a few ‘anti-Pakistan’ films every year, to appeal to their audiences’ nationalistic sentiments.
If you’re looking for intellectual stimulation, this probably isn’t the right film for you. However, if you like action-packed films with lots of explosions and heroism, Waar is right up your alley.